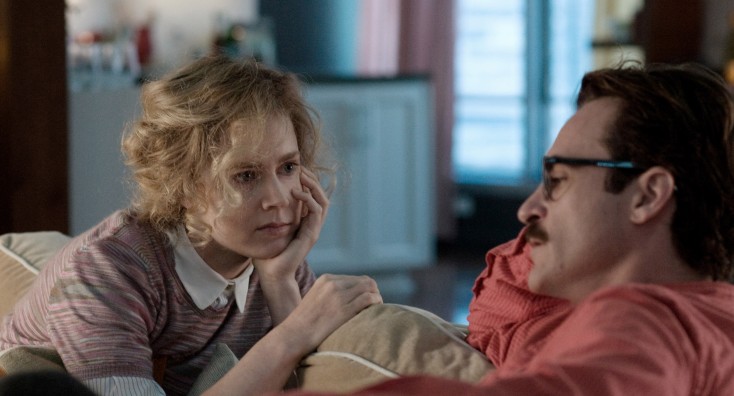 Writer/director Spike Jonze’s thoroughly modern romance “Her” is one of the most thought-provoking films of the year, raising intriguing questions about what constitutes not only love but life itself. The most pertinent here is whether a romantic relationship between a human and a bodiless artificial intelligence is inherently doomed, potentially transcendent or both.

Joaquin Phoenix stars as the going-through-the-motions melancholy Theodore, who makes what looks like a more than comfortable living writing thoughtfully sensitive love notes for other people. The irony is that his own love life has been nonexistent since wife Catherine (Rooney Mara) left him several months earlier because she felt he wasn’t letting her “inside.” Numb and regretful, Theodore is haunted by flashbacks to happy times with her.

Enter Samantha, Theodore’s new computer operating system that comes with a unique personality, the ability to learn and the capability to think independently. Scarlett Johansson is fascinatingly convincing as the disembodied voice of Samantha, whose innocence, curiosity, warmth and playful sex appeal make her the perfect no-complications combination of secretary, confidante and virtual-reality lover.

One of the many impressive things about “Her” is that it succeeds at playing its far-fetched story almost completely straight, as if interpersonal relationships with Siri-style technologies are unavoidable in a world where connections between self-obsessed humans are increasingly hard to make. Samantha soon becomes the equivalent of Theodore’s always-accessible long-distance girlfriend, one whose lack of a physical presence makes her no less real to him.

The idea of a computer consciousness (as opposed to a human-style android) falling in love with its operator dates at least as far back as the tongue-in-cheek “From Agnes—With Love” 1964 episode of “The Twilight Zone,” which featured Wally Cox as the uncomfortable object of affection.

“Her” is closer thematically to 2007’s “Lars and the Real Girl,” despite the two movies having nearly opposite setups. Where Samantha is bodiless but has the equivalent of a brain, Bianca from “Lars and the Real Girl” was a lifelike doll whose personality was provided entirely by lover Lars’ imagination. What the movies have in common is a non-judgmental sweetness that makes us genuinely feel for the unlikely lovers instead of laughing at them.

A minor flaw is that Jonze stacks the deck against human females by having two of them—a disturbingly kinky phone-sex partner and a frighteningly needy date—scare Theodore back into solitude. An interlude with a mute sexual surrogate who allows herself to be used as Samantha’s stand-in also doesn’t end well. Theodore’s platonic friend Amy (Amy Adams) fills the right-under-his-nose role, but the heart wants what the heart wants.

It’s also odd that the screenplay never suggests the possibility of Samantha adopting any sort of avatar that would give her at least a face. In a future where operating systems are so sophisticated they can think and videogame characters are interactive, it’s not unreasonable to believe Samantha would come with a computer-animated image to represent her, or that she could create one on her own.

Another question the movie raises is why Theodore doesn’t raise more questions about life, the universe and everything when he realizes how much Samantha’s intelligence has increased. There’s also the unaddressed matter of whether his or any other human’s job would be safe in a world of super-smart operating systems like Samantha. Skynet, anyone?

Those quibbles don’t spoil this endearing romantic fantasy, however. Long segments of “Her” share the quietly elegant stillness and simplicity that characterized much of Jonze’s ex-wife Sofia Coppola’s “Lost in Translation,” which also starred Johansson. Also like that movie, “Her” arrives at a conclusion that’s movingly bittersweet while seeming naturally inevitable.

With a premise that’s likely to become a real-world issue in the near future, “Her” offers food for thought about whether truly sentient machines eventually will be regarded as legitimate forms of life. If soul itself is the longing of the soulless for redemption, as writer Theodor Adorno maintained in his “Minima Moralia: Reflections on a Damaged Life,” then is Samantha’s yearning to experience feeling sufficient proof that she actually feels?