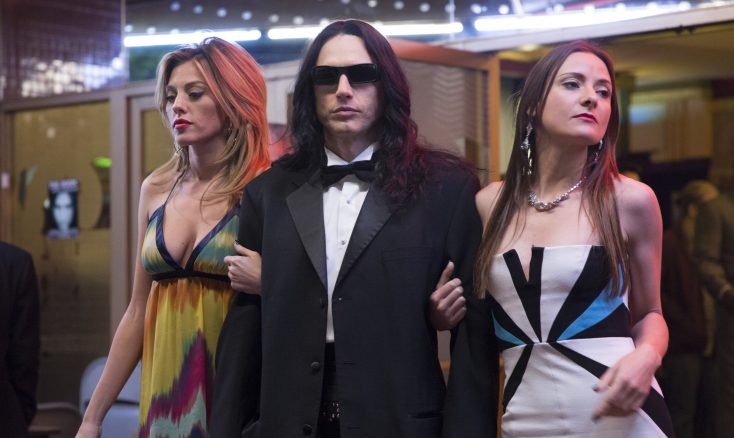 (l-r) Dave Franco as Greg Sestero and James Franco as Tommy Wiseau in THE DISASTER ARTIST. ©A24. CR: Justina Mintz.

When Tommy Wiseau’s “The Room” premiered in 2003, the first-time feature film director, writer, actor and producer was hopeful that he had an Academy Award-winning film on his hands. He believed in his movie so much, which followed a love triangle of sorts between banker Johnny (Wiseau), his deceptive fiancée Lisa (Juliette Danielle) and his best friend Mark (Greg Sestero), that he paid to keep it in theaters for two weeks so the romantic drama could qualify for an Oscar.

Now, almost 15 years later, it’s James Franco’s passion project “The Disaster Artist,” about what’s widely considered “the best worst movie ever made,” that’s getting Oscar buzz and has already won Franco the Gotham Independent Film Award for Best Actor for his performance as the mysterious Wiseau.

Based on Sestero’s 2013 book about the making of “The Room,” “The Disaster Artist: My Life Inside The Room, the Greatest Bad Movie Ever Made,” “The Disaster Artist” tells the tale of two Hollywood hopefuls—Wiseau and Sestero—who decided if no one was going to cast them in any of their movies, they would just make their own. What followed was one of the most bizarre movie-making experiences and bromances ever to come out of Hollywood.

Costing a reported $6 million to make (though it looks more like $6), “The Room” went on to earn only $1,800 during its theatrical release. However, since then it has become a cult classic, earning its money back and then some thanks to midnight screenings where fans dress up like their favorite characters and interact with the film in various ways, like throwing footballs to each other whenever the characters randomly start tossing a football around on-screen, throwing plastic spoons at the movie screen whenever the framed spoon appears in Johnny’s apartment and even yelling “Focus!” the many, many times the film is out of focus. It may not have been the critical darling Wiseau was hoping for, but the movie—now widely considered a comedy—definitely made him a legend in Hollywood. “The Disaster Artist” even opens with some of Hollywood’s biggest names—everyone from Kristen Bell to J.J. Abrams—talking about how much they love the film.

While it’s not necessary to see “The Room” before seeing “The Disaster Artist,” as anyone will enjoy Franco’s heartfelt yet hilarious film since at its core it is a movie about two people following their dreams, viewers will definitely enjoy “The Disaster Artist” more if they see “The Room” first. Franco (who also directs the film, in true Tommy Wiseau fashion) truly put his heart and soul into the project, and his attention to detail—especially when recreating “The Room” shot for shot—can only really be appreciated if audiences have seen “The Room” first. For viewers who haven’t, it can be easy to think the cast is overacting when in reality the only difference between their scenes and the real scenes is that “The Disaster Artist’s” cast is thinner.

Those who have seen “The Room” before will also appreciate the movie so much more after seeing “The Disaster Artist” and amazingly want to go back and watch it again. Not only are some questions—like how in the world the film cost $6 million (partially because Wiseau bought all of his own camera equipment instead of renting it and decided to film the movie in both 35mm and high-definition) and why there are so many plot points, like Lisa’s mother revealing she has breast cancer, that never come back into play (they’re “plot twists,” according to Wiseau)—answered, but the behind-the-scenes tale about the making of the movie is even more unbelievable than “The Room” itself.

If “The Disaster Artist” has any faults, it’s that Dave Franco, who plays Sestero in the film, is far too talented to be believable as the untalented “Room” star. Franco gives what would be a great performance if Sestero himself wasn’t so horrible in the movie. Wiseau may be more famous for not remembering his lines and his awful delivery during the filming of “The Room” (hey, it’s a New Orleans accent!), but truthfully his castmates were just as bad if not worse than him.

James Franco, however, nails his portrayal of Wiseau and deserves every trophy that comes his way this awards season. It’s scary just how much he looks and sounds like the eccentric filmmaker (who, of course, makes a cameo at the end of the film—stay through the credits). Even though “The Disaster Artist” is mainly told from Sestero’s point of view since he wrote the book the screenplay by Scott Neustadter and Michael H. Weber (“The Fault in Our Stars,” “500 Days of Summer”) is based on, Franco manages to make Wiseau someone audiences can sympathize with at times and dislike at others. Viewers will see both sides of the complex character, which is a feat in and of itself considering how easy it would be to paint Wiseau as the villain given how he reportedly treated everyone on the set of “The Room.”

The rest of the cast is comprised of a who’s who of Hollywood mixed in with some of Franco’s usual costars, including longtime friend Seth Rogen. Just seeing who pops up in the movie next is a treat, with such stars as Bryan Cranston, Melanie Griffith and even Sharon Stone appearing in the film and actors like Zac Efron and Josh Hutcherson giving nearly unrecognizable performances.

While “The Disaster Artist” doesn’t answer all of the questions fans of “The Room” might have (like, whatever happened to the Johnny-is-a-vampire plot twist? And how old is Tommy Wiseau anyway?), it’s a hilarious look at just how much work went into a movie that looks like it was thrown together. Tommy Wiseau’s “The Room” never won an Academy Award, but its behind-the-scenes story just might.