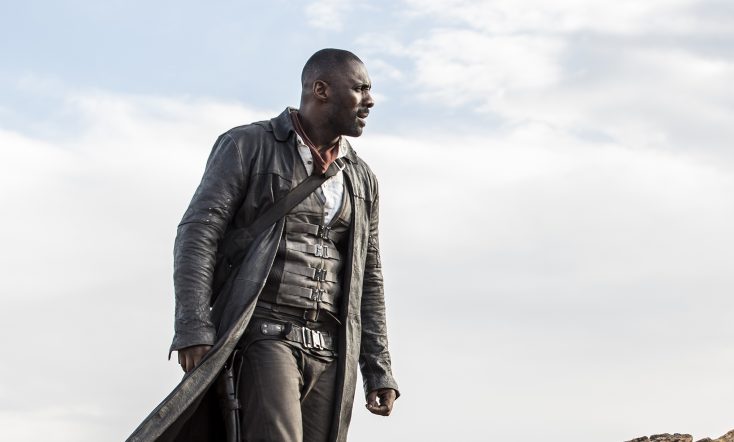 Like 2011’s unfairly unappreciated “Cowboys and Aliens,” which attempted a similar colliding-worlds concoction, this beautifully shot adventure is played surprisingly straight. And that’s saying something, in a frenziedly far-fetched tale about an evil sorcerer abducting gifted children from various worlds to power a death-ray designed to destroy a massive tower at the center of the universe that keeps terrifying outer-darkness demons from getting in and destroying everything. Oh, and that murderous villain’s never-say-die adversary is a vengeance-bent gunslinger whose magic-bullet-shooting revolver is forged from the metal of King Arthur’s sword Excalibur. Everything here is so brazenly outrageous, in other words, that the plot easily could have been played as a total tongue-in-cheek parody, which makes it impressive that there’s almost no winking at the audience on display.

Tom Taylor plays believably troubled New York teen Jake Chambers, who has disturbing dreams of a miles-high tower and an evil Man in Black. His frustrated mom and even more fed-up stepdad are about to ship him off to a special psychiatric clinic when Tom notices dead-giveaway seams in the necks of two not-exactly-human would-be kidnappers who arrive to take him there. After a rooftop chase and a terrifying ordeal in a may-as-well-be-haunted house, he ends up in the world of his visions.

Idris Elba is excellent as the tersely tough and doggedly determined Roland Deschain, aka the Gunslinger. He is everyone’s last hope for protecting the tower against all enemies, but his sole focus is on killing the vicious sorcerer Walter, aka the Man in Black, for murdering Roland’s father.

Matthew McConaughey is scene-stealingly, Voldemort-level vicious as the casually cruel Walter, whose power of suggestion is so effective that he can kill simply by telling people to stop breathing or burn. Onetime Victoria’s Secret model Abbey Lee plays his gorgeous deadpan henchbabe, who seems to have modeled her way-too-much-makeup and tight-red-minidress look on old Robert Palmer music videos. (Look them up, kids.)

The Gunslinger’s seemingly endless ammo supply is good for extended shoot-’em-ups with “Matrix”-level displays of firepower. Settings such as a desolate tornado-columned wasteland, a decayed theme park and Walter’s dismal high-tech base are suitably creepy. In one of many visually interesting scenes, a telepathic recap of past events is shown with overlapping time-lapse images in Jake’s bedroom back on Earth.

Before the movie’s release, some readers worried that the elaborate storyline in King’s “Dark Tower” novels (and Easter-egg elements within them that tie all of King’s books together into a single all-encompassing multiverse) might prove hard to adapt. Speaking as someone who has not read the series, I have no idea how faithful the movie is to its source material—but that also means I can set other newcomers’ minds at ease by saying that they will have no trouble jumping into the screen story without any background from the books. And even if you’ve never heard of “The Shining,” Jake’s psychic “shine” abilities still will make sense.

The film has echoes of everything from “The Wolverine” (“I heal fast,” notes the seemingly indestructible Gunslinger) to the torture-chair from “Brazil” to the “Chitty Chitty Bang Bang” Child Catcher to the not-entirely-happy ending of “Time Bandits,” yet still manages to seem fresh. Also, the last-act showdown between the Gunslinger and Walter features a jaw-droppingly ingenious game-over feat that manages to be simultaneously preposterous and yet incredibly satisfying. Which is a good description of the movie as a whole, in fact.

A prequel TV series featuring the Gunslinger is planned, but a big-screen sequel that continues this wild, wild weirdness would be even more welcome.