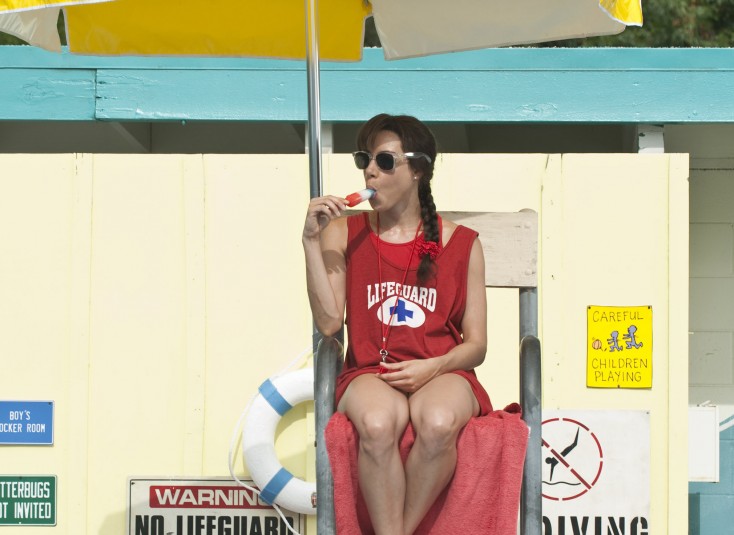 (NOTE TO EDITORS: DUE TO THE SEXUAL NATURE OF THE FILM, YOU MAY WANT TO DECIDE WHETHER TO USE WORDS SUCH AS “TEABAGGING” THAT ARE INCLUDED BELOW. WE HAVE TRIED TO AVOID USING ANYTHING THAT WOULD BE INAPPROPRIATE BUT OBVIOUSLY EACH OUTLET HAS ITS OWN STANDARDS. THE EMBARGOED HAS BEEN LIFTED.)

You know those so-called critics who constantly get quoted in movie ads saying that every comedy they see is “laugh-out-loud funny?” This time, you can believe the hype. If you don’t find yourself laughing out loud more than once during the silly, smutty but surprisingly sweet “The To Do List,” you’re probably missing not only a sense of humor but a pulse.

This carnal coming-of-age romp may be the dirtiest teen sex comedy ever made that includes absolutely zero nudity. Aubrey Plaza (“Scott Pilgrim vs. The World,” TV’s “Parks and Recreation”) stars as Brandy Klark, a socially backward bookworm determined to lose her virginity before starting college. Her friends help her assemble a list that includes nearly every conceivable activity involving the male and female naughty bits.

If nothing else, the movie is guaranteed to widen the vocabulary of a lot of viewers. Brandy is so amusingly naïve that the multicolor notes she includes on her handwritten check-off list include “British?” next to the term “Teabagging,” and “Uncle Andy’s boat” next to “Motorboating.”

Equally inexperienced Cameron (Johnny Simmons), who is unaware of the list and has a wholesome “study buddy” crush on Brandy, is taken aback by her eagerness to experiment. That doesn’t mean he isn’t willing to participate in the process, however.

Meanwhile, Brandy has the hots for the blond and unbelievably buff Rusty Waters (Scott Porter), who is refreshingly unjerklike for a movie like this. Rusty is a fellow summer-job lifeguard with Brandy at a less-than-deluxe public pool run by lazy smartass Willy (Bill Hader). Other enjoyable supporting characters include Alia Shawkat and Sarah Steele as Brandy’s best friends, Rachel Bilson as her hilariously bitchy big sister, Clark Gregg as her conservative but overwhelmed dad and Connie Britton as her extremely broadminded mother.

Plaza is a marvel as Brandy, gleefully engaging in all manner of embarrassingly compromising positions and slapstick situations. The movie’s homage to the magical “Caddyshack” moment wherein Bill Murray eats a Baby Ruth is priceless.

There’s also lots of humor to be mined from the movie’s 1993 Boise, Idaho, setting. Touching Rusty’s bare chest, Brandy says, “You feel like Marky Mark looks.” She’s later told that she has to stop dressing like Tracey Gold, and her totem is a framed photo of Hillary Rodham Clinton. Even the movie’s credits, emblazoned on nostalgic ’90s artifacts around Brandy’s bedroom, are wonderfully stylish and clever.

The things that are wrong with the movie don’t ruin its charms. Every cast member who is supposed to be playing a teenager is too old by several years. Also, the standard Hollywood definition of “plain Jane” applies: Brandy is supposed to be a nothing-special dateless dork, but she’s obviously good looking and has a great body from the get-go. Even though Brandy is model-slim and unmistakably sexy in a sleek one-piece red swimsuit, for example, she thinks she will look more appealing in an ill-fitting bikini she scavenges from the pool’s lost and found. Right.

The plot goes a little off track when an element of class warfare is introduced in the form of a rivalry with a country club, but by then you’ll be so taken with Brandy and company that you’ll follow them anywhere.

Director-writer Maggie Carey’s first feature is so much foul-mouthed fun that “The To Do List” belongs at the top of the must-see list.