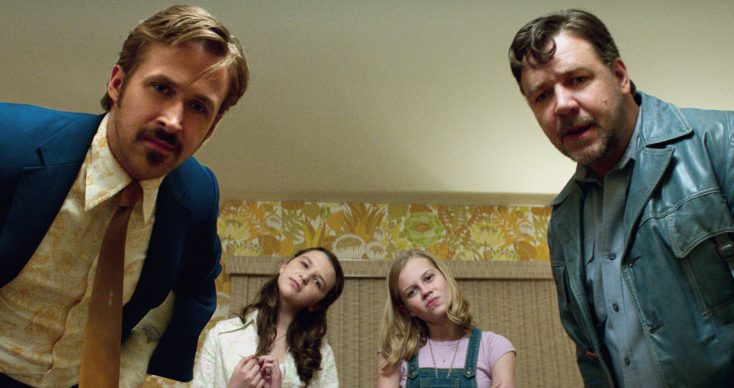 While at first glance this year’s “The Nice Guys” and 2015’s private-eye caper “Inherent Vice” might have some similarities (both are Warner Bros. films, both stories take place in Los Angeles in the 1970s, both follow down-on-their-luck private investigators, both are R-rated comedic crime dramas), the two films couldn’t be more different from one another. While “Inherent Vice” is more dramatic and slow paced, “The Nice Guys” is a delightful comedic romp viewers are sure to enjoy.

The film follows private eye Holland March (Ryan Gosling) and hired enforcer Jackson Healy (Russell Crowe), whose paths cross when they discover that the young woman Holland is trying to find, Amelia Kuttner (Margaret Qualley, “The Leftovers”), has paid Jackson to keep Holland—and anyone else—from finding her. When Jackson is attacked in his apartment by two men also trying to find the young activist, he decides to hire Holland once again to find Amelia (who has since gone missing) and ultimately protect her from being killed.

Along the way, the two are also hired by Amelia’s distraught mother, Chief of California Department of Justice Judith Kuttner (Kim Basinger), who claims to only want her daughter home safe and sound despite their different outlooks on life. As more clues are uncovered and more people who are close to Amelia turn up dead, Holland and Jackson start to realize that there’s more to this case than just some missing woman on the run.

While the smartly written script by writer-director Shane Black (“Iron Man 3”) and first-time screenwriter Anthony Bagarozzi has enough twists and turns to keep audiences guessing until the very end just who the film’s true villain is and how everything connects to the movie’s explosive opening sequence involving the death of porn star Misty Mountains (Murielle Telio, “The DUFF”), it is Gosling and Crowe’s chemistry together that truly keeps audiences entertained. Both work off of each other wonderfully, keeping viewers laughing throughout the film’s near two-hour runtime without ever resorting to mismatched buddy cop clichés. Gosling, in particular, is hilarious with his sloppy drunken antics and lady-like screams while Crowe plays the mysterious yet sympathetic straight man who just wants to feel useful and save Amelia’s life.

The true star of “The Nice Guys,” however, isn’t a guy at all. Angourie Rice (“Walking with Dinosaurs 3D”) steals every scene she’s in as Holland’s young daughter Holly, a little girl who is much wiser than her age. The young private eye in training ends up being Holland and Jackson’s biggest asset, even when she’s not supposed to be working the case. While she’s not afraid to help take down the bad guys, Holly serves as Jackson’s moral compass throughout the film, keeping him from killing others whenever possible to make him a more honest man. Her character is an interesting and refreshing addition to the story, and her performance on-screen is a bit reminiscent of Anna Chlumsky’s in “My Girl.” Viewers will leave the film expecting to see bigger and better things from the scene-stealing talent.

Basinger and Matt Bomer, who plays the much talked about hitman in the film, John Boy (no, not “The Waltons’” John-Boy), sadly aren’t given enough screen time to really shine. Even though audiences will be left guessing whether or not Basinger’s character truly has her daughter’s best interests at heart, Judith’s ambiguity is more of a result of strategically placed revelations that happen throughout the movie while Holland and Jackson are on the case than Basinger’s actual performance.

The Blu-ray/DVD Combo Pack with Digital HD (Warner Bros. Home Entertainment, MSRP: $35.99) is surprisingly sparse on special features. “Always Bet on Black,” which is also included on the standard definition DVD release (MSRP: $28.98), features the cast and crew praising (and riffing) on the odd auteur, who Gosling notes “should have a Ph. D. in noir.” The behind-the-scenes featurette looks at how important it was for the writer-director to “mix things up” and balance the comedy and drama throughout the film. Probably the highlight of the brief extra (which is under six minutes long) is when Gosling and Crowe joke about how the “Lethal Weapon” scribe has worked on every movie known to man—including “Gone with the Wind.”

The only other extra included on the release, the Blu-ray exclusive “Worst. Detectives. Ever. Making ‘The Nice Guys,'” is a six-minute featurette that spotlights everything from the three villains in the movie to the fact that no kids were thrown out of any windows during the making of the film. While it’s interesting to learn that the premise of “The Nice Guys” was once considered for a TV series, it would have been nice to have more detailed featurettes on the costumes, production design and casting included on the Blu-ray release instead. An extra just on Gosling and Crowe seems severely overlooked, although Gosling does praise his co-star during the making-of featurette, noting what a good physical comedian the “Gladiator” star is even though people have never really seen him do physical comedy before. A gag reel would have also been a nice inclusion, as one can’t help but feel that there’s a wealth of outtakes out there given how much Gosling and Crowe seem to crack each other up.

Although there are times the script seems a little forced, especially toward the end of the film, for the most part “The Nice Guys” keeps viewers’ interest right from the start. It might not be the funniest comedic crime drama ever written, but it is fun and highly entertaining—which is more than can be said for the unnecessarily highbrow “Inherent Vice.”