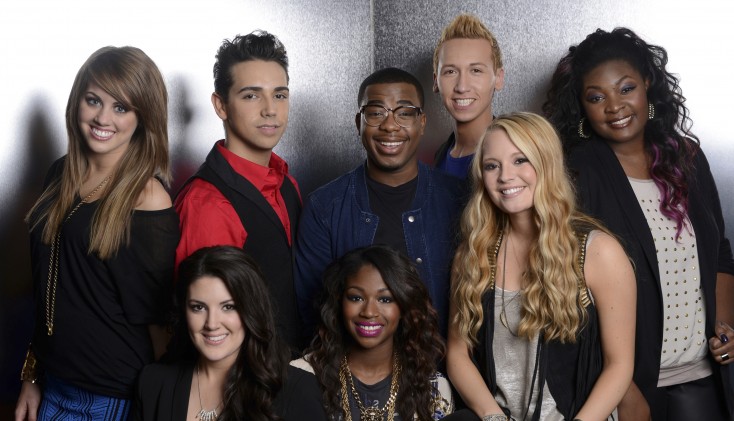 HOLLYWOOD—It was no secret during the auditions this season of “American Idol” that there was, shall we call it, “slight tension” between two of the new judges. As Season 12’s live shows began, though, the ladies of the judging panel were able to play nice, except for a few backhanded comments from Mariah Carrey or a look or two from Miss Nicki Minaj.

So when fireworks sparked at the “American Idol Does Motown” show, it would be easy to assume that Mariah and Nicki were at it again, especially when the two divas showed up wearing similar, bright red dresses. Each gave annoyed looks when host Ryan Seacrest pointed out that fact early in the show.

Surprisingly, though, the tension was on stage, and it came from contestants Burnell Taylor and Devin Velez. Devin, along with fellow contestants Lazaro Arbos and Burnell Taylor performed “Can’t Help Myself,” which was harshly critiqued by Judge Nicki.  Minaj was so put off by the trio’s rendition, she demanded they exit the stage and turned away as if looking at them was too painful. Ouch!

The contestants didn’t leave the stage right away, though, as Seacrest gave them a chance to respond. Burnell was the first to speak up. He said he did what he was supposed to do but didn’t directly address Nicki’s remarks.  There are many ways to interpret that although, as a group, they were slammed and he felt he showed up and did his part. Burnell then followed up with, “not to bring anyone under the bus but … this is a competition so…”  The camera then cut to Nicki, who shook her head violently to signify to Burnell that stopping right there would be in his best interest.

Devin then chimed in that he learned his parts and  “tried to save a couple people” (clearly meaning the other two contestants) as a retort. Only Lazaro didn’t take the time to “bring anyone under the bus,” as Burnell so succinctly worded it.  He said the song was hard to learn and he felt he didn’t have enough time to practice so he forgot some of the words.  Ryan mentioned it was his dad’s favorite song and Lazaro apologized for ruining it.

It was clear that even with the assumed solidarity among the contestants in the form of group performances and Ford Focus commercials, the contestants know this is a competition and they were ready to point fingers at each other after receiving some of the harshest words from Nicki this season.

Overall, there were highlight performances from all of the female contestants with only Angie Miller getting negative feedback.  The judges felt she wasn’t giving them an organic performance and Nicki chided her for looking “overtly sexy.”

It’s looking to be a girl’s season this year ,and it will be interesting to see if any of the remaining male contestants in the competition will step it up to show that their sex has a fighting chance to be crowned top dog in Season 12’s “American Idol.”