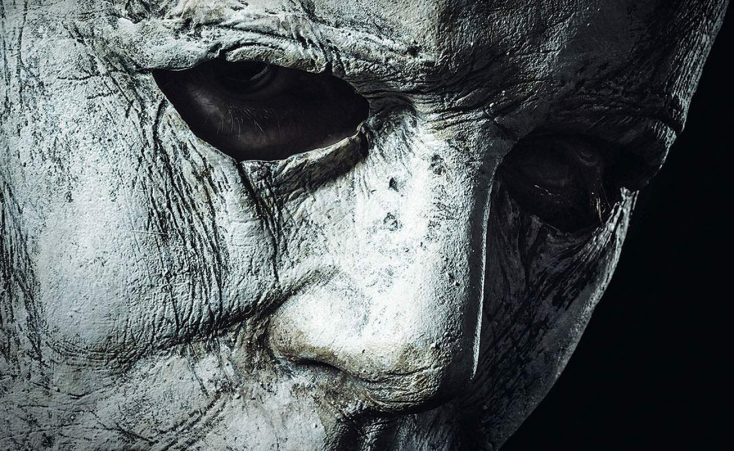 After years of psychological scrutiny, Myers is set to be transported from a mental institution to a prison on Halloween, of course. Haunted by what happened to her years ago, Laurie has rigged her house with cameras and a sizable cache of weapons. She is estranged from her adult daughter Karen (played by Judy Greer) but surprisingly close with her granddaughter Allyson (played by Andi Matichak making her feature film debut).

“Halloween” also stars Will Patton as Officer Hawkins who was just a rookie when Myers went on his killing spree and Nick Castle, reprising his role as the masked, mute and menacing Myers. Though secured and guarded in the transport bus, Myers manages to escape, leaving a trail of carnage in his wake. Audiences can guess who he’s coming for but his prey has been preparing for this faceoff all her life.

Packed with bonus features including chilling deleted and extended scenes as well as special featurettes showing behind the scenes looks at creating the film, Halloween delivers spine-chilling, hair-raising intensity and thrills to both new and repeat viewers.

This sci-fi thriller centers on a family’s fight to survive a solar disaster. As skies darken and hopes grow dim, the Beatys try to stay sane in a lavish home with every possible comfort—except sunshine. Raymond (Daly) plans to have his family transported to a secure underground bunker. But as he makes a gruesome discovery, the greatest threat to the Beatys’ survival may be near—or inside—their home.

Directed by Batan Silva (“Mayans M.C.”) the “After Darkness” DVD will be available for the suggested retail price (SRP) of $19.98.

Travolta plays speedboat racing champ and multimillionaire Ben Aronoff, who is hiding a dangerous secret life: His boats are being used to move cocaine through Miami. Suddenly caught in a crossfire between DEA agents and the mob, Ben makes a desperate stand to save his family and his empire in this action-filled thriller based on an incredible true story.

“Speed Kills” is currently available On Demand. Based upon the true-crime book of the same name, the action thriller also stars Katheryn Winnick (“50 First Dates,” “The Dark Tower”) and Jennifer Esposito (“Crash,” “Summer of Sam”) and Matthew Modine (“47 Meters Down,” “The Dark Knight Rises”)

Startling tales of sex, betrayal and corruption unravel in a Copenhagen hotel, where nine disparate lives intersect by chance or fate in “Room 304,” which is available starting Tuesday Jan. 15 on DVD and Digital.

In this Scandinavian psychological thriller, a hotel manager peers into the abyss of his empty life, leading to devastating consequences for himself, his wife and his mistress. A Spanish stewardess reaches out for intimacy and finds it in a most unexpected way. A reserved concierge is forced out of his shell by a shocking event, and an Albanian refugee gets a chance to avenge his wife, but ends up discovering something surprising instead.

Celebrate the show’s 20th anniversary with this marvelously musical collection of 20 song-and-dance-filled episodes, along with a symphony of extras created exclusively for this release available now on DVD. So, grab “A Bag o’ Weed,” roast a “Candy Quahog Marshmallow!” and enjoy “The FCC Song” with your favorite “Shipoopi,” because “You’ve Got a Lot to See” (and hear) when you watch “Family Guy’s 20 Greatest Hits.”