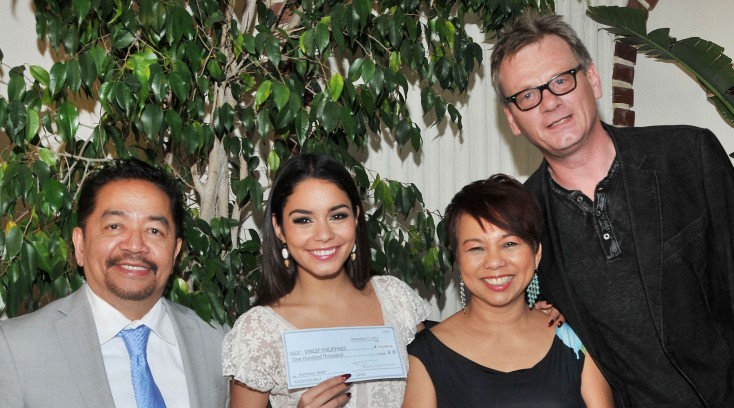 HOLLYWOOD—In its continued support of philanthropic endeavors, the Hollywood Foreign Press Association best known for its Golden Globe Awards Show, presented a check for $100,000 to Filipina-American actress Vanessa Hudgens on behalf of UNICEF Philippines in response to the devastation Typhoon Haiyan left in the Philippines.

HFPA President Theo Kingma presented the check to Hudgens at the HFPA office in West Hollywood, Calif., along with HFPA members Ruben Nepales and Janet Nepales.

HFPA member Ruben Nepales explained that the organization selected UNICEF Philippines because it takes care of the youngest victims of the typhoon. Over six million children were affected by the natural disaster on the island nation. The members of the HFPA unanimously approved the donation after seeing the effects the typhoon had in the central region of the Philippines.

Vanessa Hudgens says she was honored to be accepting the donation for UNICEF Philippines.

“It means so so much to me,” she said. “I mean it really is an honor. I want to try to help as much as I can because it so close to home for me being Filipino. My mom’s from the Philippines. I am so grateful.”

The HFPA also helped UNICEF Philippines last year, donating $25,000 in response to the devastation of Tropical Storm Washi that killed 2000.