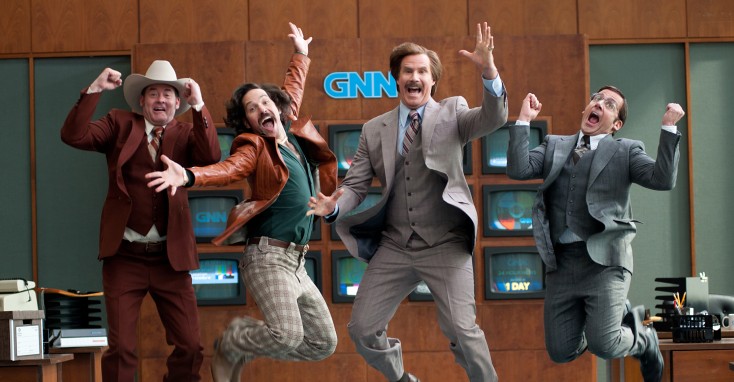 More adequate than legendary and far too long, “Anchorman 2: The Legend Continues” brings back Will Ferrell’s pompously bombastic news reader Ron Burgundy for a seven-years-later followup that relies a little too much on obvious satire when it should have stuck with absurd silliness.

The original “Anchorman: The Legend of Ron Burgundy” focused on a hilariously chauvinistic San Diego news team overreacting to the hiring of the station’s first female anchor (Christina Applegate’s beautiful but businesslike Veronica Corningstone). More about the people than the profession, its only wink at something specifically mockworthy in real-world broadcast journalism was a subplot about the media’s obsession with the birth of a panda.

While the sequel does include plenty of enjoyably absurd moments (Ron’s talent for playing jazz flute now includes some “Blades of Glory”-style ice-skating moves, and his diplomatic dog Baxter still communicates with other species), its screenplay (by Ferrell and director Adam McKay) goes out of its way to hit a lot of embarrassingly easy targets.

In bygone 1980s New York, Burgundy, reporter Brian Fantana (Paul Rudd), sportscaster Champ Kind (David Koechner) and weatherman Brick Tamland (Steve Carell) have been hired to host the dead-of-night shift at the first 24-hour cable news network. Although its GNN name evokes CNN, the place quickly takes on every negative aspect of Fox News thanks to Ron’s suggestions (graphics overkill, patriotic jingoism and a mission to give viewers what they want as opposed to what they need). Those parts of the plot are as unsubtle and heavy-handed as the plodding political skits that open most episodes of Ferrell and McKay’s “Saturday Night Live” alma mater.

Similarly, it’s odd that the screenplay has turned Champ into a religious bigot who thinks the census is a plot to turn children gay. Dimwitted Brick finds love with a likewise mentally challenged GNN secretary (Kristen Wiig) in the movie’s least amusing subplot. And when Fantana mentions wanting to rejoin his “ladykiller” friends O.J. Simpson, Phil Spector and Robert Blake in L.A., the joke seems too rudely crass in what’s supposed to be a loopy light comedy.

Another change is that the once swaggeringly cocky Ron is now far too intimidated by GNN pretty-boy prime-time anchor Jack Lime (James Marsden) and station manager Linda Jackson (Meagan Good). His affair with the black Jackson becomes an attempt to show Ron overcoming racism the same way he rose above sexism in the first movie, but a scene in which he jives his way through dinner with her family feels stale.

The movie begins with Ron separating from wife Veronica after she is promoted at the same time he is let go from the broadcast network where they worked together. The events of “Anchorman 2” apparently take place before the “where are they now” revelations at the end of the first movie, which said Champ ended up getting fired from an NFL commentator job, Brian was named host of the Fox reality show “Intercourse Island” and Brick became an advisor in the Bush White House. Instead, Ron finds Champ running a chicken restaurant that secretly serves bats (aka “chicken of the cave”), Brian photographing cats for a living and Brick delivering the eulogy at his own funeral.

In a scene that will be familiar to fans of the first “Anchorman,” Brian’s cabinet of exotic colognes has been replaced by one filled with a variety of dubiously effective condoms. “Anchorman 2” also shamelessly restages two set pieces from its predecessor, upping the ante on a rumble between competing news teams (with lots more cameos) and concluding with another man-against-nature finale.

New material that works includes Ron’s pathetic stint at Sea World that ends in a suicide attempt, a delirious slow-motion Winnebago disaster and the team’s on-air indulgence in trying a new drug called crack. A wonderfully bizarre segment puts a blind Ron in a lighthouse where he nurses a shark back to health and gets good at pencil portraiture. And Ron’s best deadpan-weird pronouncement of many may be, “As the wise man once said: So?”

The movie works best when it sticks to that kind of funnybone-tickling outright farce instead of on-the-nose obvious parody. We already know that things like the news industry’s fascination with airing live car chases is stupid. But seeing the ghost of Stonewall Jackson (John C. Reilly) as a soul-sucking member of the Liam Neeson-led History Channel gang, now that’s entertainment.