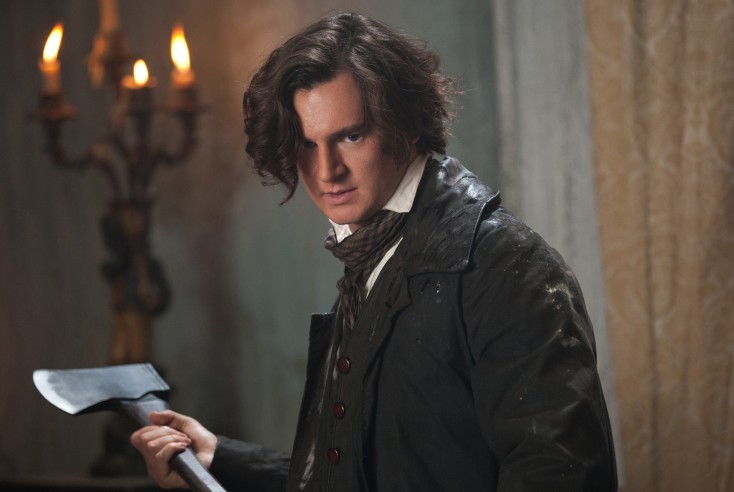 Too simpleminded to take seriously yet too stodgy to be much fun, “Abraham Lincoln: Vampire Hunter” is like a house divided against itself. And you know what Honest Abe said about those.

The title is a great throwaway gag that could have inspired an amusing “Grindhouse”-style fake-movie trailer. But screenwriter Seth Grahame-Smith (adapting his bestselling novel) can’t stretch the idea far enough to make it work as a full-length feature.

Lincoln somehow keeps his bloody moonlighting escapades a secret from the living while he works days as a shopkeeper, lawyer and eventual politician. But the vampires, led by the smugly superior Adam (Rufus Sewell), know who and where he is from early on. Vampires with superhuman strength who can exist in daylight, survive gunshots and become invisible would have ample opportunities to eliminate Lincoln on any number of occasions. But no!

Instead, they wait apparently for years before enticing Lincoln to a New Orleans plantation ambush by kidnapping his longtime friend Will (Anthony Mackie). Adam’s proposed alliance with Lincoln, using an unconvincingly strained argument that vampires are as oppressed as slaves, makes no sense. Neither does the fact that Lincoln and company manage to escape on a wagon that’s missing a wheel. The logic flaws in this movie can be summed up by the fact that the too-fast-to-see vampires move with incredible speed…except when they don’t.

One of the movie’s best action scenes, which puts Lincoln and a vicious vampire in the middle of a horse stampede, unfortunately takes place in a dust-cloud brown-out. Later, a pretty spectacular train-bridge disaster may remind fans of a similarly thrilling derailment in Bekmambetov’s 2008 “Wanted.”

The movie’s attempt to fit Lincoln’s secret hobby into his real-life biography and a factual historical framework is undercut by a very obvious question: Why wouldn’t Lincoln have alerted the public right away about vampires in their midst, instead of letting the bloodsuckers survive as a murderous subculture for decades?

If “Abraham Lincoln: Vampire Hunter” had been strictly slapstick, questions like that wouldn’t have mattered as much. The filmmakers’ attempt to keep things more dramatic than deranged makes the movie seem not only dumb but intermittently dull. And that’s an undebatably deadly combination.