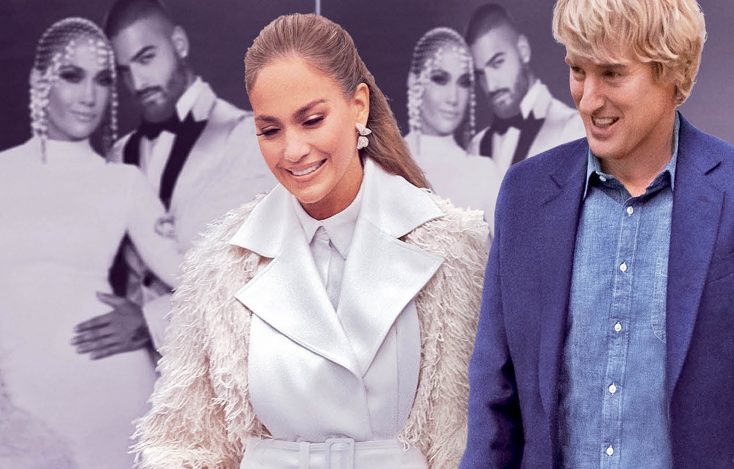 Charlie Waldo (Hunnam) is an ex-LAPD superstar who left the force and now lives a life of simplicity and solitude deep in the woods. Alistair Pinch (Gibson) is an eccentric actor who spends his days drunk on the set of his TV show. When Pinch’s wife is found dead, he is the prime suspect and Waldo is convinced to come out of retirement to investigate what happened. The case finds Waldo contending with gangsters, Hollywood executives and pre-school teachers, all in pursuit of clearing Pinch’s name—or confirming his guilt.

The home entertainment editions include exclusive never-before-seen bonus content: deleted scenes, a gag reel and a look behind-the-scenes with Lopez, who serves as a producer as well as star of the film.

A heartbroken pop star (Lopez) is slated to marry her pop star fiancé (Maluma) on stage but after discovering right before the big moment that her betrothed has been untrue, she instead marries a stranger from the audience, who happens to be a high school math teacher (Wilson).

Against all odds, their relationship between this pop diva and ordinary Joe develops into something real—but can their love survive the limelight?
The film is directed by Kat Coiro (“It’s Always Sunny in Philadelphia,” “Dead to Me”), the film features global music megastar Maluma, John Bradley (“Game of Thrones”), Sarah Silverman (“Wreck-It Ralph Breaks the Internet”) and Chloe Coleman (“Big Little Lies”). The film is written by John Rogers (“The Librarians”), Tami Sagher (“30 Rock”) and Harper Dill (“The Mick”).

The drama tells the story of Margaret Humphreys (two-time Oscar nominee Emily Watson, “Breaking the Waves,” “Hilary and Jackie”), a social worker from Nottingham who uncovered one of the most significant social scandals of recent times: the deportation of thousands of children from the United Kingdom to Australia. Children as young as four had been told that their parents were dead, and been sent to children’s homes on the other side of the world. Many were subjected to appalling abuse. They were promised oranges and sunshine: they got hard labor and life in institutions. Almost single-handedly, against overwhelming odds, and with little regard for her own well-being, Margaret reunited thousands of families, brought authorities to account and drew worldwide attention to an extraordinary miscarriage of justice.

The DVD includes the bonus features “The Making of ‘Oranges & Sunshine,’” interviews with the cast, writer and director as well as trailers.

Set in a Czech seminary during the communist regime, a pair of novitiates are forced to decide between becoming informants or secret police targets in this brooding thriller.

With the school on the brink of dissolution, and its head priest a target for blackmail, students Michal and Juraj will have to choose between collaborating with the government as informants, or becoming targets of the secret police. Shot in striking, atmospheric black-and-white, “Servants,” from director Ivan Ostrochovsky, is both a brooding morality tale and a taut political thriller. It is in Slovak with English subtitles.

The DVD of “Servants” includes Martin-Christopher Bode’s short film “A Good Story,” with cinematography by Christopher Doyle. It is in German with English subtitles.

For the first time in the cinematic history of Spider-Man, our friendly neighborhood hero’s identity is revealed, bringing his Super Hero responsibilities into conflict with his normal life and putting those he cares about most at risk. When he enlists Doctor Strange’s help to restore his secret, the spell tears a hole in their world, releasing the most powerful villains who’ve ever fought a Spider-Man in any universe. Now, Peter will have to overcome his greatest challenge yet, which will not only forever alter his own future but the future of the Multiverse.

Director Yoon Jae-keun (“Heartbeat”) along with award-winning martial arts choreographers Park Young-sik and Chung Seong-Ho (SAG Awards, Best Stunt Ensemble, “Squid Game”) bring to life the action-packed thriller about a man who loses his memory and subsequently wakes up in a new body every 12 hours.

Breaking all cinematic conventions, the film from British director Alex Cox, tells the story of 19th-century American adventurer William Walker (Ed Harris), who abandoned a series of careers in law, politics, journalism, and medicine to become a soldier of fortune and, for many months, the dictator of Nicaragua.

Made with mad abandon and political acuity—and the support of the Sandinista army and government during the contra war—the film uses this true tale as a satirical attack on American ultra-patriotism and a freewheeling condemnation of “Manifest Destiny.” Featuring a powerful score by Joe Strummer and a performance of intense, repressed rage by Harris, Walker” remains one of Cox’s most daring works.

Bonus features include a restored high-definition digital transfer, approved by director Cox, with uncompressed monaural soundtrack on the Blu-ray, audio commentary by Cox and screenwriter Rudy Wurlitzer, “Dispatches from Nicaragua,” a documentary about the filming the movie, “Moviemaking and the Revolution,” reminiscences from an extra on the film “Walker 2008” and “On the Origins of ‘Walker,’” two short films by Cox (Blu-ray only), behind-the-scenes photos, and more.

A military commander (Rourke) dispatches an elite team of American soldiers on a deadly rescue mission after a World War II plane crashes. Trapped behind enemy lines in Germany’s Black Forest, the men are confronted by a coven of witches.

Front Row Features is giving away a Blu-ray copy of South Korea’s award-winning, action-packed thriller “Spiritwalker”—which has been optioned by producer Lorenzo di Bonaventura (the “Transformers” and “G.I. Joe” movies) for a possible Hollywood remake — to three lucky readers. To enter the contest, simply email socalmovieeditor@aol.com by April 18 for your chance to win. Good luck!