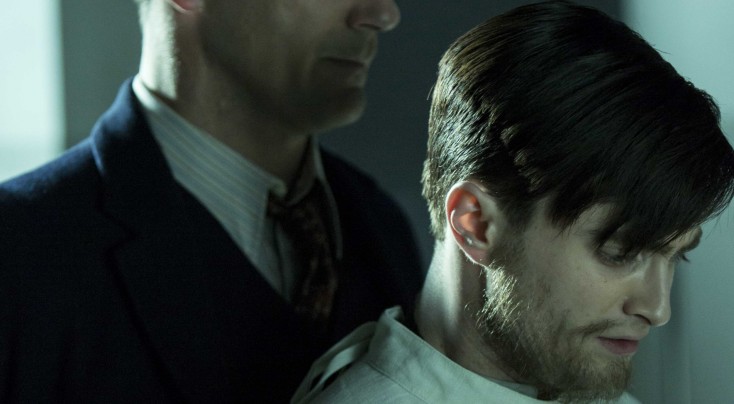 HOLLYWOOD—Former “Harry Potter” star Daniel Radcliffe revealed Tuesday that he has not read J.K. Rowling’s new story involving an older version of the wizard he played in eight films, but he intends to do so soon.

Speaking via satellite from New York to the Television Critics Association gathering in Los Angeles to address the press about the next season of Ovation’s “A Young Doctor’s Notebook,” in which he co-stars with “Mad Men” star Jon Hamm, Radcliffe said he plans to read the Rowling piece, which was recently posted on her website Pottermore. However, when asked about reprising the wizard character, he responded he would have to think about it if the opportunity arose.

“My inclination is to say no,” said the 24-year-old actor, who is starring in the Broadway production of “The Cripple of Inishmaan.”

“I don’t think it’s a question that’s hypothetical at the moment, really,” he added. “What she’s written, I haven’t read it yet. I am going to read it. But it is, as I understand, a very, very short piece that I’m not sure is worthy of adaptation to film, but I don’t know. He’s at least 12 years older than I am now. So I don’t think I’ll have to worry about that for a long time, I’m hoping.”

The Rowling update is written as a gossip-column item by “Harry Potter” character Rita Skeeter in the “Daily Prophet.” Harry is in his 30s and married to best friend Ron Weasley’s sister Ginny and they are attending the Quidditch World Cup. (Coinciding with the actual World Cup in Brazil.)

On the TV series, Radcliffe and Hamm share the role Dr. Vladimir Bomgard, a Russian doctor in a small village. The two have numerous scenes together. In the first season, the two shared a bath.

The series is scheduled to return to Ovation on Tuesday, August 19, with the premiere of the four-episode arc.

Radcliffe said of the series: “On the whole, this series is an incredibly fun one to film. Jon is a very funny guy, and we are very irreverent, and yeah, we have a lot of fun, like doing the bath scene together in the first series was one that we kind of, as soon as we both got in it, we were, like, “Oh, man. This photo is going to go everywhere.” So (we) were aware of the bizarreness of the situation.”

As for the dancing sequence with Hamm, he explained, “Dancing with Jon was great fun. I had to dip him at one point, which was not easy. We got a couple of lifts in there as well. It’s incredibly fun working with him. … His experience working on “Mad Men” means he’s sort of a brilliant technical actor as well as being very good fun to hang around with.”

Radcliffe says he is flattered he was cast to play the younger version of the character Hamm plays, even though they have a six-inch height difference. (Hamm is taller.)

“It was incredibly flattering that he suggested me to play the young him, which is an incredible compliment,” he said. “But with the height difference, we were thinking the show is so crazy anyway that people are either going to just go with it and be enjoy it so much that they don’t care about that, or if they get hung up on that, then there’s going to be plenty of other logical problems that they are going to find with us. So it definitely wasn’t something that we lingered on too much in terms of worrying about that. It was then about just finding the points where we could find parallels between Jon and me, and just link our characters together.”

One of the ways the show has gotten around the physically differences between the actors, is that they’ve given the doctor character a few tics that make it obvious that it is the same man.

“There’s a little fidgety tick that both Jon and my character has when we are nervous,” Radcliffe said. “We fiddle with our ear, which kind of links us together. We also do a couple of match cuts like, in the first series, when I’m lighting a cigarette, and on the third strike of the match, it changes from Jon to me. So we do visual stuff to connect the two and, hopefully, keep reminding people that we are, in fact, the same person.”

Radcliffe assures that he is in no way trying to forget or escape his work on the eight “Harry Potter” movies but that, as an actor, he wants to play a lot of different characters.

“It really is about the fact that that the most exciting way of doing my job is to try to do as many different styles of (acting),” he said. “Obviously, there’s a part of me that is connected to Potter, but maybe not in the way that everyone thinks, where everyone kind of just thinks, ‘Oh, he’s doing all of this to put that behind him and get away from it.’ Actually, what it is more (about) is because I played one character for such a long time, and particularly towards the end of that 10‑year period, I started seeing other British actors—Aaron Johnson and Eddie Redmayne and Ben Whishaw—and lots of people I look up to, go off and do loads of different projects and try lots of different things. There’s a little bit of envy, and it sort of builds up inside yourself—that desire to just try as many different things as possible. I guess now that I’m in a position that I can do that, I’m just trying to, while the going is good.”

Asked what makes a good adaptation, in particular, a good American adaptation of a U.K. show, Radcliffe said, “The only show that immediately comes to mind is ‘The Office.’ What’s interesting about that I actually now prefer the American ‘Office’ to the British ‘Office.’ That’s something I never thought I would say. I do think that once they moved beyond the point in the first or second (season), where they were still doing episodes that had sort of been done in the British ‘Office,’ and they were able to establish their own thing, their characters were all developed in different, new and original ways that were entirely of the American series. That’s when it really comes into its own for me and becomes a brilliant, exciting series.”