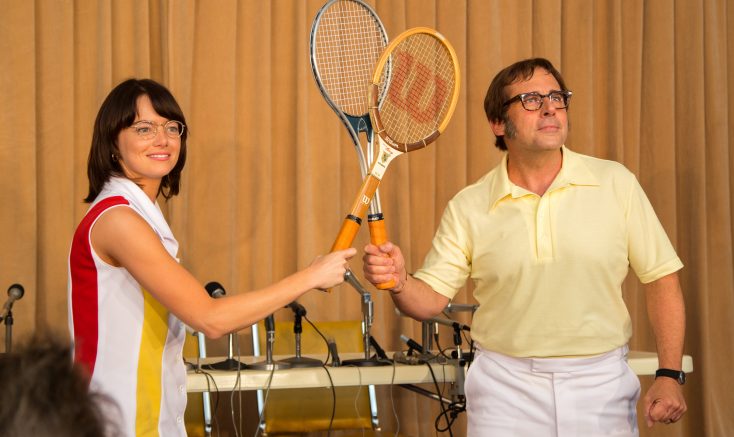 HOLLYWOOD—At 55, Steve Carell is the same age as former tennis champ turned self-promoting and self-described male chauvinist Bobby Riggs. For those who weren’t around in 1973, Riggs, a former tennis champ well past his golden years on the court, challenged 29-year-old women’s tennis champion Billie Jean King to a matchup. Labeled “The Battle of Sexes,” the battle on the tennis court was to determine—according to the hype—whether women were equal to men. Knowing it was an obvious publicity stunt, King, whose professional career was in full swing, was reluctant to accept the challenge. However, she also saw an opportunity to bring attention to the burgeoning Women’s Tennis Association, which arose to gain pay parity with male tennis players.

Carell (“The Office,” “The 40-Year-Old Virgin”) was 11 at the time of the much-hyped sports matchup, and insists he knew that Riggs was just talking a big game to bring attention to the event. Apparently, it worked. More than 90 million TV viewers watched King defeat Riggs 6-4, 6-3, 6-3 in a match that played to a sold-out crowd at Houston’s Astrodome.

The film, expanding to more theaters, reunites Carell with the “Little Miss Sunshine” filmmakers. Researching the character confirmed his suspicions about Riggs—that he was mostly talk and a way to hustle up some money and gain attention.

The Concord, Mass., native, minus the mutton chops and bad dye job that he has in the movie, spoke about tackling the role and portraying this complex man.

Q: Where does Bobby Riggs rank on the “fun to play” scale of the roles you’ve played?

Carrell: He’s up there, because as Jonathan (Dayton, the director) was saying, there’s that public persona, and then there’s this guy that no one really knew. When I started doing research (into the role), there was a great “60 Minutes” interview with him. He’s doing his thing; he’s playing his (male chauvinist) character, this spiel. But the conversation came around to his wife, and talking about how they’ve recently separated. He was saying, “Oh, she’s better off without me,” and “She’s a great woman, the best. But I’m the…”. But there was, even within all of that bravado and that crazy over-the-top nature of his, you could see this pain he was suffering through. To me, that was sort of the root of what I was going for. There was this public thing, but even in his public persona you could see the pain and the sort of the complexity that was lying underneath it all.

Q: With the badly dyed hair and awful haircut you have in this film, are you worried that you are taking a step back on the hotness meter?

Carell: (He laughs.) I read one review of this film that talked about how bad my wig was, and it’s my real hair. I grew out my hair and I grew these massive (sideburns). I actually used the same hair dye he did. Bobby Riggs was such a self-promoter. He wanted to get a deal with Clairol because he always mentioned, “I use Clairol Number 87.” I think he was trying to get Clairol to support or sponsor him. He was always looking for an angle so he used the same color, which was kind of an orangey-brown, and he grew these sideburns, which he didn’t dye. My hair was already brown and then me and my wife and kids went on vacation before we shot (the film) and they didn’t want to be seen with me. I have to say (my Bobby Riggs look) did sort of effect my love life with my wife.

Q: The montage scene where Bobby dresses up like Little Bo Peep and herd sheep on a tennis court as a stunt, what was it like on the set that day?

Carell: There was sheep poop, a lot of sheep poop. It’s one of the things that no one took into consideration before we shot the scene. Between takes, there was somebody—two people, actually—who didn’t know that this was going to be their job at the beginning of the day. So, that is my anecdote.

Q: Bobby’s showmanship is a lot like today’s WWE stars. They talk loud into the microphone in front of the camera in the locker room, or wear costumes in the ring. Can you talk a bit about channeling Bobby Riggs’ showmanship? What were the conversations with Jonathan and Valerie about that?

Carell:  That’s a really accurate comparison. I saw it the same way too. Bobby created a character. He saw what was happening in the zeitgeist and decided to try to profit from it. I don’t think he really cared much about politics. I don’t think he had a foot in feminism or chauvinism; he just wanted to make some dough, and he wanted to promote himself, and he wanted to be famous. I think he had a chip on his shoulder because when he was a star (tennis pro), he didn’t get the money. He didn’t get the acclaim. It was in the late-1940s, and tennis wasn’t a big deal. By (the time of the matchup with King), he was in his mid-50s. He was playing on the senior circuit, and he just wanted to get his due. He also specifically took a page from (boxing legend) Muhammad Ali. It’s the same sort of thing. It’s this bravado and this character, this creation. I maintain that he just wasn’t that good an actor, and that was part of his charm. You could tell that all of these things that he was saying weren’t connected to his heart. That was part of his charm. I was 11 at the time and I knew it was a put-on. Most people I knew knew it was a put on. That was part of what was charming about it. He was benign. You could tell the guys who really were saying these things and meant them, which is not to say that in saying them isn’t dangerous as well, even if you’re just joking around, because other people who do believe that pick up the mantle and run with it. So, there is danger in that. As a person, he was a benign self-promoter.

Q: Who has been your female hero?

Carell: My mom. Someone asked me whether the match affected me in terms of my ideas of feminism and chauvinism when I was 11, and I said I wasn’t really aware of it because of my mom and her relationship with my dad. There was such equity in their relationship. They were equal breadwinners and equal child-raisers. They shared all of the life (responsibilities). My mom was a psychiatric nurse, so definitely her. She was the template for empowerment for me.