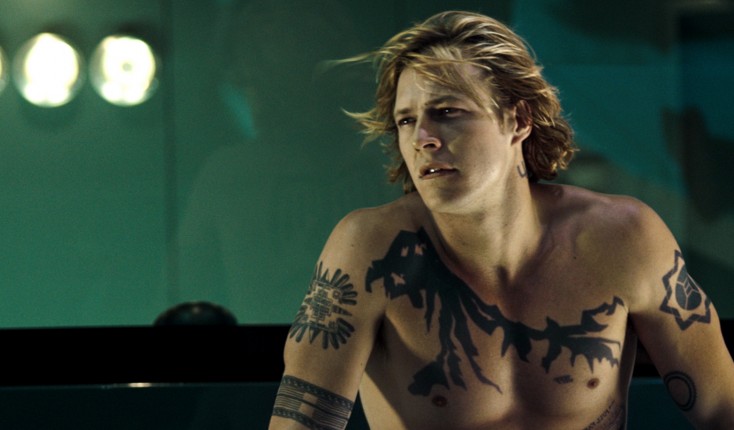 HOLLYWOOD— Australian Luke Bracey and Venezuelan Edgar Ramirez head an international cast about an undercover investigator who enters the daring world of extreme sports in a reimagining of the action-packed drama “Point Break.”

Whereas the 1991 version starring Patrick Swayze and Keanu Reeves involved an agent going undercover exclusively in the competitive surfing world, this “Point Break” has been updated with all forms of extreme sports, including wingsuit flying, sheer-face snowboarding, free rock climbing, high-speed motocross as well as big wave surfing.

Bracey, previously seen in 2014’s “November Man” and “The Best of Me,” plays Johnny Utah, a one-time motocross racer turned FBI agent following a tragedy that forced him to reconsider his lifestyle. He goes undercover to catch a team of thrill-seeking athletes who have carried out a series of crimes in unusual ways. The leader of this group turns out to be Bodhi (Ramirez, “The Liberator,” “Deliver Us From Evil”), who is trying to achieve a set of goals that his pseudo-spiritual hero failed to do. Bodhi is a nonconformist who doesn’t accept what society tells him and he is compelled to finish eight feats, no matter what the cost. As Utah becomes more entrenched in Bodhi’s world, the more challenging—personally and professionally—it is for him to collar this outdoorsman scofflaw and his gang of super-athletic criminals.

Veteran lensman Ericson Core directed the film, based on a script written by Kurt Wimmer. Core also served as director of photography on the film, which is chock full of daring athletic stunts performed by the experts in each of their respective fields. Among the renowned extreme athletes who either performed stunts or served as stunt coordinators and technical advisers on the production include pro surfers Laird Hamilton, Sebastian Zietz and Makua Rothman; snowboarders Xavier De Le Rue, Iouri Podladtchikov and Lucas DeBari; skateboarders Bob Burnquist and Eric Koston; motorcyclists Riley Harper and Oakley Lehman and wingsuit stunt pilots Jon Devore, Julian Boulle, Noah Bahnson, Jhonathan Florez; and free climber Chris Sharma.

With all that macho adrenaline flowing throughout the multi-location shoot, Bracey and Ramirez did as much own stunt work as was safely allowed, including standing atop skyscraping Angel Falls in Venezuela.

Q: Can you talk about your characters and how much the original performances by Keanu Reeves and Patrick Swayze affected your performance? Also why did you want to do with this movie?

Bracey: Along with Edgar, I am a huge fan of the original “Point Break.” Growing up on Sydney’s northern beaches as a surfer, “Point Break” was your whole life in the ‘90s. It was a movie my friends and I watched on almost a weekly basis. We would watch it to psych ourselves up, as we were about to go surfing. We would get about 10 minutes in and then say, “All right, let’s go surfing!” It just gives you that vibe. The original movie is such an inspiration. I think it’s something that really colors this film.

Talking of what Keanu and Patrick did, I just say it is the heart and soul of it. We are making a different film, but with that essence—with that heart, that drive, that ideal that life is about living and that you should go out and get it. Rather than hanging over us, I thought (the original film) helped us and inspired us and gave us the direction we needed to go.

Edgar and I could then make our Utah and Bodhi characters unique, but still have that bare bones and that backbone that the original did, but to go on from there, and to make something new and something for 2015 and 2016, rather than 1991, I think it helped. Being a fan, I gave this film everything I got because I love it so much.

Ramirez: Unlike Luke, I didn’t grow up surfing or living by the ocean. So, for me, it was a totally new and exciting experience to get into. To get a taste of what surfing is and the rest of the sports that we were allowed to practice. There was no way to even get a taste of proximity flying, unless you are willing to die, and that’s not the case. One of the things I learned is that there is no wave identical to the next. That happens only once, and if you catch that wave and if you ride that wave, it’s a moment that will happen only once in your life and you hold on to that memory and that’s it. That is the same thing that happens with our characters.

What Keanu and Patrick did was unique and beautiful. It’s not susceptible to be recreated. We tried to capture the essence of the tale. We could speak for hours about what “Point Break” is metaphorically, and about the difference between the world nearly 25 years ago and the world today. The promise of accumulation, being successful financially and accumulating material goods was a promise that has been broken. Our movie pretty much recreates the broken dream and the broken promise of capitalism and trickle-down theories saving us. I don’t want to get too intense or deep into that.

Keanu and Patrick really portrayed their characters amazingly and just served as a great inspiration for us in that whatever you do in life, do it with passion, and do it to the fullest. You don’t have to put on a black wingsuit and try proximity fly above the earth. You don’t have to get on a surfboard and go and try to ride the highest and tallest wave. You just have to commit to what you love in life, whatever that is. It doesn’t have to be extravagant or spectacular. You just live life to the fullest and with the most extreme passion that you can possibly achieve.

Q: What was the most challenging part of the film?

Bracey: The physical aspect of this movie is something that really drew me to it. I grew up surfing, snowboarding, skateboarding—doing all of these things. It’s something that’s very close to me. So I really wanted to do everything I could until the pros took over, until the real guys got to do what they do best. For me, that was exciting.

The (MMA) fight scene that we had was really fun. We wanted it to look as unpolished as possible. You see some fight scenes in movies that are pretty choreographed. We wanted it to be look down and dirty. There are a few elbows and head butts, and knees to below the belt. We rehearsed for maybe three weeks so we could get it as intense and real as possible.

Being able to get to these places where they perform these stunts was great too. To hang off Angel Falls—a kilometer above the earth—that’s stuff you can’t buy when it’s on a green screen. That said, you’re all tied in and it’s all safe, but there’s still a part of your brain saying to you, “What are you doing, man? You’re mother is going to kill you.” (He laughs.)

Ramirez: If you don’t get killed first.

Bracey: The whole physical aspect was another side of it that just added to the experience for me. Maybe the hardest thing was the schedule and keeping my energy up for six months of principal photography. Sometimes we were 1,200 feet above sea level and sometimes we were 30 feet below, and in all of these different environments. So the hardest thing for me was maintaining myself and making sure I was fit and healthy, that I had all the energy I needed and, mentally, I was all right for those six months. I’m really proud of how I managed that.

Q: Edgar, what was your toughest scene? Do you have any phobias?

Ramirez: The whole movie was tough. To have access to those locations was a challenge for everyone—the makeup and hair department, everyone. We all have to be clipped up all the time. We all have to be very careful in following security protocols because we shot on top of Angel Falls and we shot on top of the Mont Blanc (Switzerland), the highest peek in Europe. We shot under waterfalls and constant rain, where the temperature would be super high. If you were under the sun, the difference in the degrees would be 20 from shadow and from sun. When we were in the Bocas Del Dragon in Venezuela shooting the beginning of the climb toward the top of Angel Falls, it was like shooting in the shower for everyone. It was a tough fun.

We took all of the precautions, so we felt very safe. But you had to be really on top of your game to shoot this film. Luke and I hung off the highest waterfall in the world. We were both hypnotized and psyched into it. It was a very revealing experience. I thought I wasn’t afraid of heights until then.

Q: What was the toughest scene to film?

Bracey: Yeah, when you have been to these places and then suddenly you’ve got two weeks in Babelsberg, Germany, it’s tough.

Q: How did you build your bromance?

Bracey: The first day in Germany we sat down, Ericson (Core, the director), Edgar and I and had dinner at The Mandala, the hotel we were staying at. It was quite obvious from the first minute of conversation how committed we all were to this—to the characters, to the story and to the movie as a whole. The commitment was mutual between Ericson and the rest of the crew. The bromance was hardly something we had to work at. We didn’t have to play icebreakers. We were all wholly committed to the idea of the movie and everything involved.

In acting, you are looking at someone eyes and seeing if they are telling the truth for a lot of the day. Sitting down for that first dinner with Ericson and Edgar, we all looked at each other’s eyes and knew we were right for this. That kind of commitment and trust is what friendships and relationships are built on, either romantic or bromantic. For me, we didn’t have to work on it. It was there from the get go.

Ramirez: It’s true. Ericson is a pivotal part of this relationship. There is a lot of Utah and Bodhi in Ericson as a person because of his personal connection to nature with the Earth is real. It’s part of his history as a man, as an anthropologist. He makes movies, but that’s his background. He really knows nature and has a very close interaction with it. I think that this was something that was a collaboration between the three of us to get these characters and to build this relationship and to ride this wave together. He is really the captain of this ship. He always kept his cool. You have no idea how difficult this movie was to shoot. I can only imagine, the level of patience, the exercise of contemplation that Ericson had throughout this. I’m talking about being four or five days on top of Angel Falls. It was one of the most difficult operations of the entire film because it’s so far away and Venezuela is very complicated. It was one of the most remote locations in the film.