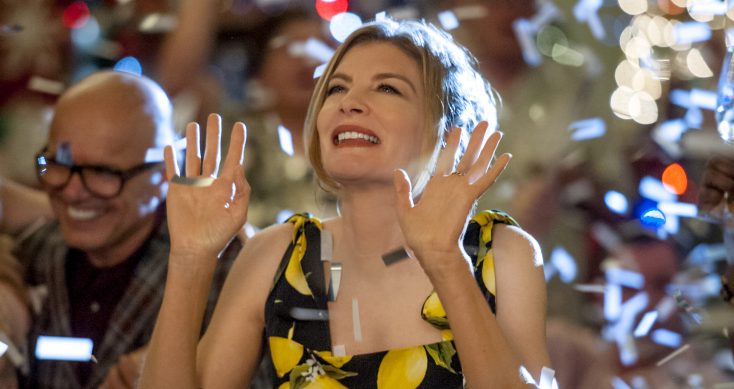 The actress now co-stars opposite Oscar winners Morgan Freeman and Tommy Lee Jones in the comedy “Just Getting Started.”  Russo previously co-starred with Freeman in 1995’s “Outbreak,” although the two shared no scenes in that medical disaster thriller. This time around, Russo not only shares multiple scenes with the Hollywood heavyweight, she also goes toe-to-toe with him on a comedic level.

Russo plays Suzie, a corporate efficiency executive who arrives at the luxury Palms Springs resort Villa Capri, managed by Freeman’s freewheeling ladies’ man Duke Diver, who also has a mysterious past. Arriving at the desert getaway around the same time is ex-military charmer Leo (Jones), who challenges Duke for the top Alpha male spot. The two men vie for Suzie’s affections with various challenges, from ping pong to chess to golf. Suzie goes over Duke’s books and discovers that the numbers don’t add up. She is torn between reporting Duke’s excesses to her bosses and her deepening fondness for him, Leo and the whole Villa Capri operation.  Meanwhile, Duke’s murky past is beginning to catch up with him, and someone is trying to kill him. That’s when he and Leo set aside their differences and try to identify the possible assassin before he gets to Duke, with Suzie and her precious Yorkie, Romeo, along for the ride.

The native Angeleno (she was born and raised in suburban Burbank), Russo spoke about working with the two Hollywood icons, playing Suzie and what’s ahead. A devoted mom to daughter Rose, Russo is married to filmmaker Dan Gilroy, who directed her in the highly acclaimed 2015 thriller “Nightcrawler.” He’s also cooking up another feature in which she is slated to star next year.

Q: “Just Getting Started” is a simple, lighthearted comedy. Do you feel audiences really want an escapist film like this?

Russo: Oh yeah. We just need something. We are in a drama. Oh, are we in a time. I agree. I only want to see comedies right now.

Q: You’re working again with writer/director Ron Shelton and Morgan Freeman again in this. It must have felt like a high school reunion?

Russo: It was. When Ron told me he had a script and wanted to know if I might be interested in it, my answer was a resounding “yes.” I didn’t need to know who else was in it or even need to read it. I knew it was Ron. I know how he writes for women. So, I was like, “Yes, I’m in.” Then he sent me the script and told me that we were going to shoot it in the (New Mexico) desert in August. And I was like, “Please tell me no, Ron,” because, honestly, I have no interior cooling system and I won’t make it. I really will faint. I told him I can’t work outside and I didn’t want to hold him up on set. I do have a problem in the heat, and as I get older, it’s gotten worse.

Q: And you have the high altitude of New Mexico.

Russo: Horrible, the elevation. Luckily, the schedule was pushed back a bit.  He told me he’d get me a truck, and I said, “You’ll have to get me an ice cream truck.” He said, “We’ll do it. You’ll be fine. I’ll make it work.” And, as it turned out, it was an unusually cool month, and I lucked out. But I’d work anywhere with Ron. He writes women beautifully. He understands women. He likes women, even though he’s kind of a guy’s guy. He’s kind of like Tommy Lee Jones and Morgan Freeman mixed together. Lolita, his wife, is wonderful. Lolita and I are a little bit alike. (She chuckles.) So, I love him. I love his writing, and I was very excited to get a chance to work with him again.

Q: Which character in this film did you most identify with?

Russo: I identified with Suzie because I get her. Trouble follows her. She’s hanging on by a threat, in terms of her job. She was sent to the resort to investigate some unsavory business practices. And she has to really stay on it. She’s going to lose her job at any moment. So, that was kind of a fun character to play. She’s trying not to let these guys affect her in any way, but you know she’s being affected. I relate to her because she doesn’t totally have it together. (She laughs.) I think some women are more capable than others but, for me, I get the job done but it’s like, “How did I do it?”

Q: Can you also relate to the title, “Just Getting Started?”

Russo: Yeah, like I said, with acting, sure, I’ve been there, done that in a way, unless it’s really good, and it’s Ron, and it’s a comedy, and it’s fun. There’s that. But as you get older, it is time to think about other things you’d like to do because you have done so much. If you’ve had a family, you’ve most likely raised it. Once you do that, you think, “OK, now I can spend some time with me.” I think it’s a good time to start new things.

Q: You’ve got a co-star in this whom I’ve heard could be a little temperamental and wanted the biggest trailer—so, how was Romeo?

Russo: (laughing) Romeo was cool. He was a good boy. Actually, we had two (dogs) but he was, for the most part, really good. That poor thing had to wear the cone, while sitting on my lap in that truck, but he was great. I was a little worried, at first. But I was really surprised and happy how those scenes (with the dog) turned out. He was a real sweetheart.

Q: Do you prefer lap dogs to bigger dogs?

Russo: I used to like (bigger dogs) and vowed that I’d never own a small dog. Ever. And then I found a rescue on the street. She was nursing, you could tell. I love her so much. And you don’t realize, you can pick up a little dog. She’s like the perfect baby-size. So, now I love small dogs and I don’t know if I’d go back (to bigger dogs).

Q: What was it like working with Morgan Freeman?

Russo: It was the two of them together (Freeman and Jones) that was intimidating. You walk in a room and you’re like, “There’s Morgan Freeman and there’s Tommy Lee Jones. Holy hell!” These are kings in our industry. It was like walking into a room with not just one king, but two. And I thought, “Rene, you’ve got to focus. You’ve got to really be on your game here, because they’re so on their game.”

On the first day of rehearsal, they put blue tape on the floor (to indicate the marks), and I couldn’t focus on that the tape meant. The second time I missed it completely. And after a few times, Morgan said, “Woman, look at the floor!” And, without missing a beat, I said, “Morgan, it looks like blue lines. This is why I dropped out of high school. It’s like a math equation to me.” And then I saw a small smile on Morgan’s face. At the end, he told me, “You’re nearly incorrigible.”

Q: How was Tommy Lee Jones?

Russo: He’s the most interesting, complex person I’ve ever met. He’s bad*** Tommy Lee Jones, and yet he’s so sensitive. At least, that’s how I see him. Working with him and spending the amount of time that I did with him, I saw that he has a really soft heart.

Q: You’ve worked with these guy’s guys before—Mel Gibson, Danny Glover, Nicolas Cage. Is it just a different situation each time you work with one of them?

Russo: You just have to be real. I’m always interested in people. I can pretty much blather on with anyone. Not too many people intimidate me. (Jones and Freeman) kind of did. I realized, acting-wise, I had to be on my game. You have to know when to talk to a person and when not to because sometimes they don’t want to talk before a scene. Mel Gibson used to have a burping contest before a dramatic scene, so you kind of have to read (the circumstances) and see who they are and just be aware of their space.

Q: When you were promoting “Nightcrawler” a couple of years ago, you seemed a little ambivalent about acting again. What changed your mind?

Russo: Well, Ron came. So, if it’s good and I think it’s going to be fun and it’s Ron, who makes it fun and easy, then I’m game. It’s not like pulling teeth. Even though I kind of did this character in “Tin Cup,” it’s still great. Working with (Tommy Lee Jones and Morgan Freeman) was amazing. So, that would be something getting out of bed for.

Q: Speaking of whom you’d want to get out of bed for, in this film, Morgan’s character surprises you by having legendary singer Johnny Mathis sing to you. Whom would you like to see in a surprise concert arranged just for you?

Russo: I’m a huge Stevie Nicks fan. But I’ll tell you, if my daughter was with me, I’d take Taylor Swift. C’mon. I’m a pop girl. I’m from the (era of) The Monkees. I look at Taylor Swift and think, “Oh my God, she’s just written her 80th hit song!” Being with my daughter, Rosie, it would be so much fun to watch her. But, from way back, I’ve been a huge fan of Stevie Nicks. I’d love to hear her. So, Stevie would be my first choice.

Q: What are you working on next? Is there something you’d like to do that doesn’t involve acting, like sailing around the world?

Russo: I don’t think I’d like to sail around the world because I’m not a swimmer but my husband has written a script for a film that we’re going to start (shooting) in March. It’s a movie set in the contemporary art world. I’m looking forward to that because it’s a good part; I’m lucky to have it. He’s my husband. He wrote it. Who else is he going to hire? If I’m living with him in the house, he’d better hire me. (She laughs.) So, that should be fun. It’s untitled. He doesn’t have a title yet. That’s always the hardest thing.

Q: Where are you filming?

Russo: Here in Los Angeles. Other than that, I just want to work in my garden. I’m a native California girl.

Q: It could be because of some of the characters you’ve played.

Russo: That’s true. They see me on the screen as that character.

Russo: There you go. That makes sense.c