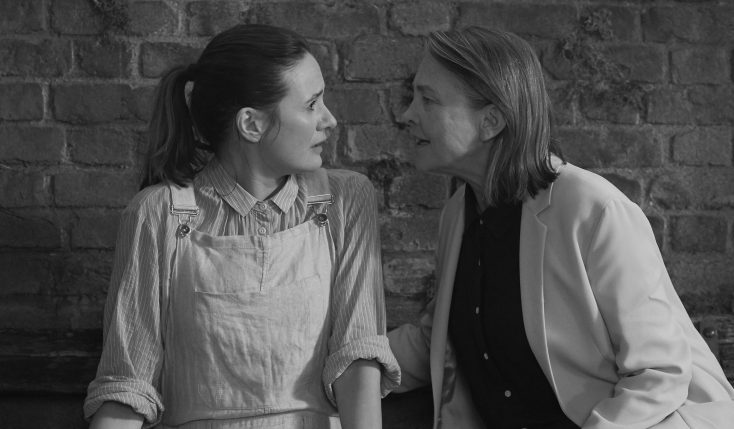 The cast of THE PARTY. ©Roadside Attractions.

HOLLYWOOD—In the upcoming “Mary Poppins Returns,” the long-anticipated sequel to the hit 1964 Disney musical, Emily Mortimer plays an all-grown-up Jane Banks. The Rob Marshall-directed sequel, which also stars Emily Blunt, Meryl Streep and Dick Van Dyke is set to drop in to theaters this Christmas. Mortimer calls the experience of performing in her second big screen musical “amazing” and something she is deeply proud.

Her first big screen musical was Kenneth Branagh’s ambitious but ill-fated Shakespeare adaptation “Love’s Labour’s Lost” in 2000. Although the film was a critical and box office disappointment, it proved fortuitous for Mortimer who met her future husband, actor Alessandro Nivola, there. The couple, who have two children together, will premiere “To Dust,” their first film through their King Bee production company at the Tribeca Film Festival this spring. Also this spring, the actress stars in the big screen adaptation of Penelope Fitzgerald’s novel “The Bookshop,” playing a shopkeeper whose lofty dreams are ultimately dashed.

Mortimer fans don’t have to wait, though as the wholesome star of “Lovely & Amazing” appears in Sally Potter’s pitch dark comedy, “The Party,” a chamber piece involving a gathering of friends. Mortimer stars alongside Kristin Scott Thomas, Timothy Spall, Patricia Clarkson, Cillian Murphy, Cherry Jones and Bruno Ganz, playing Jinny, a young ultra-feminist whose relationship with her much older girlfriend (Jones) is tested when she delivers some big news. The friends have gathered at Janet’s (Scott Thomas) swanky London townhome to celebrate her victorious election to a high government post but the atmosphere changes from joyful to toxic within minutes of the arrival of the guests, as secrets spill, old wounds reopen and a loaded gun is present. Jinny’s announcement that she is pregnant with triplets (via artificial insemination) triggers a less than enthusiastic response from her lover creating further tension. Shot amidst Britain’s Brexit turmoil, the film is infused with political and social themes. “The Party” opens in theaters Friday, Feb. 16.

Mortimer explains during a phone interview that she welcomed the opportunity to work with the renowned filmmaker, who previously had directed her husband in 2012’s “Ginger & Rosa.” Potter’s original screenplay also appealed to her as did the idea of filming in black and white on just a few sets in under two weeks.

Q: Did you know Sally Potter prior to signing on?

Mortimer: Yes, I’d known her for a few years because she worked with my husband on a film called “Ginger & Rosa.” We hung out then and she became a fan of “The Newsroom.” She was very complimentary and sweet about that. And then she sent me “The Party” script, and I thought it was so original, cool and right for this moment. It felt like medicine, in a way, this satire. I thought it was hilarious and really radical in an understated way. So, I met with her and she told me how she wanted to film it, which was set for 12 days, in a studio and in black and white. The cast was incredible and it just felt exciting and something I’d want to be part of.

Q: Was your character Jinny expecting triplets from the original script or did that plot evolve?

Mortimer: She always was pregnant with triplets.

Q: Having gone through two pregnancies in real life, could you relate to Jinny’s emotional reaction to Martha’s ambivalence to the news?

Mortimer: Yeah, I could totally relate especially to the feelings of confusion. Your hormones are raging and you’re longing to be looked after but the other person doesn’t quite know what to do because there’s nothing they can do in that early stage. You don’t even know what to expect from them apart from utter adoration and devotion. You feel quite strange and animalistic, in a way, and that’s drawn on in the movie. I arrive at this party with all these intellectuals who are talking about politics and I’m just sort of disgusted by them all because all I’m thinking about is these babies and why my girlfriend isn’t paying me enough attention. So, all of it felt recognizable and easy to play for that reason.

Q: There is a lot of undercurrent about conservative and liberal politics in this. What did you think of the issues raised?

Mortimer: What I love about the movie is Sally’s created these characters who have these political beliefs but it’s pointing out that our politics, like everything else in our lives, is just completely subjective. It has to do with how we were brought up and the culture we find ourselves in, and it’s just as subjective as who we love or what taste we have in food or music or politics. The comment being made is an important one right now because people are so sure about what they think and they’re so sure they’re right, it’s kind of scary—that sanctimony that’s going on at the moment. Here’s a film that’s sort of satirizing that political sanctimony and saying people’s politics is completely subjective and actually we’re just creatures of our own desires and passions and craziness and our politics beliefs are just as subjective as any of our other beliefs.

Q: Did you rehearse a lot before the cameras rolled?

Mortimer: We read it through and talked about it all together for a couple of days and then we rehearsed individual scenes with our fellow castmates. So, I did a lot of work with Cherry, Cillian and on my own with Sally. The first few days we were together, though, reading the script, talking, getting to know each other and becoming this group of friends.

Q: Did she seek input from you on the character? Did you improvise much?

Mortimer: We had several conversations way before met to make the movie by phone and Skype about the character, getting the tone and style and her motivation. But I don’t remember changing many lines. There was something quite theatrical about the way the piece was written. It’s sort of heightened and almost like a farce. The writing was very specific, and there was a rhythm and style to the language that one has to honor. It didn’t seem like something that was easy to extemporize and so we really didn’t change much of the dialogue. Maybe an odd line here or there, just to make things work better.

But she is very open and very collaborative and wanting to discuss it. It was really a luxury in how much she wanted to talk about it. Most film directors, you’re lucky if you have a single conversation with them. She’s still a real radical with the way she shot it for that very short amount of time, and making it in black and white. It all felt exciting and fun. It was like an adventure and I was so thrilled to be part of it at every stage.

Mortimer: (laughs) I never like the way I look whether it’s black and white or color. It’s so hard to look at one’s self onscreen, but I think black and white was exactly the right choice for this movie. There’s something of a “Who’s Afraid of Virginia Woolf” quality to the style of it and the people she’s portraying. It gave it a particular feel that’s right for the piece.

There are moments in the movie where we’re lit in a way that’s very beautiful and there are other moments where there are no punches spared, where we’re harshly lit, which is quite bracing when it’s your face up there (on the screen). But I think it’s entirely right for the film. There are moments of beauty where it feels larger than life and moments where you think you’re really seeing into people’s souls, and the dark, dirty underbelly of life. You see everybody’s wrinkles and bags under their eyes because of the harsh lighting. Alexsei Rodionov is an amazing cinematographer. He did “Orlando” with Sally all those years ago (1992).

Q: Have you ever been to a party where things got a little out of hand as this one does?

Mortimer: I’ve been to a lot of rowdy parties in my life. My own wedding was quite out of control. One of our guests wee’d her knickers three times, she got so drunk. (laughing) We thought that was the sign of a good party.

Q: You’ve got “Mary Poppins Returns” coming up. How was it getting a chance to sing again?

Mortimer: I am not, as my family will attest, a born singer. There are two things I’m terrified of: heights and singing, and I had to be up on a very high crane while singing. So, the combination of the two (fears) was almost paralyzing. But, I did it. As the musical director said to me at one point, “I could make a banana sing.” I was lucky to be in the hands of professionals who were able to make me sound presentable. I loved the experience and I feel excited to be part of it because I believe Rob Marshall has done (the material) proud. It was really in the right hands, that movie.

Q: What can you say about “The Bookshop?”

Mortimer: That’s supposed to come out in the next few months in America and in March in England. It won a lot of Goya awards in Spain. It’s based on the Penelope Fitzgerald novel about a woman who opens a bookshop. It’s sort of the reverse of the American Dream story—you can try and try and try at something and still fail.

Q: You’re now adding producer to your credits with your King Bee production company that you started with your husband.

Mortimer: Yeah, we have a first look deal with eOne to develop TV programs. So, we’ve been doing a lot of producing. We have a movie premiering at the Tribeca Film Festival in April called “To Dust,” with Matthew Broderick and Geza Rohrig who starred in “Son of Saul,” the Hungarian film that won the Best Foreign Language film in 2016. It’s a beautiful movie about death but it’s also very funny and odd, and you should look out for it.