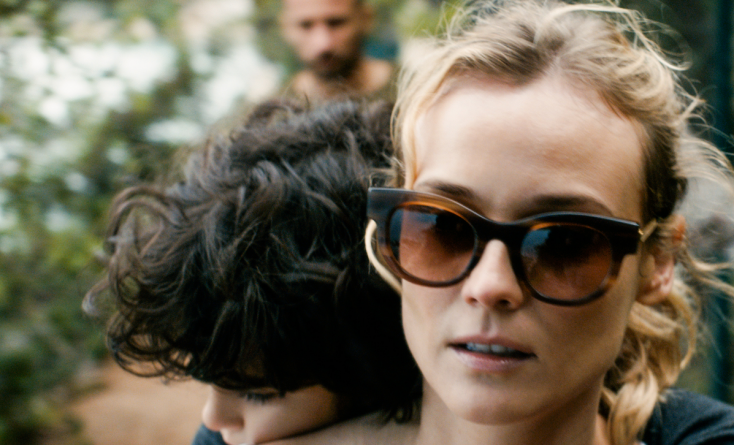 For two seasons, she played Sonya Cross, a Texas border-town police detective with Asperger’s syndrome, on the FX series “The Bridge.” The TV drama was a bit ahead of its time, delving into the current hot-button issue of undocumented immigration, a key subject in the American Presidential election as well as in Europe.

In “Disorder,” the 40-year-old blond stars opposite Belgian actor Matthias Schoenaerts, who plays a French soldier on leave from active duty in Afghanistan. While he awaits his next deployment, Vincent picks up work as a security guard at a posh party hosted by a wealthy businessman. It turns out the businessman has ties to some unscrupulous individuals. Asked to stay on at the luxurious gated estate in the South of France to guard the man’s wife and young son (Zaid Errougui-Demonsant) from possible kidnappers or assailants, Vincent agrees. Suffering from PTSD, the warrior has to fight his inner demons and the paranoia that comes with his medical condition. Kruger plays the elegant wife of the businessman, who remains enigmatic throughout much of the film. Vincent (and the audience) doesn’t even find out her name until an hour into the film.

To Jessie, Vincent is just another member of the household staff. She summons him to take her and her son to the beach where they have little interaction. She begins to suspect his condition as the days go by and it appears that the businessman may not be returning home soon. French writer-director Alice Winocour, who wrote and directed the critically acclaimed “Augustine,” and won a Cesar award for co-writing “Mustang,” leaves it up to the audience to determine whether Jessie and her son are in danger or whether Vincent is simply imagining it.

Just before the film’s New York premiere, Kruger spoke about taking on the role, working with Winocour and starring in her first German-language film.

Q: How did you get involved with “Disorder?”

Kruger: They came to me. I was really looking for another French project. I’d been away shooting “The Bridge” for two years and I hadn’t made a French picture in two years. I loved Alice’s first film, “Augustine.” I think she’s a really interesting young filmmaker. I’m always looking for auteurs. She has a way of conveying a situation and an emotion with little or few words. It’s definitely a French movie. Even with “Augustine,” you can see how her camera conveys her ideas. She’s a real director. I also thought it was interesting for a woman to direct this genre. I was a huge fan of Matthias from the time (his breakthrough film) “Bullhead” came out.

I thought his character was interesting; it had a big arc to it from the beginning. There were a lot of things I felt were compelling about this project.

Q: Your character’s name isn’t mentioned until an hour into the movie. You’re a mysterious woman. Was that fun to play?

Kruger: I thought it was interesting because it was a woman director helming this. I don’t know how comfortable I would have been to play this sort of trophy wife character through a man’s point of view. I feel like the distance she looks at me with is so intriguing but it’s not just a physical distance. I can tell from the beginning that there’s more to that character. I love the way that character’s mysteriousness evolves into such an emotional and vulnerable state. That’s where Alice’s talent as a director is really poignant.

Q: I got the feeling that what Jessie is telling Vincent about herself isn’t necessarily the truth or the complete truth.

Kruger: Yeah. And I love that there’s no real love story. There is a love story there but it’s not blatantly put out there; there’s a subtleness to everything.

Q: You also work with this young actor who plays your son in this. Was it fun to work with a child and play a mom?

Kruger: It’s always very difficult to make films with children. This boy, who was adorable, had never acted before. Alice found him literally coming out of a class. But he thought it was fun to do make-believe for about a week but for the rest of the three months, he wasn’t all that interested. So it takes a lot of convincing and kindness and maneuvering. It’s kind of unfair because no matter what they do, they will always be better than you in a scene, because they’re so natural. Once they get into it, they get into it. He was so cute.

Q: The title in France is “Maryland,” and here it’s “Disorder,” which has a double meaning about what’s going on in the house as well as what’s happening in Vincent’s head. Do you prefer one more than the other?

Kruger: Yeah. It took a long time to find that title. Even while we were shooting it, they were talking about what they would call it here (in the U.S.) The double meaning is great and I’ve been very happy with the response. I wasn’t sure that it was going to connect with North American, English speakers but with the premiere in Cannes and in Toronto (at the Toronto International Film Festival) and in Britain, it’s had a really great response. I’m surprised at how much people have responded to it.

Q: Like “The Bridge,” which examined illegal immigration in the U.S., and this film examines the subjects of paranoia and PTSD, so can you talk about it’s relevance in today’s social and political climate?

Kruger: We shot this about a year and a half ago. But we were talking about it yesterday about how eerily accurate and current it is in France.

I was shooting another movie in the South of France when the Nice attack happened. It was really close by. It was the first time I ever felt we could have very easily been there and having a cocktail when the explosion happened. It’s so crazy.

Q: Are you looking for projects that are relevant and reflect what is happening in society today?

Kruger: I don’t know if I consciously look for that but when I read scripts they have to move me in a way or feel like I am with that person in whatever struggle or whatever story is happening that I can put myself in. These are projects that I have been concerned with and I find as a person interesting and current. But I’d also like to do a comedy. It would be nice to do a smart and clever comedy. That hasn’t happened yet, though.

Q: What were you shooting in France?

Kruger: It’s a thriller (“Tout nous separe”). Catherine Deneuve plays my mom. It’s kind of a mother-daughter story where she causes an accident that I was in and ruined my leg so we’re forced to live together and we have a difficult relationship, and I get addicted to painkillers. I wrapped a week ago.

Q: You received a lot of acclaim as Sonya on “The Bridge.” Are you looking for more TV projects? Do you want to focus on films?

Kruger: I would love to do another show. It would have to be the right one because obviously it’s a big commitment. But I had a really great time doing “The Bridge.” Also, I’m not at the age where I’m going to make “Spider-man 1-10.” Especially for women, there is so much more to do (on TV). I prefer watching shows at home. I like that you can watch them when you want. Plus, they’re so smart and they’re so well directed too. A lot of great film directors are drawn to television as well.

Q: Being multilingual, you have a lot of options. You can make a French film, then come here and make a Hollywood movie.

Kruger: Mostly in the U.S., between New York and L.A., and I still keep a place in Paris.

Q: Do you ever do any German films?

Kruger: Not yet. I’m going to do my very first (German) film this year, which I’ve been waiting to do for a long time. It’s with one of my favorite filmmakers, Fatih Akin. He won two big awards at Cannes for “Head On.” He won the Golden Bear. He’s a very controversial and political filmmaker in Germany. He’s of Turkish descent and his best films are always about the Turkish-German racism. I’m going to start that in October.

Kruger: “Into the Fade.” It’s a political thriller based on true events.