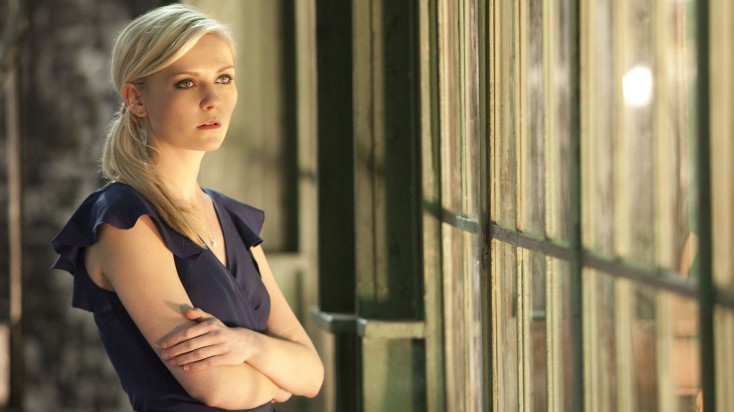 Jim Sturgess as “Adam” and Kirsten Dunst as “Eden” in “UPSIDE DOWN.” ©Millennium Entertainment.

HOLLYWOOD—Kirsten Dunst made cinematic history by planting an upside down smooch on on co-star Tobey Maguire in his superhero costume in “Spider-Man.” The 30-year-old actress once again goes head-over-heels for her onscreen beau in “Upside Down.” In fact, she spends most of the movie topsy-turvy in this sci-fi fantasy about two star-crossed lovers, written and directed by Argentine filmmaker Juan Solanas.

Dunst plays a woman who lives in a world that abuts another world. These twin planets have opposite gravities that not only separate the inhabitants, the affluent Up Tops and the impoverished Down Belows, but they are kept apart by a strict political and social system that keeps them apart. That doesn’t stop a curious young Adam (a Down Below) from venturing to a high mountaintop and meeting a pretty blond wandering alone near the peak of the other world. Naturally, they are attracted to one another but their brief courtship is interrupted by interplanetary border-patrol agents who attack them. When Eden falls back to her world, Adam presumes she has died.

Years later, Adam (Jim Sturgess) learns that Eden (Kirsten Dunst) is alive and working at TransWorld—a vast corporation whose towering headquarters is the only structure that connects the planets. In a desperate attempt to find her, Adam gets a job at the company and sets about infiltrating the upper-world executive suites to find Eden.

The 30-year-old recently spoke about alternate universe romantic drama, kissing upside down and her fondness for felines.

Q: You’ve made a lot of interesting career choices lately with roles in offbeat films like “Melancholia,” “On the Road” and now this. Do you feel you’ve gravitated towards the unusual?

Dunst: For me, I gravitate towards the director. Always. Usually, I’d rather do a script that I find—and I’m not talking about this film, but in general—that maybe is not amazing, but I’d rather work with a great director than on something that has an amazing script and a director who I think is mediocre. That’s because I think it’s really all up to the director (to make a good film). They’re the orchestrators of the entire process. With Juan (Solanas), he is such a visionary director and I loved his short films so much, I knew the story would be important but the visuals also would be so magnificent. It was a concept that I’ve never heard of before. It was incredible.

Q: Could you imagine how this film would look when you signed on?

Dunst: I honestly didn’t know exactly what it would look like but Juan showed Jim and me mock ups and pictures of things. It’s interesting because it felt real. It wasn’t too sci-fi or anything like that. It felt grounded in reality, which is so beautiful and something that I’d never seen before.

Q: Was it weird having an upside down kiss again in a movie? And was it in the script or did it come up spontaneously during shooting?

Dunst: I definitely think I stood on a ladder once and Jim and I were yelling back and forth. I remember doing that. Physically, I wasn’t really put through the ringer on this like Jim was. I had to learn the tango, which was fun. I had a lot of classes. It was good and really fun for me. Emotionally, the hardest scene to do, emotionally, was thinking Jim had died because we were doing it and I was lying against a green foam mat and there was green screen all around. It was such an emotional moment thinking you’ve lost the love of your life like forever. And there were all these (crew members) around so close. Sometimes that’s how it is making a movie, but the wiring and all the logistics of it and to be emotional over and over again is hard. It’s hard in that kind of situation because it feels so not real. I really had to rely on Jim’s acting to help me, on his face, to help me get those emotions because it can be a numbing process sometimes.

Q: What type of tango dancer are you?

Dunst: I was getting pretty good. I was jumping up. I had a lot of classes.

Q: The tango is like a metaphor for love. Did you get that?

Dunst: For (my character Eden) to go to this club where both worlds are allowed to participate in and the people above are dancing to the same music as the people below, I think she was drawn to that place because of that. It was something that she couldn’t remember but was inside of her. Also, when you feel lost in something like the music of the dance—it’s like her passion or her release, basically.

Q: What stood out to you when you were reading the script?

Dunst: For me, it was like a fairy tale, and I haven’t been a part of something like that (in my career). I thought it was so sweet and so special at the same time. There are little things that felt prevalent to our time but then it’s in this beautiful fairy tale world. Juan was really the person I knew would make a special movie.

Q: Did you connected to the material or was it hard with everything all around you?

Dunst: It was hard because Jim and I have very few scenes to explain the relationship and explain what happens, so sometimes it was hard for me to fill in the dots. So I used facial expressions and maybe one line that would have to mean a lot more. It’s simple but a big and complicated story because (my character has) lost her memory. I had some scenes where I was on wires with him but I didn’t have as complicated a time as he did. Jim got the brunt of all that work.

Q: Has it gotten easier to work with special effects since you’ve worked them on “Spider-Man” and other effects-laden films?

Dunst: It’s not easy. On this one, a lot of the sets were built. It’s just the technicalities that slow things down. That’s why sometimes it’s more exciting when you’re not working with all the special effects because it starts to hinder you more, and depending on how uncomfortable it feels. There’s a lot more little annoying things to get over to make the scene feel real, but then you just go for it even though you’re in pain and you’ve been in a harness all day. The most important thing is the story and no one knows watching the movie how you felt for real.

Dunst: I did a movie recently called “The Two Faces of January,” with Viggo Mortensen. It’s based on a Patricia Highsmith novel, and it’s kind of a thriller set in Greece.

Q: Where did you work in Greece?

Dunst: On Crete. It was really amazing. We also shot in Istanbul (Turkey) and we shot in rainy old London.

Q: Did you get a chance to go to any of the other Greek islands?

Dunst: We just went to Crete and then we had to work in Athens for a week after that, but it was amazing. I love cats and they’re everywhere. I would just go to a store and sit there and feed them. I’m a cat lady and proud of it.