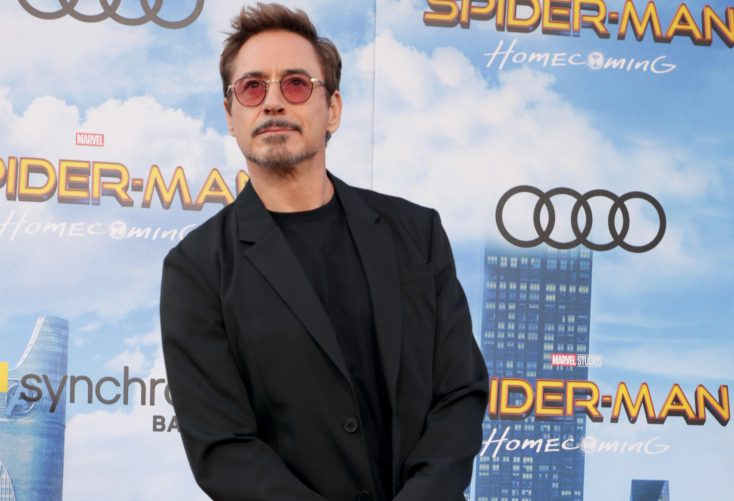 NEW YORK—In “Spider-Man: Homecoming,” Robert Downey Jr., reprises his role as Tony Stark/Iron Man for the seventh time (eighth, if you include his cameo in 2008’s “Incredible Hulk”).

The two-time Oscar nominee, who began playing the billionaire/superhero in 2008’s “Iron Man,” spoke at a press conference about reprising the iconic character and playing the onscreen mentor to the youngest superhero in the Marvel Cinematic Universe, played by British actor Tom Holland.

As Tony Stark/Iron Man, he takes Peter Parker/Spider-Man (Holland) under his wing, teaching him the ropes about fighting supervillains, all the while protecting him from harm. The film is directed by Jon Watts, who co-wrote the action-packed film with five other writers.

The always witty Downey spoke about why he enjoys returning to the heroic Marvel character, working with his co-stars and whether there is more Iron Man in his future.

Q: How do you feel about the way the Marvel Cinematic Universe has not only evolved but expanded to now include the likes of Spider-Man, since it started with “Iron Man” in 2008?

Downey: Amy (Pascal, producer) and them had done these iterations of “Spider-Man” previously. They really should do one of those break down, kind of boring-to-read but somewhat important books about all the miracles that had to happen for us to be sitting here today. I just feel like, “Hey, we’re in a classy hotel and people are clapping and this turned out so well, though.” It really always comes down to, as Kevin (Feige, producer) says, “You’ve got to see the movie and love it.” I was in it a little bit, and I saw it, and I honestly loved it. What’s exciting is (the MCU movies are) still really working, thanks to all these folks (indicating the filmmakers and cast).

Q: What do you think of the finished version of the film? What would you want to take away from the set?

Downey: You know why I think this really works? There’s something about the initial breaking of the story and the concept, but whatever the mood board was for this movie, with all those different tones, it was creatively inspired. It’s really an inspired reinvention of this, so what I would take is that moment where the creatives actually broke this story and said, “I think that’s it” because, ultimately, if it’s executed correctly, that’s what you see on the screen, and that’s why I love movies. That’s why I’m a huge fan of movies and I always wonder, “How did they figure this out to entertain me this well?” (So, I’d take) the mood board.

Q: What words of wisdom would you give the younger members of the cast, who are going to have a huge spotlight on them once this movie is released?

Downey: It’s a rough call. We were talking about this just before. It’s like every day you wake up (and) everybody’s even. All of this status or experience, it’s all kind of a projection. To me, what really makes the movie work is that scene in act three where you actually realize how high the stakes are with them and the car. That was grounded by a master but I also think it’s that thing. You never know. It really comes down to, does Jon (Watts, the director) like us? Does he think we know what we’re doing? Every time, it doesn’t matter. Like, “I established this role.” “Can we try one that works next time?” “What did you just say?” “Oh, he’s right.” It’s all about having your feet on the ground and realizing that you always start at zero Mph every day.

Q: How does it feel portraying Tony Stark as the connective tissue across so many different Marvel films?

Downey: Connective tissue. Yeah, bringing it all together. What happens is, things are presented to me that are really well thought-out by folks who have been doing this correctly for a long time, and I go like, “Check,” and then attempt to take the credit in press conferences.  (deadpan) I’m holding this whole thing together. It’s obvious.

Q: You’ve been with the MCU since 2008’s “Iron Man.” We now have Tom Holland coming in to star in this at age 21. Does this feel like a passing of the torch to “Spider-Man” be with Tony being the connective tissue, or do you want to stick around forever?

Downey: Whatever. I’ve been semi-retired since the first weekend “Iron Man” opened. The great thing about life is it is so much, good things happen. You get inflated and then you think, “Oh my God. I’ve created everything that’s going my way.” And then things happen where you go, “Alright, there’s a little evidence to the contrary,” and at this point you go back to, “It’s nice to be on this call sheet.” So, as you can see, I’ve changed dramatically and I’m an extremely humble individual.

Q: Have you finished shooting the “Dr. Dolittle” remake?

Downey: No, we’re going to shoot it next year.

Q: Will it be musical?