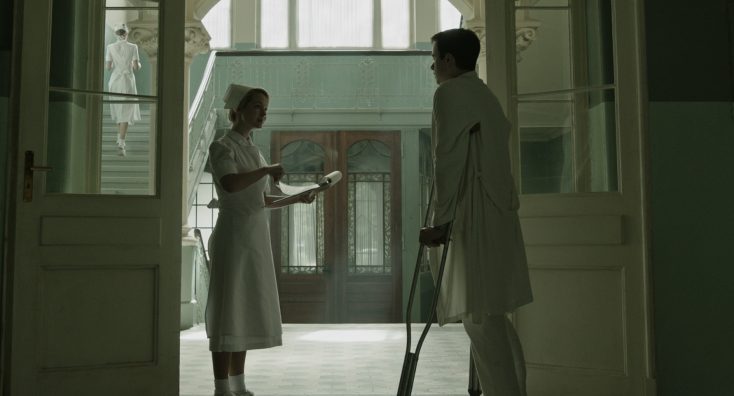 HOLLYWOOD—Dane DeHaan was willing to endure much physical discomfort, including hours and hours in a sensory deprivation chamber for his leading role in the psychological thriller “A Cure for Wellness.”

The 31-year-old actor says it all was worth it to work alongside acclaimed director Gore Verbinski (who helmed three of the “Pirates of the Caribbean” movies as well as the original “The Ring” horror movie).

In the film, DeHaan (best known for his depiction of Harry Osborn in “The Amazing Spider-Man 2”), plays a Wall Street executive who is sent by his company to Switzerland to retrieve his boss, who has gone incommunicado after a visit to a health spa. Upon arriving at the remote mountaintop facility, Lockhart finds his boss undergoing a bizarre wellness treatment administered by the facility’s peculiar Dr. Volmer (Jason Isaacs). Following an accident, Lockhart becomes a reluctant patient at the spa, and the treatment he is given only seems to make him feel more sick every day. He befriends another patient, a mysterious young woman named Hannah (Mia Goth, “Nymphomaniac, Vol 2”), the youngest by several years at the facility, who also under the care of Volmer. Lockhart realizes there’s something fishy going on at the spa and plots his escape with the beautiful Hannah.

The blondish, blue-eyed DeHaan discussed why he wanted to be part of the project, how he endured the rigorous physical demands and revealed his own thoughts on Western society’s relentless pursuit of wellness, which sometimes can come at a cost.

Q: Could you talk about the intense physical demands placed on you throughout the filming?

DeHaan: It was really a month of torture when we filmed all the torture scenes in the movie. It was during the middle of the shoot. It was a long shoot. Gore takes his time shooting things. The isolation tank, that sequence took two weeks to shoot. I spent most of the time underwater, wearing a harness. I was bolted to the side, basically, to keep my body horizontal. I was breathing through an oxygen tube, so it was really intense.

Q: Was that the worst part of it for you?

DeHaan: It was pretty challenging but it’s fun to be challenged in different ways. The sensory deprivation chamber was definitely the most physically challenging.

Q: There’s one particularly intense scene set in which your character is strapped into a dentist chair. What was that scene like?

DeHaan: It was crazy but it also was kind of fast. We shot that in a day or two. That was more terrifying psychologically more than physically. It’s a scene where I didn’t know how I was going to react. I just ended up squealing like a pig and Gore seemed to be into that.

Q: Did you fear dentists beforehand?

Q: When you first read the script, did you wonder where the story was heading?

DeHaan: No, but that’s what you look for. It was like a mystery because you don’t know what’s going to happen next. It’s a surprise until the very end. Gore told me he wanted to make a movie that was inspired by the great thrillers of the ‘70s. That was exciting to me. When I read it, it seemed more than that. It seems liked a wild, crazy original idea. It’s definitely not the kind of movie I would have done with just any director but I felt Gore had a chance of pulling it off.

DeHaan: “The Shining,” “Rosemary’s Baby,” “The Tenant,” “The Omen”—those were the ones Gore had me watch before (we made) the movie. “Rear Window,” which wasn’t in the ‘70s, but (the main character, played by James Stewart) had a broken leg.

Q: Had you seen Gore’s “The Ring?” Do you see similarities between this film and that?”

DeHaan: I’d seen “The Ring.” It’s one of the reasons I thought Gore could pull this movie off. I knew he understood the genre.

Q: What was your takeaway from this movie?

DeHaan: The movie asks a lot of questions. It talks about the sickness in society and people’s need to get richer and more powerful and not consider those around them in that pursuit. People that thrive in that environment think they’re well. They’re not. They’re sick. That’s the sickness and that’s why they need a cure for their wellness.

It’s one of the reasons I feel Lockhart is a perfect protagonist for the story because he embodies that sickness. I liked all the questions that Gore throws in your face about wellness and the cure. Is the cure worse than the disease? Will a pill or a juice cleanse or whatever, why do people do this? And why are people always seeking out these cures? And not worrying about the side effects of them? They’re just thinking about what they’ll benefit from. Both of those things are interesting that the movie explores.

Q: Did you think about your own relationship with wellness?

DeHaan: It did. It’s something I’ve always thought about. In L.A., there are so many people that are focused on being healthy that it’s unhealthy. I lived in L.A. for 2-1/2 years. I don’t anymore. It certainly got me thinking about those things and the central theme of it and my life. That’s one thing that’s cool about the movie is that it makes you sit and think about these things and it lingers. And you realize the cure has side effects. That’s another thing that’s cool about it: it entertains and it terrifies but it also leaves you with this uneasy feeling where you’re asking yourself a lot of deep questions that you didn’t expect going into it.

Q: You wear a cast and use crutches for 80 percent of the film? Was that a challenge for you?

DeHaan: I grew to really love those things. I’m not saying it was great to get into that cast every day but I grew to love it. I got really good on being on crutches. I saw it as a great tool because it’s just another obstacle that’s in my way. It helped make things more compelling and made my job easier. Running up stairs was more compelling if I had to do it on crutches. Gore would say to me, “Can you do that faster?” And I’d say, “No, I can’t. You put the character on crutches. I don’t know what you want from me.” That was definitely one of the challenges.

Q: You shot part of the film at a German former military hospital. Was it creepy?

DeHaan: Yeah. It’s called Beelitz-Heilstatten and it’s an old military hospital. I think Hitler was cured of polio in that hospital during World War I, so it has this dark history to it. They renovated it a lot for the movie but it definitely had a creepy energy. It was kind of a weird, creepy place.

Q: Your character gets lost in a hazy maze in a scene set in a sauna. What was it like filming that scene?

DeHaan: That scene sums up Gore’s visual style. In a lot of ways, I’m trying to make his vision come to life. A lot of times you have to understand what he’s trying to do in the shot and not just let things fly and not worry about my marks. That was an incredibly technical shot. We shot that towards the end of the shoot. Had we shot it towards the beginning, I think it would have been a lot harder. It was just all about hitting the marks and rehearsing it so I could pull off the performance. They were sliding walls.

Q: What was it like working with your co-star Mia Goth?

DeHaan: She’s super-talented and serious and in it for all the right reasons. She was an easy person to act with. She always was there and listening and perfectly cast. It became about understanding what she means to Lockhart in the movie and then bringing it to life.

Q: Is Jason Isaacs as intense in person as his character is onscreen?

DeHaan: In a different way. He’s an old pro. That thing he does he does so well.

Q: The accident scene was intense. You’re spinning around. How was shooting that?

DeHaan: They had a car that was on like a rotisserie rig and they put me in there and rolled it around and around. My arm popped out of its socket during one of the takes. When it did that, I told Gore he had better use that take. He claims he did but I think he actually cut it before my armed popped out.

Q: What was the hardest scene to do?

DeHaan: Not a day went by that was easy. It was five months and it was incredibly physically and psychologically demanding and it was like a marathon. Gore shoots in such a slow, methodical way that it took a lot of patience and perseverance. There were a lot of hard days. It was a tough shoot.

Q: Having worked with Luc Besson in the upcoming sci-fi adventure “Valarian and the City of a Thousand Planets” and with Gore Verbinski on this, how are they similar and how are they different?

DeHaan: They’re pretty different. I made very different movies with them. There’s something about this movie that’s very contained and you can’t miss a beat in it. It all revolves around, in a way, my performance, in that I’m in almost every frame of the movie. The camera’s right in front of me all the way through, and it’s relying on that, whereas “Valarian and the City of a Thousand Planets” is like these intense worlds, everything all around you. There are insane amounts of visual stuff happening all the time. In a way, it’s much more epic in scope. Nothing was practical, so it’s hard to compare the two. But they were both fun to work with in different ways.

Q: You’ve played a number of villains in your career. Are you purposely steering away from villains or are you looking at working with specific people?

Q: After “The Amazing Spider-Man 2,” were there expectations about what would happen with the Harry Osborn character in the future?

DeHaan: Nothing’s going to happen in the future. In a way, I feel like it gave me a career reboot. If I were still attached to that franchise, I’d be playing the same guy in all these movies in basically a supporting role. And now I’ve been given opportunities to make much original content and be in the lead role. I’ll always be thankful for Spider-Man because if it weren’t for that, I wouldn’t be in this movie or in “Valerian.” In a way, I’ll always be thankful that they rebooted it because I could reboot too.

DeHaan: I’ll be the next Leonardo DiCaprio, sure. I’ll take that. There are worse things to be called. I hope so.