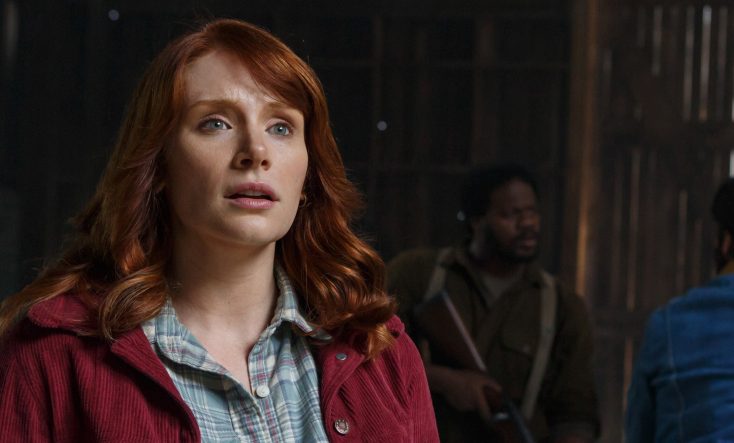 HOLLYWOOD—Disney’s original “Pete’s Dragon” flew into theaters four years before Bryce Dallas Howard was born. Now, the 35-year-old actress stars in the studio’s 2015 update of the iconic fantasy adventure film. In it she plays Grace, the sensible grown daughter of an imaginative old woodcarver (played by Robert Redford) who delights in telling the local children stories about a mysterious dragon that lives in the woods of the Pacific Northwest. Pragmatic Grace has always believed the stories were simply harmless fiction until she meets a 10-year-old orphan who claims he lives in the woods with a giant fire-breathing creature named Elliot, ever since he became separated from his family six years earlier. Elliot turns out to be a gentle furry giant creature that is committed to protecting Pete but not everyone in this sleepy Northwestern town is willing to let them be, and adventure ensues.

Grace, along with a local girl, set out to investigate the boy’s claim and wind up on a wild, eventful adventure in this family film that combines live action and special effects. “Pete’s Dragon” also stars Karl Urban, Wes Bentley, Oona Laurence, Isiah Whitlock Jr., and Oakes Fegley as Pete.

The family-friendly adventure is directed by David Lowery (“Ain’t Them Bodies Saints”) based on a screenplay he wrote with Toby Halbrooks.

Having previously starred in other major studio films including “Jurassic World,” Spider-Man 3” and the “Twilight” saga, Howard is no stranger to big budget, effects-laden movie-making. She spoke last month at a sneak peek presentation of “Pete’s Dragon,” due out Aug. 12.

Q: What did you think when you saw some of the completed scenes of the film?

Howard: I just love it. I had the chance to see the trailer just a little while ago it’s so great, especially having one of the main characters be an animated character, essentially. What’s most exciting for me to see is Elliot come alive and be everything that we wanted him to be.

Q: How did filming this compare to your work on “Jurassic World,” where a lot of the animals aren’t really there? Did that project prepare you for “Pete’s Dragon?”

Howard: It is pretty typical to assume that there’s going to be some kind of visual effects in a film these days and once you do that a little bit, you get what you need to do and what to do to prepare and what you need to imagine, so certainly with “Jurassic World” that was really heavy effects but my experience with (effects) goes back to “Spider-Man 3.”

Q: What made you decide this was the right film for you? Did you say yes right away?

I have the little board book for my kids and read it to them constantly and I think, in loving it, I didn’t want it to just be a copycat movie. I see a lot of those and some are great and some don’t work, but I felt like this story, the themes within the original film was what the charm of that movie was. Otherwise, there are a lot of weird themes and a lot of things you wouldn’t expect in a classic Disney film, but I think what centered that movie and made that film last was the central idea of friendship with an imaginary friend when you have no family and then voila, it’s not such an imaginary friend. So when I heard that it wasn’t a straight-up remake I was like, “Yes, I would love to be a part of that.” Also, because I’m a parent and I want there to be beautiful films out there that have substance and are timeless and have really beautiful values without being didactic, so I’m super proud to be part of this.

Q: How was working with Oakes Fegley who plays Pete?

Howard: Wonderful and there were times where I would ask Oakes for direction. I would say to him, “What do you think?” and he’d really know what to say. He reminded me of my dad (Ron Howard) in a lot of ways. He’s a self-aware person but he’s not aware of the extent of his talent and he’s just really relaxed about it and has a sense of everything. He really understands a movie set.

That’s another thing. To get a kid who is not self-conscious and who has that talent, who is game, has a sturdiness, has a deep sensitivity, intuitiveness is beautiful to act opposite. In addition to that, he gets a movie set. It was amazing. I personally think, if chooses to, he’s going to be a great director. Like Oakes, Oona (Laurence) impressed me and Bob (Redford) and our director. We were always just looking at each other after she did anything and she did everything perfectly, always. Her eyes are amazing. It was one of those things where she’s not actress-y. Oakes is not actor-y, either. They haven’t been spoiled by those kinds of things that can really ruin a person after being catered to. It hasn’t occurred; they haven’t absorbed it. Maybe it’s just how they are but we had a chance to work with these amazing human beings at this amazing time in their lives.

Q: I love movies where kids are the protagonists and they have lives, thoughts and morals, and this film seems to touch on that. Can you talk about that?

Howard: Yeah and I think, as a parent, the reason I love my children to watch films with children in them because it empowers them. It empowers them to have an understanding. It initializes their own story and their own belief system and their own emotional values. They learn to value their feelings.

I remember I was developing a few projects when I saw (Disney Pixar’s) “Up” and I made the decision, “Every movie I do will be starting with the character as a child,” because when you see a child and we’re watching movies or theater or entertainment in any form, we’re leaning toward the truth. We want to see the truth. We know what seems truthful and what doesn’t seem truthful because we’re human beings and that’s how we’re designed. I think when you see a child on the screen or in real life and they call you some vicious name, you believe it more because a child speaks the truth. So, being in a film where the protagonist is a child, it just means everything around it needs to be more honest, all the more real and it’s all the more important because you know that other children are going to watch it and it’s going to have an impact on them, a more significant impact than, potentially, the adults.

Q: How was working with the legendary Robert Redford? Was it daunting to work with him?

Howard: He’s awesome. He is disarmingly relaxed and cool and game for things. I think all of us before meeting him were like, “Ohh, Redford’s going to be here,” and we did a large part of the shoot in advance of that and he came and basically 24 hours later I like “Aw, he’s cool.” He’s really fun to work with.

Howard: I know he walks every day, for miles. There was a horse on the side of the road that he rescued on the second day of shooting, and you know that horse is going to be taken care of for the rest of its life.

Q: Since we haven’t seen the whole film yet, can you reveal whether the dragon will breathe fire?

Howard: (laughing) I do the fire breathing.

Q: How excited are your children to see this film?

Howard: They’re very excited. There was a little bit of trepidation as to whether or not is was a scary dragon or a friendly dragon and what we see in the next trailer will be the final piece of evidence to my kids to prove that it is indeed a friendly dragon. They’re so excited and I used the trailer coming out as like bait. I’ve been saying to them, “In two weeks the trailer is coming out and you’ll be allowed to see it. You’d better (be good”).