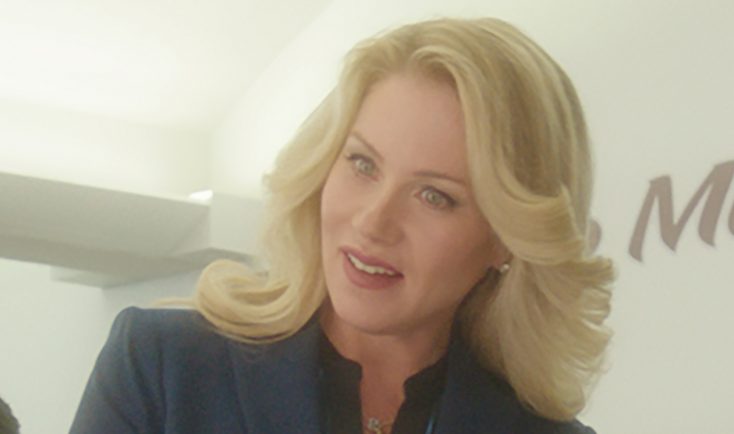 As Gwendolyn, the prissy head of the PTA at her children’s school, she and her mean girl mom pals have it in for seemingly imperfect—or maybe a little too perfect—moms like Amy (played by Mila Kunis), who try to hold down a fulltime job while raising children. The pressure on Amy to be perfect results in a breakdown one day and she and other outcast moms (played by Kristen Bell and Kathryn Hahn) band together to teach Gwendolyn and her snobby friends a lesson. The comedy, written and directed by Jon Lucas and Scott Moore, also stars Jada Pinkett Smith and Annie Mumolo.

Q: So you’re a mom in real life. What is the most useful advice that you received from your mom that you are going to pass along to your kids?

Applegate: Survival mechanisms. My mom is a real survivor. She’s incredibly strong. She’s pushed through a lot of stuff that was difficult and did it gracefully and always instilled in me that I had that strength as well, so I hoped and do tell my daughter that she’s incredibly strong. She’s such a strong, smart, awesome kid. So I’ll keep doing that.

Applegate: I think that this movie is depicting real moms who are not perfect. And the term “bad mom” is from the perspective of someone who’s judging someone who fails a little bit every once in a while. If we can accept that it’s okay to fail, then that doesn’t make you a bad mom. That makes you an awesome mom. It gives your children an opportunity to see that mistakes are a part of life and a part of growing. That’s what these moms are doing. They’re tapping out for a minute to rejuvenate themselves so that they can be stronger and better for their children. Every day our parenting is scrutinized by other mothers, and there are blogs and opinions telling us what to do on breastfeeding and vaccinating. There’s so much pressure to be perfect and I think this movie is saying it’s okay that we’re not.

Q: So, should the name of the movie be changed to “Imperfect Moms?”

Applegate: Yes. Completely imperfect, but the children are happy and thriving and smart and strong and I think there’s a difference between these moms and crappy parents. This is not being a bad parent. This is just mom’s going, “I’m not perfect sometimes.”

Q: Is that something you learn to do because when you’re a new mom you want to do everything perfectly?

Q: Is there a correlation between being a good mother and acting? The only way to become one is to make mistakes?

Applegate: If you ever think you’re the best, then you’re the worst actor in the world. There’s never a cap. Meryl Streep — well, Meryl Streep probably sits there and knows she doesn’t need to do much more than what she’s doing, but she’s out there still pushing herself. She’s taking on challenging things. That’s part of life. Practice makes progress. It doesn’t make perfect, and I think that’s what I’m trying to teach my child. In life, there isn’t a cap to what you can do, but never be complacent. There’s so much more on the other side of it. Don’t play a board game with my kid. She cheats and if she doesn’t win it’s the worst. And then she says she’s never playing this again and then she throws the deck.

Q: Have you ever been involved in PTA?

Applegate: I’m about to. We’re starting kindergarten in August, so that’ll be my first intro in the PTA. We’ve only been in pre-school where we have room moms, but they’ve all been pretty cool. At our school there’s the PTA, which is separate from the fundraising organization. So, there’s a whole organization that just fundraises for the school. It’s a public school, so we have to have it, but I don’t know what to expect. I don’t care what anyone thinks of me in the sense of I go pick up my daughter in pajamas and dirty hair that I haven’t washed up in seven days. I haven’t had a proper pedicure or manicure in about a year and half, so I’m really not that guy who cares if people are judging me as a parent or a human. So, I think I’m going to be okay.

Q: What kind of latitude did you have in terms of input for your character?

Applegate: They just kind of left it up to us. They were really fine with it. They would always make me as the PTA president who has speeches say, “Give us about 10 minutes. Just riff by yourself at the podium because need to have some fill in the back.” And I’d be like, “Okay. Here it goes.” Some weird dialogue that’s in the movie came out of those 10 minutes. It was so intimidating to me because that’s not my jam. It makes my palms sweat and my whole insides hurt.

Q: It’s unusual to have a big studio film that’s so female-predominant. Can you talk about working with the other ladies? Did you have a kind of sisterhood?

Applegate: A little bit. We’re bonded for life. We’re six women who are completely in love, and when we all had the opportunity to be on set together we’d sit in a circle in our chairs and just yak. They couldn’t even get us to set usually because we were in a heated conversation about politics. It was either politics or our children, mostly politics at that time. There was a lot of that; really heated conversations, all on the same side, and all preaching to the same choir. Like everyone else in the entertainment industry we’re just staunch Republicans. (She laughs.) Women’s rights? Psh.

Q: You survived breast cancer. Can you talk about what you learned most about that experience?

Applegate: I don’t know what I’ve learned from it. I don’t know. I haven’t learned anything from it. I just try to live as stress free as I can because nothing really is that important to put your body through that kind of stress. Stress is a bad one. There really isn’t anything important. Are you breathing? Then you’re good. But I’m the go to girl now for anyone who has a friend that’s diagnosed and I will usually take them through their full journey. I’ll sit on the phone for hours and hours and hours and that’s kind of my pay it forward. I try to build a sisterhood. I know women now who are doing that for their mutual friends and so on and so forth. It’s about building this community. It’s a beautiful community because no one really understands what you’re going through.

Q: But you took it a step further even then that by creating your charity, Right Action For Women. What’s the status of that now?

Applegate: We’re going to try and create a bigger umbrella than just MRI. We’re trying to sit down and expand what we’re doing. MRI saved my life, but there’s also new tests coming out. There’s the importance of gene mutations. There’s all sorts of things and we’re really going to start to open it up now that we’ve been lucky enough to have a lot of companies partner with is and we’ve done a lot of fundraising this year, so we have enough to invest to make it a bigger and all inclusive foundation rather than just paying for people’s MRI, which we still continue to do.

Q: Does your organization advocate for BRC1 genetic testing?

Applegate: I’m going back to being a mom. I consider myself a stay-at-home mom. That’s my identity. I do an (acting) job a year to pay some bills and a little side voiceover or something or an endorsement—trying to find work that doesn’t take me away from my kid. So, right now we’re just gearing up for kindergarten, and that’s my year. We’re going from a little teeny hippie pre-school to 600 kids in a public school.

Q: Would you consider embarking on a writing career so that you could stay home full-time?

Applegate: It’s funny that you would ask. I’m considering deeply starting a blog that will be my version of what a mom blog is and what a mom blog should be which is super honest, and no advice because I don’t give other mom’s advice. Just a little look into how my day goes with my kid and the stuff that goes through the heartbreak of loving someone so much, things like that. That’s a thought that I was thinking of possibly doing because I have a lot in here that I have to say. I don’t know if I’d be good at writing. I love acting, but in spurts.

Q: What director would you most want to work with?

Applegate: My deepest regret in life is that I never got to work with Mike Nichols. I was a fan since I was a little kid when my mom would play Nichols and (Elaine) May albums for me. I’ve been inspired by that man. When he passed away, I thought, “It’s sad that the world will not get more from this genius.”