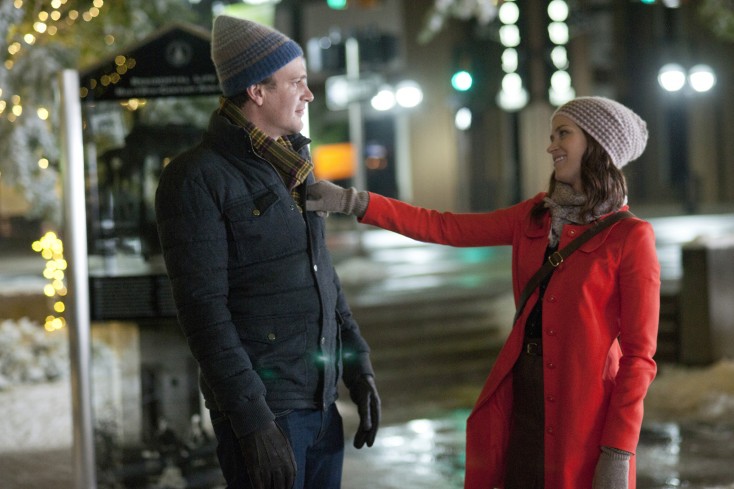 Tom (JASON SEGEL) and Violet (EMILY BLUNT) keep getting tripped up on the long walk down the aisle in "The Five-Year Engagement." ©Universal Studios. (Click on photo for hi-res version).

HOLLYWOOD—Jason Segel and Emily Blunt became friends when they co-starred in the 2010 adventure-comedy “Gulliver’s Travels.” Segel, who also is a screenwriter, could think of no one other than the British beauty (best known for her work as Anne Hathaway’s snooty office nemesis in “The Devil Wears Prada”) to play Miss Piggy’s put-upon secretary when he was penning “The Muppets,” in which he starred last year and sang the Oscar winning “Man or Muppet.”

Figuring he and Blunt had a special onscreen chemistry, he finally wrote a script in which they could play romantic partners. The two now star in “The Five-Year Engagement,” a story about a couple who just can’t seem to find the right time to tie the knot, especially while trying to balance their careers with their relationship.

Segel, 32, and Blunt, 29, who plays Tom, a chef, and Violet, a behavioral researcher, respectively, recently sat down to talk about their friendship and playing lovers.

Front Row Features: How hard is it to make a romantic comedy about people who want different things from life?

Segel: It was a challenge to write and a challenge to edit because there are no big plot movements. There’s no car accident. There’s no earthquake where someone dies, and there’s also no big contrivance, like I’m a scientist and she hates science. (He laughs.) It’s like a very earnest explanation about how a relationship is fluid. When you choose a partner and say, “I want to marry you,” you’re saying it not for this moment, but for your whole life. It’s about taking a good, hard look at relationships.

Front Row Features: Emily, Jason wrote this with you in mind for the role of Violet. What did you like about the script?

Blunt: It was such a simple premise and there was room to play as actors. There’s a lot you can do to make these relationships interesting and complex and messy and flawed and loving, and all of those things. It’s a movie with a lot of heart. The situation these two are put in is ludicrous, outrageous and heightened for the sake of creating a spectacle of a movie, and yet you invest in them as a couple in a very real way.

Front Row Features: Did you ever have to suggest how engaged couples act since you’ve actually been engaged?

Blunt: No. (Co-writer and director) Nicholas Stoller has been married for a long time, so he really gets it. And Jason, even though he hasn’t been married, he’s a romantic. He’s been in long-term relationships. Everyone who was involved (in the film) has had relationships, so it felt very collaborative. They had a great first draft and then I signed on and I added a couple of ideas. Some were incorporated and some weren’t but it was very collaborative with different perspectives of what we feel about relationships.

Front Row Features: Violet and Tom meet at a costume party where Violet is dressed as Princess Diana and Tom as a pink rabbit. Emily, what did you think of yourself dressed up like Diana?

Blunt: Once the wig was on, it was pretty surreal.

Front Row Features: Do you remember her? You were kind of young when she died.

Blunt: I just remember she was so beloved and I was the one who broke the news to my parents that she had been killed. I had been practicing on my cello that morning and I saw the news on television. It was an awful moment. She died in ‘97, so I was 14.

Front Row Features: How did this idea of Princess Diana as a costume come about?

Segel: We wanted something to juxtapose with my dirty bunny outfit. It was the silliest costume for my character and the epitome of grace for hers. It was a bit of metaphor for the union of these two characters coming together, like the most graceful, elegant woman ever and a big, sloppy bunny.

Front Row Features: Emily, you and actor John Krasinski have been married for nearly two years. Have you had to make some compromises because of your  marriage?

Blunt: Not at all. Things have only gotten better, more exciting and more boundary-less since I met John.

Front Row Features: Would you go back to England to start a family?

Blunt: No, this is my home now.

Front Row Features: What about you, Jason? Do you look forward to marriage and family?

Segel: Yes, I’d love to have kids some day. You don’t write “The Muppets” for no reason. I love kids and I love being around them, but there is no rush for me.

Front Row Features: What was the biggest challenge for you in writing this?

Segel: What I thought was most important was in the in-between scenes, where it looks like they’re best friends. I know that we can do the acting scenes because we’re good at what we do, but when they’re walking around I wanted it to look like they were best friends. That’s why I wrote this for Emily because I knew we could look convincingly like best friends on screen.

Segel: I try to write every part as though I’m going to play it, including the female parts. I don’t think of how a girl would speak or talk. People are all the same.

Front Row Features: Like “Forgetting Sarah Marshall” and some of your other films, you get naked again in this. I guess you’re not afraid of showing off your body.

Segel: I love it. I really do.

Front Row Features: Was it real snow you were rolling around in naked in “Five-Year Engagement?”

Segel: It was. They tried to put a fake layer of warm snow down and I was still freezing. There were people surrounding me with camera phones and it was not pleasant.

Front Row Features: Emily, you and Alison Brie, who plays your sister, Suzie, in the film, have a great scene in which you discuss your relationship problems using Sesame Street character voices so as not to upset the children present. How long did it take you to get the Cookie Monster voice down?

Blunt: I looked him up on YouTube, and I had watched the Cookie Monster before. But when I had to do the table reading, it was scary. It’s nice, though, when people laugh and love it. We had a blast doing the scene. Our voices were shot by the end of the day because we filmed it all afternoon.

Front Row Features: Jason, after working on “The Muppets” for close to 10 years, was it nice to get a break from working with puppets in this?

Segel: There was a turkey puppet that was cut out so this is my first film without a puppet in years. It all started with “Sarah Marshall.” It was nice to be acting next to a human.

Front Row Features: Do you have any ground rules for relationships and love?

Segel: It depends on if you want to be happy.

Blunt: Some people are happy cultivating drama. I personally loathe it.

Segel: I think to each his own.