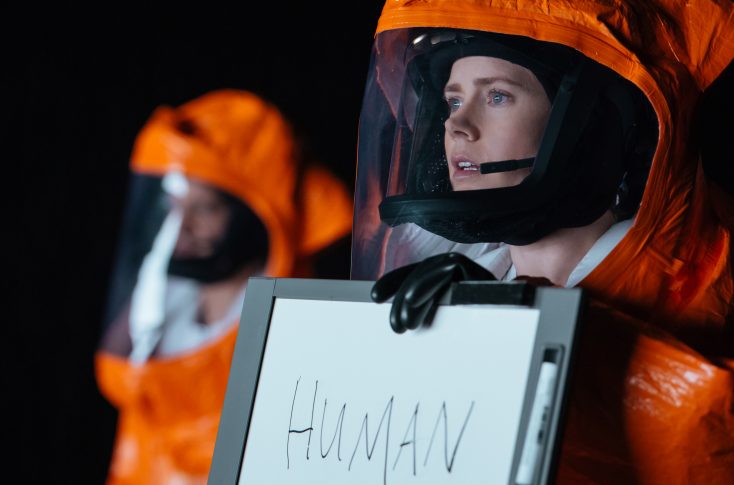 TORONTO—Amy Adams is a five-time Oscar nominee and with her new sci-fi film “Arrival,” there is already buzz about her making another trip to the Academy Awards ceremony in 2017.

The titian-haired actress plays Louise Banks, a linguistics expert who is recruited by the U.S. military to decipher communications from an alien race that has landed on Earth. The fate of the planet is in her hands along with that of Ian Donnelly, a theoretical mathematician (played by Jeremy Renner), in determining whether the visitors are hostile or friendly. (The beings have arrived in egg-shaped vessels in various locations around the world, so other countries are working on the communication problem at the same time, but not necessarily in cooperation with each other.) The drama, written by Eric Heisserer based on Ted Chiang’s short story, “Story of Your Life,” is directed by Montreal filmmaker Denis Villeneuve (“Sicario,” “Prisoners”).

At September’s Toronto International Film Festival, Adams, who was born in Italy to American parents, spoke about tackling the cerebral sci-fi project, which also contains a heartwarming story about a mother and child, shooting the film on location in Quebec, playing a linguist and how being a mom has influenced her choice of movie projects.

Q: How did you come to the project?

Adams: They sent me a script. No. It sounds so simple, but I was at a point where I wasn’t really reading scripts and my wonderful team said, “No, no, no. You’re reading this script.” I read the script and I fell in love with the character. And then I got to the end of it and I had to go back and re-read it again, but really the emotional core of this is what drew me to it, and then meeting with Denis and knowing that he had the same reaction. Through it has sci-fi and political elements, it really is this woman’s story, and it’s a story that she’s telling to her daughter and that’s a beautiful thing to me.

Q: Were you able to contribute to the development of your character because it’s difficult to find a strong female character, especially in a sci-fi movie? How was working with Denis Villeneuve, the director?

Adams: Anytime you get a character that is as well developed and emotionally vulnerable and yet intellectual with the strength of character, that’s a real gift as an actress. It’s a gift because it’s a reflection of what women are to me. They’re not one thing. They’re not purely intellectual. They’re not purely vulnerable. We’re fully fleshed out human beings and to see that reflected so beautifully was a pleasure and playing it was awesome. Denis was a joy to work with. I would say it’s such a bummer he’s not here because he is so much fun and he has so much passion and so much love for what he does and you feel it every day when you arrive on set. I always felt so supported. He’s the best. If you do a good job, he’s like (in a French accent), “I deeply love what you have done,” and it’s a beautiful thing that he does. That’s my bad Denis impersonation. I do it all the time.

Q: Was there a moment when you found out the truth about the character, like when you were reading the script?

Adams: I come to scripts very open. I was moved in the first 10 minutes. I thought I already love this woman and I love what she’s bringing to it. I read the whole script and it wasn’t until I got to the end and she’s talking to the general that I was like, “Oh!” And then I went back and I re-read it with that in mind and it created this complexity and this duality that I had to play. I thought, “Well, that was really challenging,” and it’s just this beautiful dance that Louise gets to do between time and space.

Q: You worked with a linguist from Montreal to play your character. In the whole process, what did you learn about communication and the fact that miscommunication in the past has led to great conflict?

Adams: You mean personally what did I learn? I’m still working on that, right? We all are. Communication, as a child, we learn. I’m watching my child learn how to communicate and learning which words to use. Choosing the wrong words is one of the most beautiful things to watch a child do because you can tell their intent is there and you know what they mean even if they’re not using the right word. And so, what this film has helped me remember being a mom is it helped me remember that intent is just as important as content. Sometimes, in today’s media, intent gets lost inside the content and that’s why I think it’s so important to have face-to-face communication, and that’s what this film reminds me. You do have to look at somebody to communicate effectively with them and I hope we don’t lose that.

Adams: I loved Montreal. It was a great place. I brought my family, so it was a great place to have my family for the summer. There’s this great karaoke bar, which for me, is very good. I took everybody out. Denis does a mean (version of Adele’s) “Skyfall.” He’s going to be so mad at me. Also, I love that Denis’ family was there because the core of this film for me is family. He had his family on set and I brought my daughter (Aviana, 6) on set, which I usually don’t do, but the set was so calm and so friendly and so familiar that it felt very welcoming.

Q: What was your approach to the overlapping storyline?

Adams: There’s this traveling in a non-linear way that my character does. I never approach anything with this sort of like, “Let’s just get the day done.” It’s just not in my nature. I’m very, very meticulous in how I approach things and Denis is as well. We sat down and talked about it before to talk about the journey she’s going to take. For me, what started happening and how I knew I was in character—and this is how I spent the shoot—was anytime I felt nauseous, I knew I was there, because Denis said, “I want her to feel off-balance. I want her to feel seasick like something’s happening and she doesn’t know what it is.”

It’s a very delicate balance of playing somebody who we believe had this moment of grief that she shares with the audience, so I have to bring this depth to the character, but at the same time, has it happened yet? Has it not happened yet? I really loved getting to explore those themes. We did all that work beforehand, so when I got to the set, it was just about finding the right stomachache to get through the day.

Q: You and Jeremy Renner previously worked together on “American Hustle.” Did that prior connection help boost the chemistry when you started working on this?

Adams: We work very similarly in the fact that we both do a lot of work outside of set and when we get there, we’re ready to go. Then there’s all of the problem solving; it’s not big issues. It’s little things in working out blocking and you get to enrich it as opposed to getting to figure it out with somebody. One of the things I’m so proud of is, very often friendship between a man and a woman isn’t brought to screen without a heavy sexual energy. I love to see that because I love the friendship that these two characters developed. I think any great relationship is based on respect and friendship and I’m always happy when that gets to be developed on screen.

Q: Your character Louise says at one point, “There are days that define your story beyond your life.” Having earned five Academy Award nominations already, how much it would define your life to actually win an Oscar?

Adams: I won’t have to answer that question anymore, so that would be good. (She laughs.) No, I’m being silly. Will winning an Academy Award define my life? I don’t know because I haven’t won one, so I’ll let you know if that ever happens. So far, not winning hasn’t defined me, so I feel pretty okay with, more than okay. I feel super-grateful and blessed to get to even work in this industry, let alone get to work with people of this caliber. And then on top of it, to receive any recognition on top of that is just beyond. I’m always grateful for it, but it doesn’t define me.

Q: You have roles that range from Louise Banks in this to Lois Lane in “Man of Steel.” What drives you as to what project you want to do next?

Adams: It’s changed over the years. I think being a mom has changed it. I’m really concerned now with where things shoot like during the school year, it’s hard to bring my daughter out of Los Angeles, so I’m like “Hey, L.A. Film Board, let’s get some stuff happening in L.A.” That starts to define it a lot for me now and it’s hard to let go of projects just because they don’t necessarily work, but that’s where I am now and I’m happy to get to be in that position where I can take some time and make those choices that are best for my family.