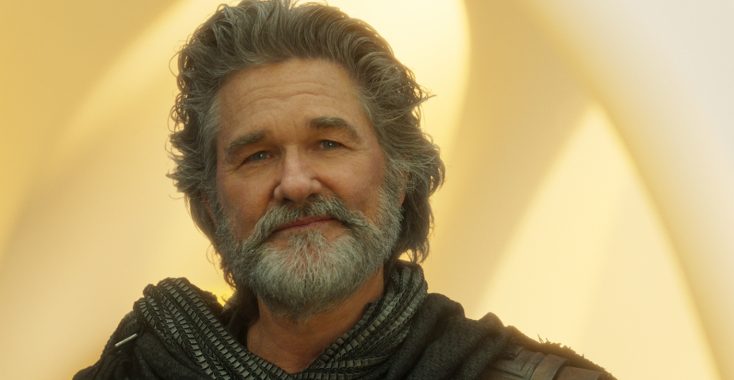 HOLLYWOOD—Kurt Russell is a Hollywood action icon. Having established characters like Snake Plissken in the “Escape” franchise to RJ MacReady in “The Thing,” Russell adds yet another memorable character to his oeuvre, taking on the role of Ego, Peter Quill/Star-Lord’s long lost alien father in Marvel’s “Guardians of the Galaxy, Vol. 2,” the long-anticipated sequel to the hit 2014 space adventure comedy.

Russell’s Ego is a god-like figure who arrives in a groovy egg-shaped spaceship on a planet where Star-Lord (Chris Pratt reprising his star-making role) and his crew of dysfunctional “guardians” have crash-landed after escaping an attack. After revealing his paternal connection, Ego transports his son and some of Peter’s friends to his private planet, which is beautiful but eerily deserted. Raised as a petty thief in rough circumstances, Peter/Star-Lord contemplates staying with his dad and developing his newfound god-like powers, while he also tries to figure out why the man abandoned him and his mother back on Earth years before. Like anything that seems to be good to be true, there is a cost to accepting this newfound power and position.

Zoe Saldana, Michael Rooker, David Bautista, Karen Gillan and Sean Gunn reprise their roles alongside Bradley Cooper and Vin Diesel, who lend their voices once again as scene-stealing computer-generated characters Rocket (the raccoon) and music-loving Groot, appearing as a much younger version of his twig-like self than in the previous film, respectively. New to the cast are Oscar winner Sylvester Stallone, Pom Klementieff and Elizabeth Debicki that present a host of challenges to Star-Lord and his crew.

The action-packed, laugh-filled adventure is written and directed by James Gunn, who previously helmed and co-wrote the original “Guardians,” based on the Marvel comic series. It also contains another feel-good soundtrack of ’70s pop tunes that gives the franchise its unique nostalgic theme. (Prediction: 1972’s Brandy (You’re a Fine Girl) by the band Looking Glass is likely to return to the Billboard charts after the release of this film.)

The ruggedly handsome Russell, with his shaggy gray hair and piercing blue eyes, revealed how cleverly applied makeup and little movie magic managed to turn back the clock several decades on his 66-year-old face and body (in an opening flashback sequence), joining Marvel’s “Guardians of the Galaxy” franchise and being a sex symbol.

Q: What was the initiation process and what convinced you to join this rag-tag bunch?

Q: He hosted a dinner party?

Russell: You have to bring over some food. (laughing) Nooo. The truth is that when I read the script I wanted to make sure I was understanding it correctly. I hadn’t seen the first movie because I’m not much of a moviegoer. I knew that everybody loved it, though. I also knew that when I was doing “Hateful Eight” stuff like this (press conference) and all of a sudden, boom, boom, boom, my phone and the people around me were saying, “Are you going to be Star-Lord’s dad? You’re going to be Peter Quill’s father? Are you going to do ‘Guardians of the Galaxy?’” And I was like, “Guys, I don’t really know what they’re talking about. I saw the (original) movie and when I saw the movie I immediately started getting it. But I also immediately started wanting to do it. That immediately was followed by, “Everybody loved the first movie. What you don’t want to do is something that’s going to make (the audience) not like the second one,” so you do feel that pressure, so I said, yeah. I told James (Gunn) “I don’t want to mess this thing up so I need your help.”

Q: What do you think now that you’ve seen the retro version of your character, in a little younger fashion?

Russell: That was pretty interesting. I didn’t really think about that a lot because they’ve got all the trickery in the world. Dennis Liddiard has been my makeup man in 28 movies. Before we went in there—because we assumed it was going to be all CGI—and he said to James (Gunn) and the cinematographer (Henry Braham), “I can young this guy down. I’ve got some tricks in my bag. Would that be helpful?” And they said, “Yeah, as much as you can. That would be great.” I was speaking to the gal last night who does the CGI. She said, “What did you think of what we did?” I said, “I thought it was great but I understand you didn’t do a whole lot.” She said, “No, I didn’t. We touched it up here and there but (Liddiard) did a fantastic job.” He does have a lot of tricks, not just makeup—cosmetics, I should say—but there’s a lot that goes into that, actually. It’s not just what you think. Without giving away things, because I hate giving away tricks, you have to create an impression, not an image. There’s stuff that goes into that. You want them to look certain places and not other places. Then, when you’ve got the help, of modern day abilities with technology, I think it’s a much more natural look.

Q: You’ve been part of the Disney family for many years. What’s it like coming back to the company, which has this Marvel franchise, and working with them again?

Russell: I do feel I have a special relationship with Disney but the truth of the matter is, every time you go to work, you’ve got to make the team. It doesn’t make any difference what movie or television show, whatever it is, you have to go in there and, hopefully, make them feel good about the decision they made to hire you. That’s just the way it is. You can’t walk in there and say, “I’ve done a bunch of stuff. You all have seen it, haven’t you, so we’re good, right?”

It’s like, so what? You’re only as good as your last (time) at bat. I just wanted to make the team. I wanted to be helpful and I wanted to be good. I was very fortunate that I ran into a team that had a terrific manager (Gunn, the director). He really knows his world. He also knows how to execute. He has cast these people perfectly. It was going to be hard for me to measure up to that, I knew that (so I) asked him a lot of questions. I drove him a little bit nuts. By the way, Goldie (Hawn, Russell’s longtime soulmate) had a feeling about that.

Q: Has being a sex symbol helped or hurt your career? Does it still?

Russell: (smiling) I don’t know about you, but I’m not as good as I once was but I’m as good once as I ever was.