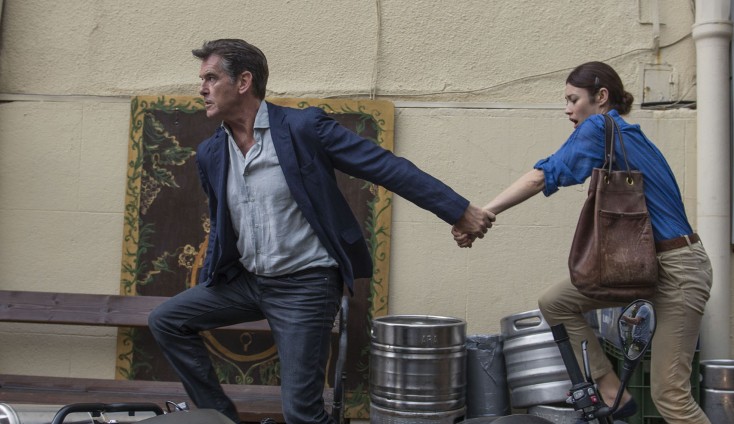 HOLLYWOOD—Olga Kurylenko is no stranger to co-starring alongside hunky leading men. She played a Bond girl opposite Daniel Craig in “Quantum of Solace. “ She co-starred with Ben Affleck in Terrence Malick’s “To the Wonder.” Last year, she played the mysterious Julia in the Tom Cruise starrer “Oblivion.” She’s got “The Perfect Day,” with Benicio Del Toro coming out soon. She co-stars with Russell Crowe in the upcoming “The Water Diviner,” which the Academy Award winner also directed. And she co-stars with French actor Vincent Cassel in the upcoming “Momentum,” which was shot in South Africa.

The former model now stars opposite former James Bond portrayer Pierce Brosnan in “The November Man.” The action-packed spy film is based on the Bill Granger’s “There Are No Spies” novel, and is directed by veteran filmmaker Roger Donaldson (“No Way Out,” “Thirteen Days”), from a script by Michael Finch and Karl Gajdusek.

Kurylenko plays Alice, a social worker that helps girls fleeing sexual slavery and human trafficking in Eastern Europe. She is the last person to have seen a key witness in a case that could expose a dangerous corrupt Russian politician. Brosnan plays a semi-retired spy, who is coaxed back into the field by a former supervisor, but as the search for the witness intensifies, it becomes increasingly difficult for him to know whom to trust.

Brosnan, a producer on the political thriller, says the part of Alice was written for Kurylenko.

“We were all big fans of Olga’s work—my business partner Beau St. Clair, Roger and myself,” says the actor.

“She was the prototype for this character, “ says St. Clair, who has produced “The Thomas Crown Affair,” “The Matador” and other films with Brosnan. “It was amazing how time worked out and we got her. She’s the perfect Alice.”

Looking summer-like fresh in a white patterned top and skirt accented by a colorful pansy pin, the 34-year old actress spoke about her newest role in an action movie, playing alongside two former Bonds and other hunky leading men and walking in L.A.

Q: You’ve done these action movies many times before. What made you want to be part of this?

Kurylenko: There were many factors. First of all, this script was great. It was fun to read. I really wanted to know what was going to happen and how. There was the suspense we all want in thrillers. So when the script is good, and it’s an impatient read, that’s a good sign. I like my character. She is multifaceted and had so much at stake and so much to hide. The fact that she was the main key to the story also was appealing. She didn’t just walk around looking beautiful. There’s so much about her that she brings to the story.

Q: How was it working with Pierce Brosnan?

Kurylenko: I’ve always have admired him. I watched his movies even before I was an actress. I think we’ve all been mesmerized by Pierce. He’s a beautiful man. He has a presence on screen. He’s also a great actor, so it was a pleasure to work with him. The fact that he thought of me for the part was flattering. It’s always a pleasure to realize that those grand people actually know you exist. (She laughs.) It’s very flattering.

Q: Were you familiar with Roger Donaldson’s previous films?

Kurylenko: Of course. Roger is a great moviemaker. He knows how to make a good thriller. He’s so detail-oriented. He knows how to raise that suspense, and make the audience wonder what’s going to happen. The way he edits—when I watched the film at the premiere the other night, it was a complete surprise. The surprises are spread throughout the whole movie. It’s never boring. There are parts of the puzzle come in until the big picture is revealed. It’s just so delicately done.

Q: The sparkly mini dress you wear in the scene where you go to seek justice against the evil Russian presidential candidate, Federov, is quite eye-catching. Was it uncomfortable to wear?

Kurylenko: Thank you, but no. It was very easy to put it on. It’s like a sock; it’s stretchy. Two people could have fit in that dress. It was very comfy. It didn’t restrict my movement or anything. I could walk in it and run. But the shoes that were grrrr! At least they let me take them off when I had to run. You know what I love, is the contrast between what this girl I play does in real life and the call girl disguise she wears in this scene. What clothes and makeup do to a person is amazing. You can be a regular girl but then you dress up and wow!

Q: That scene also was pretty emotionally intense, I would imagine. Alice needs to get close to him and yet he repulses you. Can you talk about shooting that scene?

Kurylenko: It was an interesting scene to film, but Lazar Ristovski, the actor who plays him, was lovely in real life.

Q: Your character helps refugees. Didn’t you do some volunteer work with refugees yourself?

Kurylenko: Not refugees. I was helping out with the orphanage problem in the Ukraine. It’s the organization that was responsible for closing down the (state-run) orphanages and placing kids with families. It’s sad because in Ukraine there are tons of orphanages and kids still live like that. There is, like, one woman looking after 100 kids, so she can’t pay attention to each and every one. They grow up with psychological problems. I saw the babies that were abandoned. I wanted to adopt them all. I held one and it was just heartbreaking. My mom came with me and she still talks about that little girl I was holding in my arms.

Q: You brought your mom and dad to the Hollywood premiere the other night, right?

Kurylenko: Yeah, I wanted to show them L.A.

Q: You starred in “Quantum of Solace” with Daniel Craig, and now you’ve worked with Pierce Brosnan, a former James Bond on a spy film. Do you take some pride in that?

Kurylenko: It’s like I’ve done two Bonds. (She laughs.) It was great. We had a ton of action and we both came in with certain skills. We came prepared, with our past in the Bond movies.

Q: You’ve worked with a number of other male action stars. Do you find them to be regular guys on set? Has anyone been difficult to work with?

Kurylenko: It depends on the person. Some guys surprise you by being regular guys, and you think, “Wow, I wouldn’t have expected that.” Others are unapproachable; they keep their distance. You see everything. Since we’re were speaking of “November Man,” and of Pierce, I just wan to say he’s exactly that guy that you discover is down to earth and accessible to the people who work with him. He’s very cool and very real and you can talk to him and sit down and tell jokes. He’s just there for you and a real person.

Q: You’ve been acting in movies now for nearly 10 years?

Q: Since then, you’ve amassed a large body of work.

Kurylenko: My only regret is that I started so late. I didn’t start as a teen actor; I wasn’t a child actor. I wish I had done that.

Q: But you established yourself early on as a model and had traveled the world, right?

Kurylenko: Yeah, that’s true. Modeling gave me a good base for patience, tolerance and being able to get around. By the time I got into acting, I could speak several languages and slowly I became very independent. I was just thrown into it. I had no preparation. I was not independent when I was growing up, I can tell you that. When I arrived in Paris when I was almost 17, I had to suddenly wake up and I had to be smart and thoughtful. I wasn’t used to the surroundings. I was so scared of that that I was almost overly wary. I’d heard the horror stories. I was so shy that I stayed home all the time. I But I had to learn to be brave and get out of the house.

Q: Was the move to acting deliberate?

Kurylenko: Yes, I wanted to do it. I didn’t have time to go to acting school but I took acting workshops. I didn’t want stop earning modeling because it was important for me to live and support myself, and I had to support my family. Too much depended on me so I had to keep working. So I would do one- or two-week workshops, intensive classes, but they never went on for more than a month. I did that in Paris and New York while I was modeling.

Kurylenko: In London, which is close to Paris. I moved there because I was making more English-language movies. I’d love to go back do more French movies; it’s just a question of finding a good one. London is so much more connected to L.A., so it makes sense for me to live there, and I don’t have to move here. Not that I don’t love L.A. (She laughs.) I love the weather and you can be so in touch with nature. The day after the premiere I went hiking in the forest near Pasadena.

Q: Did you reach the waterfall?

Kurylenko: We went up there but it was dry. It was so sad, because we had taken our bathing suits.