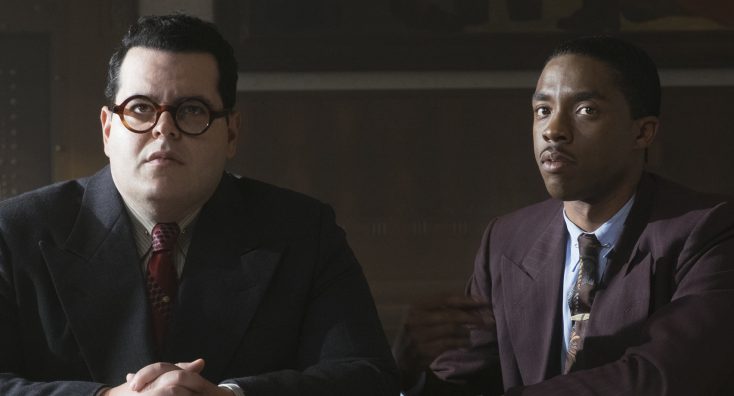 Chadwick Boseman has a history of starring in biopics that are entertaining but not exactly stellar. While his performances in the Jackie Robinson story “42” and the James Brown feature “Get on Up” were noteworthy, the films themselves were ultimately forgettable.

That tradition continues with Open Road Films’ “Marshall,” a feature that focuses on one particular trial in the career of a young civil rights attorney named Thurgood Marshall who would later go on to become the first African-American Supreme Court Justice. Clocking in at 118 minutes, the movie never spends enough time developing Marshall’s character or his career and instead plays more like a film that highlights Jewish attorney Sam Friedman’s (played by Josh Gad, “The Book of Mormon”) reluctant start as a civil rights advocate. Perhaps “Friedman” would have been a more appropriate title. The film is directed by Reginald Hudlin, whose previous credits include the ’90s comedies “House Party” and “Boomerang.”

Taking place in Bridgeport, Conn., in 1941, “Marshall” follows the two attorneys as they defend a black chauffeur with a questionable past (played by the always wonderful Sterling K. Brown, “This is Us”) accused of raping and attempting to kill his white Greenwich employer (played by Kate Hudson, “How to Lose a Guy in 10 Days”). Although Marshall, who travels around the country representing falsely accused African-Americans, is an experienced criminal defense lawyer for the NAACP, the judge assigned to the case (“Babe’s” James Cromwell, who continues his tradition of almost always playing the antagonist unless he’s starring opposite a pig) refuses to allow the out-of-state attorney speak in the courtroom— presumably because of the color of his skin. So, Marshall basically sits silently at Friedman’s side throughout the proceedings, teaching the insurance lawyer how to try his first criminal case by writing notes on pieces of paper.

Whether viewers are familiar with The State of Connecticut v. Joseph Spell trial, it’s outcome is easily predictable, making “Marshall” a fairly paint-by-numbers courtroom drama. Sure, the performances are strong (even though Brown is criminally underused as Joseph Spell), but the film lacks any real tension, which is a shame since the case itself was so sensational. Writers Jacob and Michael Koskoff try to add a few scenes in the film involving Marshall’s personal life, and his wife Buster’s (played by Keesha Sharp, “Girlfriends”) struggles to conceive a child, to add further drama to the story, but those scenes are so brief they don’t have any real emotional impact and just come across as unnecessary filler. The quick cuts and pacing of the first quarter of the film also impact the rest of the movie negatively, as the audience never really is given sufficient time to connect with Boseman or Gad’s characters before the trial begins.

While it would be impossible to cover Marshall’s entire career in less than two hours, one can’t help but leave the movie wondering why the filmmakers decided to focus on this particular trial so early on in his career—particularly because he left town before it even ended to assist with another case in Mississippi. The trial seemed to have more of an impact on Friedman’s life than Marshall’s, and while the movie does address how Friedman went on to become a civil rights advocate following the case, it would have been interesting to see how the outcome of the trial immediately affected his life—especially since he comments during the film that he’s the one who will remain in Connecticut after the verdict is announced while Marshall gets to pack his bags and leave.

Audiences are also left wondering what happened to Hudson and Brown’s characters after the trial. Once the verdict is announced, it seems like the aftermath of the trial doesn’t even matter, with Marshall back on the train to his next case and the characters going their separate ways.

While “Marshall” only scratches the surface of the importance this first African-American Supreme Court Justice played in the civil rights movement, it is still an entertaining courtroom drama. The problem is that the movie plays almost like any other courtroom drama or even an episode of “Law & Order,” and audiences never truly feel the impact this particular trial had on Marshall’s career or civil rights, in general. For a film about such an important figure in American history, “Marshall” falls short of doing this historic icon justice—even if it was only trying to turn the spotlight on a small chapter of it.