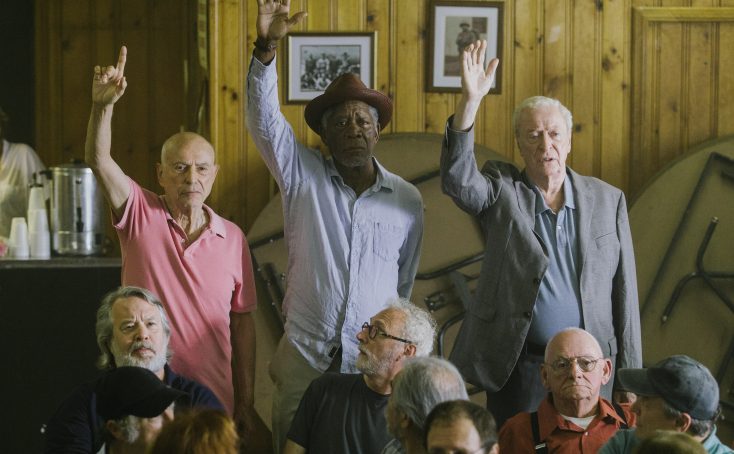 Few things in life are scarier than losing your only source of income. If you’re young, hopefully you’ll find a new job quickly, but if you’re old, retired and your pension suddenly stops, it can be devastating.

Joe (Michael Caine), Willie (Morgan Freeman) and Albert (Alan Arkin) are the protagonists in Warner Bros.’ comedy caper “Going in Style,” who decide to take back what they believe is rightfully theirs. After Joe is caught up in the middle of a heist at his bank, he has the brilliant idea to pull off a robbery of his own. He convinces his two dear old friends and former co-workers to help him knock off the bank—which conveniently happens to be the same bank that absconded with their pension funds—with the plan to take just the amount of money that’s still owed to them so they can keep a roof over their heads and donate anything extra to those in need. Of course, none of these hardworking, respectable retirees have any idea of how to hold up a bank, so after trying to rob a local grocery store of the ingredients to make chicken cordon bleu for dinner one night and failing miserably, they decide they need someone to help coach them on how to pull off the big heist.

Joe turns to his deadbeat former son-in-law Murphy (Peter Serafinowicz), convinced he knows some “lowlifes” who can help them, and soon they’re getting tips from a local pet shop owner (John Ortiz) with a criminal background. With only 20 days until the bank repossesses Joe’s house, this trio of unlikely criminals have to learn quickly if they’re going to pull off the robbery and get away with it. Otherwise, they may spend the remainder of their Golden Years locked up in prison.

Loosely based on the 1979 George Burns classic of the same name, this modern-day remake of “Going in Style” is much more upbeat than its predecessor. Director Zach Braff, best known for his role as J.D. on the hit sitcom “Scrubs,” keeps things fairly light throughout the film’s brisk 96-minute runtime, although the screenplay by Theodore Melfi (“Hidden Figures”) still manages to mix in quite a few heartfelt scenes amidst all the comedy. While the predictable plot keeps audiences from feeling anything too deep since they can sense what’s going to happen a million miles away (especially in regards to one of the film’s final scenes involving Albert), the movie somehow still manages to be both endearing and entertaining thanks to the strong performances of its three leading men.

Caine, Freeman and Arkin are, as always, a joy to watch onscreen, and audiences will have no problem cheering them on even though they’re about to commit a major crime. While their supporting cast doesn’t really get a lot of screen time to shine, it’s always wonderful to see the still-radiant Ann-Margret (who plays Albert’s love interest, Annie, in the film) star in anything these days. Christopher Lloyd also steals the spotlight every chance he gets as Joe, Willie and Albert’s slightly senile friend Milton, even if the role is a bit too reminiscent of Lloyd’s iconic character, Reverend Jim Ignatowski, in “Taxi.”

However, while the film has plenty of laugh-out-loud moments, “Going in Style” doesn’t truly capitalize on its full potential of having three Academy Award-winning octogenarians star in a comedic heist. There’s a great bit involving Arkin, Freeman, a motorized scooter and an “E.T. the Extra-Terrestrial” reference, but viewers can’t help but feel that the movie could have been a lot funnier if the script didn’t restrain its cast so much. Those hoping for the nonstop laughs experienced in films like Ann-Margret’s “Grumpy Old Men” and “Grumpier Old Men” may feel slightly disappointed by the time the end credits roll—especially considering there’s no end-credits bloopers reel. One can only imagine the laughs these three living legends shared on set making the film; hopefully, a gag reel will at least be included on the inevitable Blu-ray release.

Nevertheless, while not the greatest comedy heist to ever hit the big screen, “Going in Style” is still an entertaining romp that follows three characters moviegoers are sure to sympathize with and love. The film may only scratch the surface of the heart and humor it could have had with a stronger script, but the clichéd comedy is still a fun escape audiences of all ages should enjoy.