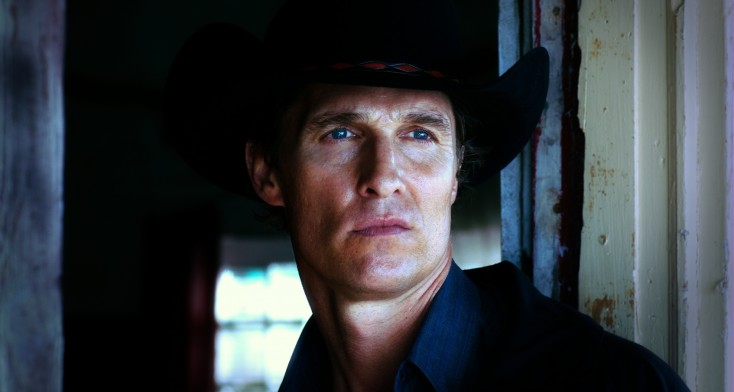 A combination of white trash characters and vicious black humor puts this fitfully funny film noir somewhere between a depraved John Waters farce and a Coen brothers crime caper. In the first scene of this very wrong-side-of-the-tracks tale, 20-something loser Chris Smith (Emile Hirsch) bangs on the door of a house trailer in the rain. When the door opens, he finds himself at eye level with the naked nether regions of his slutty stepmother Sharla Smith (a deliciously trampy Gina Gershon). When Chris turns away in disgust, Sharla blithely excuses her semi-nudity by saying she didn’t know he was the one knocking.

If that kind of crass tongue-in-cheekiness tickles your funnybone, be assured that things only get more no-class naughty from there. The movie’s adults-only NC-17 rating is misleading, because the violence here is no more intense than what’s found in some hard R-rated horror flicks and there is no graphic sex. Still, the movie does feature a hint of incest, bloody beatdowns and a chicken drumstick that makes an unforgettably kinky appearance in a supporting role.

Other members of the Smith family are Chris’ amiably stupid father Ansel (played with entertaining obliviousness by Thomas Haden Church) and his even dumber sister Dottie (a wonderfully ditzy Juno Temple). Chris has the kind of gambling debts that merit broken bones from bikers, but he’s heard that his remarried mother’s will would leave $50,000 to Dottie. He proposes bumping off mom for the money by saying, “Look at it this way: Is she doin’ anybody any good?”

When nobody objects, they contact dirty Dallas cop Joe Cooper (Matthew McConaughey), who will do the deed for $25,000. The problem is that Killer Joe wants the money in advance.

McConaughey is a coolly menacing snake in his role, whistling every “s” and maintaining a forced reasonableness that doesn’t hide his disgust with the simple-minded Smiths. All of them except childish sexpot Dottie, that is. When he suggests taking Dottie as a “retainer” until he gets paid, brother Chris objects — but pragmatic papa Ansel says the experience “might just do her some good.” Joe and Dottie’s first “date” is a bizarre mixture of polite decorum and casual depravity. Tuna casserole, indeed.

Hirsch, whose appearance and animated expressions are so Jack Black-like he could play the actor’s son, gives the scrambling and rationalizing Chris a likable desperation. Church’s thick unexcitability as Ansel and Gershon’s crude but captivating carnality as Sharla make those characters equally fun to watch. The movie’s most effortlessly amusing moment starts with Sharla pulling a thread on Ansel’s suit jacket, with predictable results.

The script by Tracy Letts, adapting his play of the same name, manages to become more outrageous with every act. A brutally savage finale is capped by a hilariously over-the-top last line that’s so cornball it’s perfect.

Letts formerly teamed with “Killer Joe” director William Friedkin on 2006’s unwatchably disturbing paranoid nightmare “Bug.” After that agonizing misfire, this pulp-fiction popcorn flick comes as a pleasant surprise from the pair. Friedkin, best known for helming 1970s classics “The Exorcist” and “The French Connection,” gives the material just the right gritty, low-rent feel. Some dialog scenes are undeniably stagey, but their unnaturalness only enhances the story’s weird brand of hyper-reality.

At one point, Ansel very reasonably asks son Chris, “Why don’t you do us all a big favor and go kill yourself?” The fact that the line comes across as incredibly funny sums up the strange comic forces at work in this darkly lighthearted affair.