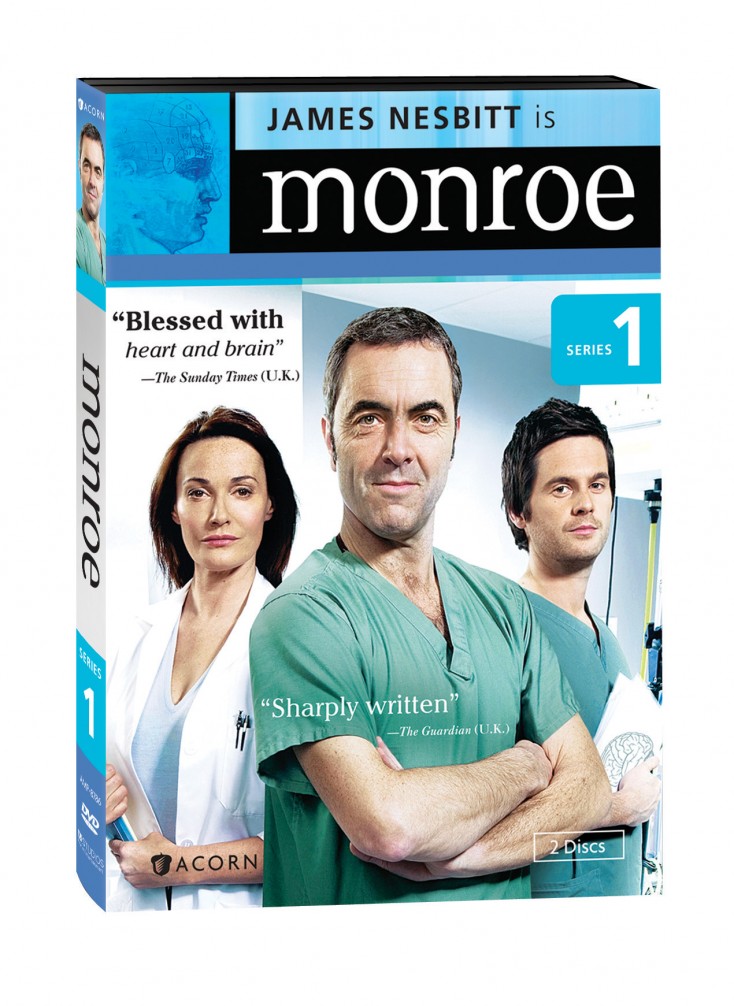 For  “House” fans in withdrawal over that long-running Fox series’ finale, there’s a fix. “Monroe,” a six-part British medical drama that ran on ITV last year, is now available here on DVD.

Like “House,” “Monroe” features a brilliant physician (played by Irish actor James Nesbitt) who, along with his team of eager young interns, figures out how to best treat the steady stream of sick patients, yet he can’t seem to resolve personal issues. Instead of diagnostic medicine as practiced by Gregory House, Monroe confines himself to the mysteries of the brain as the top neurosurgeon at the fictional St. Matthews Hospital.

Nesbitt, who previously starred in the popular British detective drama “Murphy’s Law,” and had a small but pivotal role in Woody Allen’s “Match Point,” plays the character of Gabriel Monroe, a remarkable surgeon with a quick wit and a big heart to match his gigantic ego.

The actor even resembles “House’s” Hugh Laurie a bit right down to the stubbled chin, though he plays Monroe with more warmth and humanity. While he can readily distinguish between a malignant brain tumor and a treatable blood clot, he is clueless about his family’s feelings of neglect, and he is blindsided by his wife’s declaration that she wants a divorce after 20 years of marriage.

“Monroe” is the brainchild of veteran TV and film screenwriter Peter Bowker, who was inspired to create the medical drama after his 4-year-old daughter was diagnosed with a brain tumor, which turned out to be benign. He told the British newspaper the Guardian he wanted to create a medical series like “House.”

“It may be foolish to compare the two but with neurologists, as with ‘House,’ there is this very intense 10 days when you work with them on a case and then you say goodbye,” he told the newspaper before the series premiered in the UK in March 2011.

There are several parallels to House beyond Monroe’s acerbic title character. There’s the competitive support staff, a Cuddy-like co-worker and even a Wilsonish colleague (played by Tom Riley), who serves as Monroe’s loyal but conscientious best friend Dr. Lawrence Shepherd, an anesthesiologist.

In the series’ first episode, audiences are introduced to Monroe, his team of attractive support staff, his colleagues, including brusque heart surgeon Jenny Bremner (Sarah Parish), whose standoffish personality is more like House than Monroe’s, his wife and teenage son.

Monroe has to help a patient decide whether to undergo a surgery that could save her life but comes with risks of paralysis, losing her ability to speak and even recognizing her husband. The episode also introduces viewers to Monroe’s family—his beautiful wife Anna (Susan Lynch) and sensitive son Nick (Perry Millward). After dropping off their philosophy-studying youngster at college, Anna drops her bombshell on Monroe and moves out of their spacious suburban home, leaving him all alone. Back at the hospital, the distraught surgeon discovers certain truths about marital relationships as he treats the young woman with the brain tumor and convinces her fearful husband to stick by her.

In subsequent episodes, Monroe continues to deal with his relationship problems while trying to save other sick patients, including an Afghanistan war vet suffering from survivor guilt and a young girl with little chance of recovering from a car accident.

Unfortunately, there are no special bonus features on this two-disc DVD, which is unrated, and available through Acorn Media at $39.99.

The good news is ITV has ordered a second season (“series,” as it is known in Britain), which currently is in production in Leeds, England. Perhaps future DVD collections will offer bonus materials. For now, though, viewers will have to be satisfied with simply enjoying these six episodes that are each approximately 45 minutes in length.