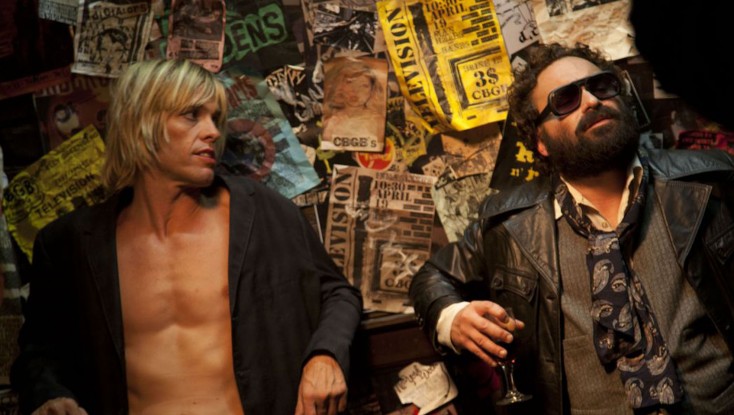 The lifeless, unconvincing and unfocused “CBGB” is the utter antithesis of everything it should have celebrated. Named for the iconic Bowery club that served as a launching pad for numerous punk and new wave bands in the 1970s, the movie has none of the rebellious energy, anarchic style, DIY ambition or sense of danger that defined the music and its milieu.

Worst of all, every song is lip-synced to prerecorded studio versions by the original artists that actors are portraying, undercutting any rough-and-raw illusions. It makes no sense that new groups just getting their start and sometimes playing live for the first time already would sound proficient and studio-polished. There’s also the fact that the acoustics of a noisy dive bar would sound absolutely nothing like the controlled ambience of a recording studio.

CBGB founder Hilly Kristal (Alan Rickman) is portrayed as a monotonously boring and barely awake burnout. This shuffling, dead-eyed, middle-aged mumbler borrows money from his mother to start a club intended to showcase country, bluegrass and blues (CBGB) artists. He changes his tune when he can’t attract those acts to his downscale and derelict-strewn digs, opening his doors to unsigned next-generation rock groups such as Television, The Ramones and Talking Heads.

Unfortunately, the meandering screenplay (by director Randall Miller and Jody Savin) spends far less time on the musicians than on the bad-sitcom-ready cast of would-be colorful characters who help Kristal run his literally crappy club. (His dog has what is supposed to be an amusing habit of taking large dumps on the floor.)

Daughter Lisa (Ashley Greene) is the sensibly budget-minded yin to Kristal’s perilously free-spending yang. Partner Merv Ferguson (Donal Logue) constantly wears a yellow plastic hard hat. Junkie Idaho (Freddy Rodriguez) is the club’s muttering, rat-feeding cook who drops cigarette ashes in the chili. And a biker gang led by a bearded chess-playing badass named Leslie (Ryan Hurst) is gracious enough to stop hanging around the joint when they realize they are scaring away the hipster trade.

Instead of embracing the edgy, amateurish aesthetic of the era, the filmmakers sometimes seem determined to make this cheap indie flick inappropriately slick. Animated comic-book style panels used between scenes look enough like cheesy reality-TV transitions to seem completely out of place. (They are inspired by artwork from the period’s Punk magazine, about which who cares.) Hilly’s sentimental solo trip back to his former New Jersey childhood farm is corny and unconvincing. Hilly’s deadpan mother is portrayed by Estelle Harris, aka George Costanza’s mom from “Seinfeld.”

This lethargic dud isn’t as aggressively unwatchable as last year’s similarly club-based “Rock of Ages,” in which Akerman also had the misfortune to appear. But the two really deserve to show up on a not-bad-enough-to-be-good double bill.

A note at the end of the closing credits admits that Iggy Pop (Taylor Hawkins), who is shown storming the CBGB stage to duet with Debbie Harry on “I Wanna Be Your Dog,” never actually performed at the club. This shameless revelation falls in the category of “all you really need to know” when it comes to making your viewing decision.