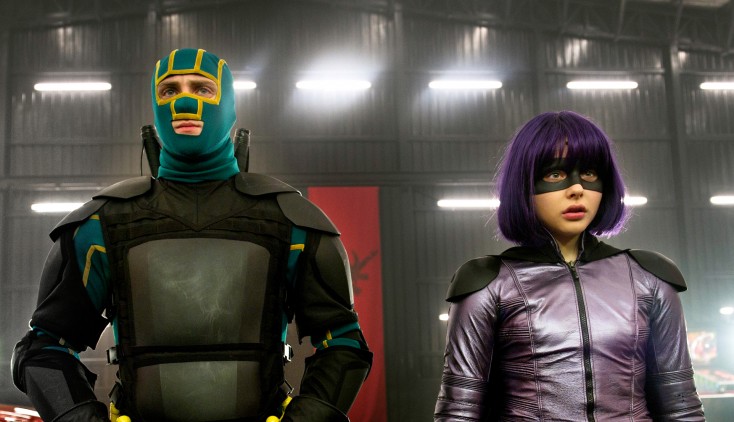 (***NOTE TO EDITORS: There is a character called Night Bitch that is mentioned twice in this article. You may want to asterisk it. Also, the title of the movie itself has the word ass in it.***)

More fun than the dreadful “Iron Man 3,” the dull “Man of Steel” or the dismal “The Dark Knight Rises,” the much smaller-scale “Kick-Ass 2” is an odd mixture of affectionate fanboy silliness, graphic ultra-violence, extremely black humor and amped-up mean-girls melodrama. Even if it’s not as super as 2010’s first “Kick-Ass,” this R-rated farce is the most enjoyable comic-book flick since last year’s “The Avengers.”

That doesn’t mean it’s perfect. The main hurdle this sequel has to overcome is familiarity. Even though conventional superheroes thrive on recognition and repetition, there’s a bit of “heard this joke before” when it comes to watching a no-special-powers comics fan put on a goofy costume to combat the forces of evil.

Also, star Aaron Taylor-Johnson has beefed up so much in real life that he now looks like someone who would have no trouble whatsoever kicking ass, which undercuts the movie’s geeky underdog premise. Age 22 when the film was shot, he also is too old to be playing a high-school nerd.

Similarly, Kick-Ass’s gleefully lethal companion Hit-Girl (aka 15-year-old Mindy Macready), hilariously played by Chloe Grace Moretz as a tiny profanity-spewing tween the first time around, has grown up enough that she no longer serves as an instant visual gag every time she appears onscreen.

Following high body count events that included the murder of her superhero single father in the first installment, Mindy has been cutting class to train Kick-Ass alter ego Dave Lizewski (Taylor-Johnson) and continue her crimefighting career. When she promises her new guardian Marcus (Morris Chestnut) that she will stop, she discovers an all new band of enemies at school in the form of a two-faced clique of popular girls.

The filmmakers keep the franchise’s tongue-in-cheek combination of slapstick and savagery that seemed so snarkily subversive three years ago fresh by adding considerably more costumed heroes and villains here. Kick-Ass joins a motley and amusing band of fellow average-Joe wannabes led by Jim Carrey’s Colonel Stars & Stripes to form a team called Justice Forever. (Carrey’s deadpan moralistic character is an amalgam of the duo Colonel Stars and Lieutenant Stripes from the “Kick-Ass 2” comic.)

Carrey is almost unrecognizably rugged as the born-again ex-mobster, who has trained his dog Eisenhower to bite baddies below the belt. Other teammates include Donald Faison as the likeably good-natured Dr. Gravity and Lindy Booth as Kick-Ass’ new love interest Night Bitch.

Christopher Mintz-Plasse, who played the desperately needy son of a nasty mob boss in “Kick-Ass,” has given up his former Red Mist identity to become a supervillain with a name so obscenely outrageous it may be the movie’s best joke, and a costume incorporating his mother’s patent leather bondage outfit. Wanting murderous revenge on Kick-Ass for killing his father, he gathers a group of masked mercenaries led by the ridiculously badass Mother Russia (Olga Kurkulina), who stages a one-woman suburban massacre with weapons that include a propane tank and a lawnmower.

Combining elements from the two definitely not-for-kids comic-book series “Kick-Ass 2” and “Hit-Girl” by the characters’ creators Mark Millar and John Romita Jr., the screenplay by director Jeff Wadlow takes liberties that (believe it or not) actually soften many scenes from the printed version. That’s too bad. When being transgressively audacious is one of the main power points of a project, toning down its most shockingly over-the-top aspects (such as the far nastier fates that befall Colonel Stars and a female character in the comics) sort of defeats the purpose.

On the positive side, the movie replaces the ending of the “Kick-Ass 2” comics series with a finale that isn’t a frustrating cliffhanger. (And be sure to stay until the end credits are over for a bonus scene.) The movie also wins points for being a rare comic-book movie that’s not in 3D. Now that’s super!