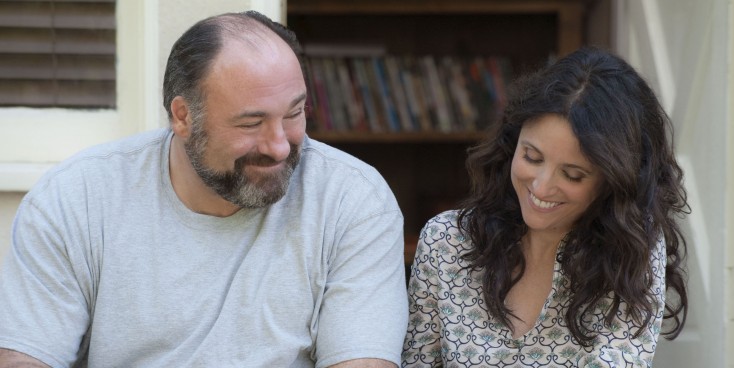 The endearingly adorable Julia Louis-Dreyfus appears in and steals every scene in the sweet second-time-around romantic comedy “Enough Said.” As single-mom masseuse Eva, she begins a tentative but hopeful relationship with an unassuming divorced dad named Albert (James Gandolfini, in one of the late actor’s final roles). Both have former spouses they can’t stand and only-child daughters who will be leaving Los Angeles to attend East Coast colleges.

Writer/director Nicole Holofcener (“Lovely and Amazing,” Walking and Talking”) has a refreshing talent for crafting conversations that are realistically amusing rather than sitcom-style obnoxious, and creating characters who are believably interesting instead of cartoonishly quirky. She also manages to include some genuine heart in this otherwise light affair without being disingenuously gooey about it. Holofcener’s deft touch with clever but credible dialog and her ability to let emotional scenes play out with a subtle form of un-Hollywood-like grace make her the anti-Nancy Meyers.

Some nice getting-to-know-you moments include Albert’s awkward attempt to give Eva a first-date kiss, Eva’s accidental first glimpse of Albert’s manhood and a strangely charming mutual dental examination. Their best exchange paradoxically comes after an evening of friendly banter. “I’m tired of being funny,” Eva says while being spooned in bed. “Me, too,” Albert replies.

Even a scene as simple as one in which Eva sits stretched out on the back steps of Albert’s house, pulling a few weeds while having a friendly chat, is fun to watch precisely because it doesn’t try too hard.

That’s why a major plot contrivance involving an inconvenient coincidence (no spoilers here) comes as a disappointment. Until that moment, Eva’s interactions with her daughter, her friends and Albert are so satisfyingly sufficient that the unlikely complication feels inorganic and gimmicky. After that development, “Enough Said” becomes an exercise in waiting for the honesty to hit the fan, even though it’s hard to believe that Eva wouldn’t reveal the truth to everyone involved much sooner.

The fact that this pretty significant flaw isn’t enough to ruin the movie is a testament to how much else about it is a pure delight, including its standout cast. Louis-Dreyfus is so low-key funny, quietly vulnerable and convincingly emotional that the former “Seinfeld” and current “Veep” TV star should garner some big-screen award nominations. Former “The Sopranos” mob boss Gandolfini turns out to be unexpectedly perfect as Eva’s sensitively soft-hearted teddy bear of a boyfriend. When he and Eva are annoyed by the loud music at a restaurant, he makes the pronouncement “I find that I don’t like younger people” sound simultaneously sincere and a little regretful.

A Taylor Momsen name drop is just dated enough to seem obscurely hip, and Eva’s bewildered but resigned observation that teenage threesomes apparently are “what they’re doing these days” is a novel way to sum up the current generation gap.

With all of those things going for it, the movie easily overcomes its strained central plot device. As Marianne says about appreciating poetry, “Let it wash over you, don’t try to understand it.” Enough said.