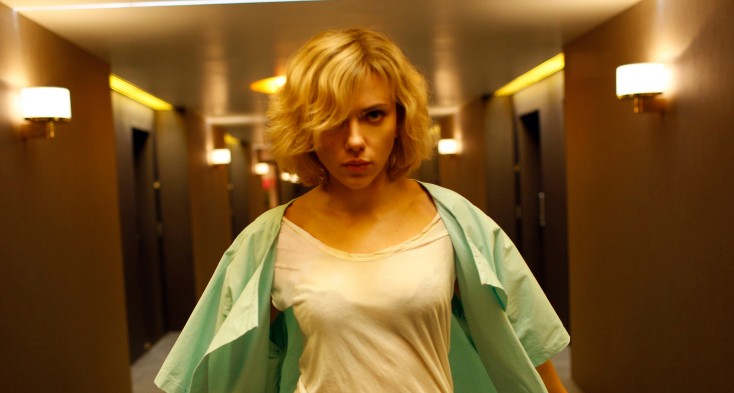 As the mentally-enhanced and mega-powerful main character of director/writer Luc Besson’s outrageously entertaining “Lucy,” Scarlett Johansson makes the badass Black Widow character she plays in Marvel’s superhero movies look positively tame. Her thrilling transition from helplessly terrified victim to a goddess-like master of firearms, stunt driving, time and space is a trippy mashup of “Altered States,” “2001: A Space Odyssey” and “The Matrix,” with a relentless gang of murderous mobsters thrown in for spice.

The tension starts as soon as we meet the dressed-like-a-slob but sexy Lucy, who is manipulated by her sleazy-Bono-looking boyfriend into delivering a mysterious briefcase to a bloody-handed stranger in a Taipei hotel. Next thing you know, she’s waking up with a bag full of drugs sewn into her abdomen and is handed a passport and a plane ticket. That’s the brutal gang’s preferred method of smuggling their new and extremely valuable street drug into other countries. If Lucy or her fellow cruelly conscripted couriers try anything funny, they are assured that every member of their families will be killed.

Things deviate from plan when Lucy is beaten so badly by lower-level thugs that the bag breaks, releasing a huge dose of the drug into her system. Because it’s a synthesized form of the hormone that causes fetuses to start developing, the stuff sends her into a kind of evolutionary overdrive by letting her access more of her brain. Suddenly fast, smart and lethal, she’s like a voluptuous and vengeance-seeking supercomputer in danger of burning itself out in less than a day.

The movie intercuts Lucy’s increasingly over-the-top ordeals with a presentation by intelligence researcher Professor Norman (the always authoritative Morgan Freeman), in which he speculates about what humans could accomplish if they were able to use more of their cerebral capacity. Starting with the premise that we currently access only 10 percent of our potential, he hypothesizes that upping that number could mean gaining more control over our own bodies, other people and possibly matter itself.

Freeman’s folksy lecture serves as a cool contrast to Lucy’s casual acts of violence, which include walking into a hospital operating room, shooting the patient on the table and then demanding that horrified doctors remove the ruptured drug bag from her body. The fact that she’s conscious and tearfully talking about her newly expanded consciousness to her mother on the phone during the procedure is a good example of how the movie goes gleefully over the top with both emotions and action. Subtle, it’s not.

Likewise, the crudely single-minded mobsters who come after Lucy with guns a-blazin’ offer a lowbrow counterpoint to headier SF-fantasy scenes in which Lucy mindreads, employs telekinesis and manipulates cell signals that she sees as bands of color rising skyward from everyone’s phone.

Attempting to research her condition, Lucy discovers Norman’s work online. She races to meet the professor in hopes of finding a way to survive, or at least to impart some of her next-level knowledge about life, the universe and everything before she literally falls apart.

The movie essentially is a one-woman show for the ripely irresistible force-of-nature Johansson, with Freeman along as the equivalent of a series of helpfully explanatory footnotes. Other supporting characters include Amr Waked as a flabbergasted Parisian police lieutenant who knows enough not to get in Lucy’s way, and Min-sik Choi as the thwarted drug overlord who wants to put a bullet in her head.

Besson successfully uses clever cutaways, interesting montages, screen-filling updates on Lucy’s rising percentage of available brainpower and stunningly elaborate special effects, especially in a dazzling final-act showpiece that’s like “Cosmos” on crack. The movie’s mix of the vulgar with the sublime works surprisingly well, with enough headlong energy to excuse plot quibbles such as why Lucy doesn’t kill the very deserving drug kingpin when she first gets the chance.

She never puts on a costume, unless a white T-shirt over a black bra counts, but Lucy may be the most intriguing action hero of the year.