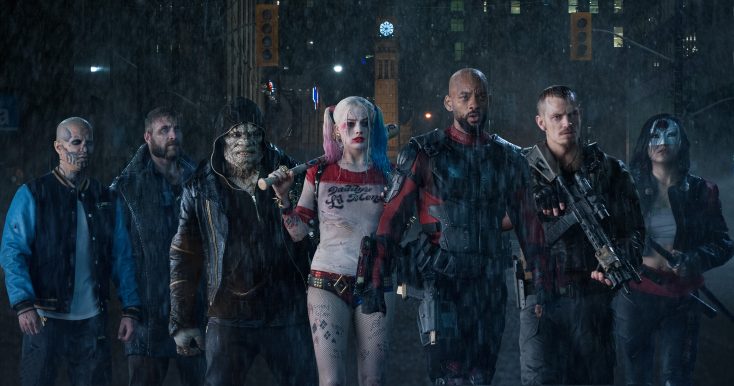 It’s not just bad. It’s “Howard the Duck” bad, an embarrassingly overbaked abomination that’s what the enjoyably irreverent farce “Deadpool” may have been like if that movie had done absolutely everything wrong.

It’s also at least four-in-a-row bad for Warner Bros. DC Comics movies (or many more in a row, if you weren’t a fan of Christopher Nolan’s joylessly pompous “The Dark Knight”). “The Dark Knight Rises” was a disastrously dour conclusion to the Nolan Batman trilogy, Zack Snyder’s “Man of Steel” misinterpreted Superman even more depressingly than Bryan Singer’s “Superman Returns” did; and the less said about Snyder’s unwatchably dull “Batman v Superman: Dawn of Justice” the better.

It’s as if the studio has a pathologically self-destructive compulsion to make DC Comics movies so dismally unpleasant and gray-brown ugly that they are the aggressive opposite of mighty Marvel’s more colorful fun rides. (While “Howard the Duck” was based on a Marvel comic, the movie was made long before Marvel Studios came into existence and perfected the form.)

“Suicide Squad” writer-director David Ayer seems set on subverting everything that makes good comic-book flicks work. It’s hard to imagine a worse mismatch for this kind of material than Ayer, who previously directed the excellent police drama “End of Watch” and the WW2 period piece “Fury.”

The movie introduces far too many characters and fails to make us care about any of them, even with shamelessly maudlin “Daddy, don’t do it” and dead-kid references. The screenplay is a mess of multiple flashbacks that culminate in the usual deafening maelstrom of all-out destruction…but not before a mind-bogglingly stupid detour for a chatty bar scene that destroys the last-act momentum.

The insultingly dumb plot may have been excusable in a consistently cartoonish comedy, but not set against a gritty backdrop of brutally hyperviolent mass homicides in a world where Superman still is dead and sidewalk vendors sell dignified black “Remember” T-shirts marking that event as if they are solemn 9/11 commemoratives.

Sadistic government hard*** Amanda Waller (the relentlessly humorless Viola Davis) assembles a worst-of-the-worst team of more-or-less super criminals, ostensibly as a deterrent “in case the next Superman doesn’t share our values.” They are re-purposed to stage a makes-no-sense urban rescue mission (their target requires no actual assistance in simply reaching the roof to get on a helicopter) and then confront a city-destroying supervillain (who wields planet-destroying power, yet takes the time to engage in a punch-up fisticuffs brawl with the squad instead of immediately destroying them).

Why Waller would think that a brain-damaged babydoll sex lure like Harley Quinn (Margot Robbie in clown tramp makeup) belongs in the squad is incomprehensible. Harley’s only weapons are a handgun, a baseball bat and the ability to wear ridiculously skimpy panties that she apparently acquired from the little girls section of a party supply store.

As high-priced hitman Deadshot, Will Smith ricochets between sappy-sensitive father and mercenary-minded murderer without being convincing as either. His daddy-daughter scenes make it impossible to believe that he is a remorselessly cold-blooded killer, which is kind of supposed to be the point here, no?

The rest of the squad members are reluctant firestarter El Diablo (Jay Hernandez with mucho facial tattoos), who can’t get over torching his family; lizard-skinned Killer Croc (Adewale Akinnuoye-Agbaje), who isn’t blessed with a backstory; Captain Boomerang (Jai Courtney), a down-under diamond thief; and sword-wielding Katana (Karen Fukuhara), a non-criminal brought along to help keep the others in line. The bad guys are implanted with explosives to kill them if they go rogue. The fact that all but one of them don’t try means they aren’t entirely crazy, which undercuts their viciousness somewhat.

The team is led by no-nonsense miltary Captain Rick Flag (Joel Kinnaman), who has a personal stake in their mission. Potentially world-destroying villain the Enchantress is the evil alter ego of Flag’s girlfriend Dr. June Moone (a wild-eyed and spooky Cara Delevingne). What’s sad is that the basics of the Enchantress subplot may have made for a decent solo outing, because that character is the most interesting one here by far.

Jared Leto plays Harley Quinn’s lethal lover the Joker, who is intent on springing her from confinement, as a more icy and dandified sociopath than Heath Ledger’s disheveled psycho or Jack Nicholson’s hammy madman. Although he cuts an impressive figure in more than one iconic outfit from the comics, he and many of the other cast members suffer from “Gotham” syndrome. Like nearly everyone in that not-quite-right DC Comics TV series, most of the characters here come off like second-rate stand-ins for what should be better versions of themselves. That also applies to Ben Affleck’s Batman/Bruce Wayne, who makes a couple of brief cameos that confirm how wrong he is for the role.

Part of “Suicide Squad” wants to be a deadlier-stakes “The Dirty Dozen,” the rest wants to be a “Deadpool”-derivative comedy, but it only ends up being more disappointing DC dreck.