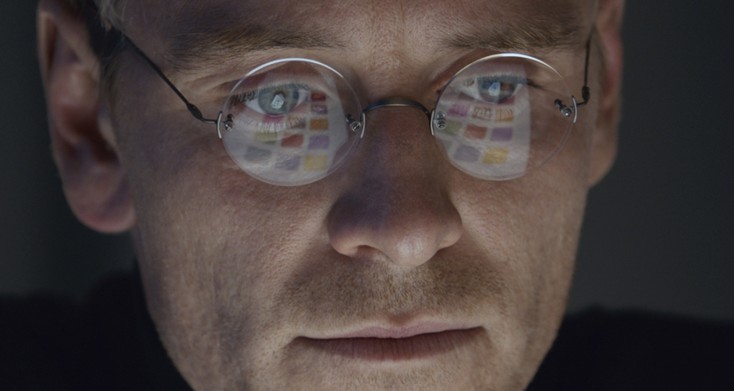 The ingenious “Steve Jobs” updates the standard biopic operating system by stripping its subject’s life story down to backstage encounters at only three crucial events (with a few flashbacks): the 1984 launch of the Macintosh computer, the 1988 debut of Jobs’ NeXT company and the 1998 arrival of the iMac.

The fact that the same group of very meaningful cast members from Jobs’ personal and professional lives shows up for all three of those occasions to praise, berate, comfort or condemn him is as unlikely as their perfectly honed pronouncements, which often play like a series of dazzling witticisms broken up by the occasional meaningful stare. Also, Michael Fassbender bears no resemblance whatsoever to Jobs beyond his wardrobe, and the whole affair comes across as much more stage play than cinematic.

Somehow, though, this unorthodox approach turns out to be surprisingly effective. Fassbender conveys a fascinating mixture of arrogant self-righteousness, cruel pettiness and credible remorse as Jobs, even if he wouldn’t win any look-alike contests. Director Danny Boyle keeps things moving in the limited confines of the three main venues, with only brief glimpses of back-story locations including the garage where the seeds of Apple were planted and the boardroom where things went rotten.

Aaron Sorkin’s screenplay (based on the “Steve Jobs” print biography by Walter Isaacson) makes nearly everyone present sound as casually clever and cutting as his version of Mark Zuckerberg in “The Social Network,” but there are worse flaws a movie can possess than a surfeit of quotable bons mots. Rationalizing his own misanthropic perfectionist attitude, Jobs notes that, “God sent his son on a suicide mission, but we like him anyway, because he made trees.” He later compares himself to Julius Caesar, with what turns out to be good reason.

Jobs, who couldn’t write computer code and wasn’t an engineer, describes his function as a conductor who “plays the orchestra.” Boyle plays up that metaphor with a score that swells with intensity during some of his harried main character’s harangues.

Although each of the three days covered in the movie should mark moments of triumph for Jobs, each turns into a series of “stop and catch Hell” recriminations, to the point where it’s sometimes hard not to wonder if all this drama might be happening only in his guilt-ridden mind. Chrisann Brennan (Katherine Waterston) chastises Jobs for denying he is the father of their daughter Lisa, and for providing her with so little financial support that she has signed up for welfare. Apple co-founder Steve Wozniak (Seth Rogen) wants Jobs to share more credit with him and to acknowledge the efforts of company employees. Apple CEO John Sculley (Jeff Daniels) undercuts him, longtime right-hand “work wife” Joanna Hoffman (Kate Winslet, with an Eastern European accent that comes and goes) gets fed up with his shortcomings as a father, and a resentful Lisa (played as a 19-year-old by Perla Haney-Jardine) insults Jobs’ beloved iMac by saying it “looks like Judy Jetson’s Easy-Bake Oven.”

The cast’s weak links are Rogen as “Woz,” who is too slacker goofy as Jobs’ ineffective Jiminy Cricket, and Michael Stuhlbarg as Macintosh software designer Andy Hertzfeld, whose overdone stereotypical nerdishness seems more suited to TV’s “The Big Bang Theory” than to the big screen.

This is Fassbender’s show all the way, however, and his remarkable portrayal of Jobs as an obnoxious, damaged, self-aggrandizing huckster who is more than a bit of a bastard is as entertaining as it is award-worthy.