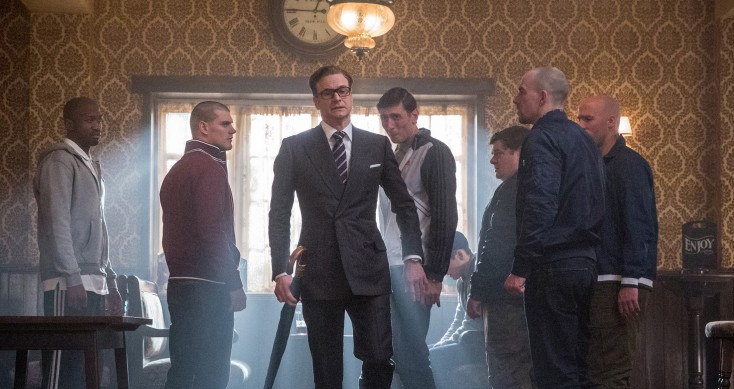 This so-so sendup of silly ’70s spy movies has enough fun with the genre to make up for its logic flaws, an inconsistent tone and many lost-in-adaptation lapses. “Kingsman: The Secret Service” is not as zippy, clever or exciting as it probably should have been, especially considering that the outrageously over-the-top flicks it lampoons (greetings, Mr. Bond) were practically self-parodies already. On the other hand, this very tongue-in-cheek tale is edgier, smarter and considerably more ultra-violent than the “Agent Cody Banks” flicks, which counts for something.

Based on a graphic novel created by the movie’s director Matthew Vaughn and superstar comics writer Mark Millar, the movie depicts the unlikely transformation of British and boyish lower class underachiever Gary “Eggsy” Unwin (Taron Egerton) into a world-saving secret agent under the tutelage of a sophisticated and very undercover operative codenamed Galahad (Colin Firth). Spirited away to an elaborately high-tech countryside manor to train in competition with other Kingsman-organization candidates, Eggsy is mocked for his lack of polish and pedigree by posh and petty male rivals, but befriends a sympathetic and spunky wannabe named Roxy (Sophie Cookson).

Samuel L. Jackson plays the piece’s de rigueur megalomaniacal supervillain with lisping scenery-devouring relish as Richmond Valentine, a bonkers billionaire who plans to wipe out most of humanity by means of modified and mass-distributed cell phone SIM cards. His lovely and lethal henchwoman is the bangs-wearing beauty Gazelle (Sofia Boutella), a double amputee with razor-sharp blades below her knees that come in frighteningly handy for landing kicks that really count. Aptly codenamed Arthur (Michael Caine) is head Kingsman, and Mark Strong appears as the group’s tech-master Merlin.

Many of the changes the movie makes to the storyline of the much better graphic novel are baffling and misguided, the worst offenders coming at the beginning and end of the film. The comic opens with a very funny scene in which the real-life Mark Hamill has been kidnapped because the book’s supervillain (a 23-year-old, white and decidedly non-Samuel L. Jackson-like fanboy nerd) wants the stars of his favorite science-fiction movies to survive the coming slaughter. Hamill is present in the movie version, but in the role of a scientist, which entirely defeats the point of him being there. Likewise, the graphic novel’s clever feel-good climax has been scrapped for a wrap-up that is its exact opposite, substituting unamusingly brutal menace for lighthearted charm.

A similar example of the movie replacing a witty (although admittedly dark, in this case) scene with one that’s merely gruesome: In the print version, the bad guy tests his make-everyone-murderous technology on beamingly happy brides and grooms at a mass wedding on a Hawaiian beach. The movie shifts that action to a Kentucky church, where a racist and hate-filled preacher is sermonizing to a congregation that’s already angry and fired up, subverting the impact of turning the crowd vicious by remote control.

In the same way that “Hairspray” and “The Producers” went from being movies to getting reworked as Broadway musicals and then being remade into movies of those musicals, “Kingsman: The Secret Service” departs so much from its source material that it could be adapted back into comics form without a whole lot of overlap with the original.

On the positive side, the always enjoyable Firth is surprisingly good at maintaining wryly cool Mr. Steed-like aplomb while single-handedly dispatching a gang of thugs in a pub. Of course, he does possess a bulletproof umbrella, a high-voltage signet ring and a few other Q-level gadgets, but still. His ridiculously impressive participation in the jaw-droppingly hyperviolent church melee (amusingly accompanied by Lynyrd Skynrd’s “Free Bird”) is convincing enough to qualify him for a second career in chop-socky martial arts flicks.

The movie misses an opportunity to get laughs by featuring cameos by real-life celebrities during its storm-the-fortress finale, although perhaps Vaughn and co-screenwriter Jane Goldman (who also collaborated on the movie version of Millar’s “Kick-Ass” comics) thought that might seem a bit too “Men in Black.” The fate of a host of selfishly privileged one-percenters is satisfyingly appropriate, however, and what happens to the movie’s apparent President Obama could get the filmmakers a visit from the real secret service.

There’s a hilariously filthy line of dialog near the end of the movie that’s either completely inappropriate or the kind of thing you’ll wish there had been more of throughout the rest of the screenplay, depending on your sense of humor. But if the filmmakers couldn’t be more faithful to the comic, it’s too bad that more of their additions weren’t this goofily irreverent, as opposed to “shoot the dog” grim.