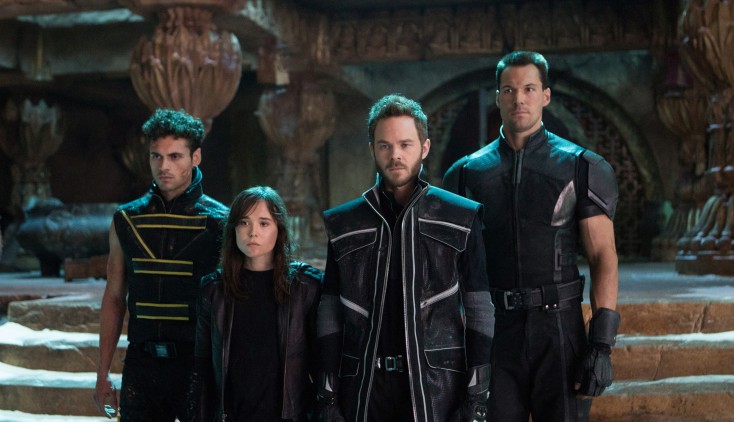 The action-packed and outrageously entertaining “X-Men: Days of Future Past” is right up there with Marvel’s “The Avengers” as one of the most thoroughly enjoyable superhero movies ever made. With a more interesting plot and more well-developed main characters than any previous installment of the X-Men series, it also delivers the kind of spectacular special-effects set pieces that demand to be seen on the biggest screen possible.

Returning cast members include Hugh Jackman in a franchise-best performance as Logan, aka the indestructible claws-sprouting Wolverine, and Jennifer Lawrence as the blue-skinned shape-shifter Raven/Mystique. X-Men leader Professor Charles Xavier is played with the solemn steadfastness of maturity by Patrick Stewart and the despairing hopelessness of youth by James McAvoy. Ian McKellen embodies the older version of Xavier’s former nemesis Erik Lehnsherr/Magneto, while Michael Fassbender plays Magneto’s more human-hatingly nasty younger self with intimidating assurance.

A standout among the fresh faces is the literally faster-than-a-speeding-bullet teenager Peter Maximoff (an amusingly insolent Evan Peters), known in the Marvel Comics universe as Quicksilver but never called that here. A scene shot from his viewpoint as he moves impossibly fast around a room full of adversaries at what seems like a leisurely no-hurry pace is such a crowd-pleaser that Fox execs would be crazy not to rush a solo spinoff movie devoted to the character into production ASAP.

Bryan Singer, director of 2000’s “X-Men” and 2003’s “X-Men 2” (but not 2006’s “X-Men: The Last Stand” or 2011’s “X-Men: First Class”) makes a triumphant return to the franchise by managing to keep irony at bay in a flick that boils down to super-powered mutants fighting each other and battling killer robots. Anybody could make this kind of stuff look silly, but getting audiences emotionally invested in the drama of a story requiring this much suspension of disbelief takes a special kind of genius.

The clever screenplay by “X-Men: The Last Stand” writer Simon Kinberg, based on a story by him and “X-Men: First Class” writers Jane Goldman and Matthew Vaughn, requires Logan’s consciousness to time-travel from a frighteningly dystopian and murderous future back to 1973. That’s where he must unite bitter enemies Xavier and Magneto to prevent Mystique from committing an assassination that will result in the funding of a government program to eradicate all mutants.

Fanatics may quibble over some continuity lapses with previous installments, because the movie works best if it’s regarded simply as a sequel to “X-Men: First Class.” Also, time-travel stories rarely hold up to a lot of thought and this one is no exception, even if the lack of concern with logic does make for a fun ride.

Marvel maniacs also will note that the screenplay is wildly unfaithful to the two 1981 comics written by Chris Claremont that inspired it. Most notably, it’s not Logan but X-Man Kitty Pryde (Ellen Page) who took the time trip in the comic books. And instead of that journey ending in 1980, when Mystique intends to assassinate a presidential candidate in the comics, the film sends Logan to Nixon-era 1973, where the killing of a different victim will take place at the Paris peace talks to end the Vietnam war.

Literally every change the movie makes—which also includes injecting Magneto into the earlier events while deleting Mystique’s fellow members of the charmingly named Brotherhood of Evil Mutants—improves the original story immensely. (Sorry, Blob fans.) On the good-guys side, the comics script put 1980 Colossus, Storm, Angel, Nightcrawler and Kitty up against Mystique and company. All five of those X-Men are replaced in the film’s 1973 segment by Professor X, Hank McCoy/Beast (Nicholas Hoult), Logan and Magneto.

The 1970s setting provides opportunities for visual gags of the lava lamp, waterbed and Pong variety, but the film resists going completely “Anchorman” overboard. In human guise, Mystique rocks outfits like a button-front halter and big-brimmed bippity boppity hat when not impersonating men of both average and Peter Dinklage proportions, which obviously is quite a talent.

The best alteration of the comic-book source material is the film’s far scarier-looking and more viciously stabby version of the mutant-hunting Sentinel robots, now enhanced with technology that lets them adapt to defend themselves against any mutant’s powers. Their relentless attacks against the future versions of the X-Men are genuinely horrifying. So is the film’s upgrade of their mission, which has gone global and threatens to eradicate all humanity. (The doomsday scenario in the comics was that other nations—including Canada!—would wage nuclear war against America if the Sentinels were deployed beyond US borders, which was about to happen.)

Although “X-Men: Days of Future Past” may sound like a crowded and convoluted affair that only fanboys could appreciate, it is directed, written and acted with such skill that even mutant-movie newbies shouldn’t get lost. Easily besting this year’s earlier comic-book flicks “Captain America: The Winter Soldier” and “The Amazing Spider-Man 2,” “X-Men: Days of Future Past” could be the summer’s most satisfying blockbuster.