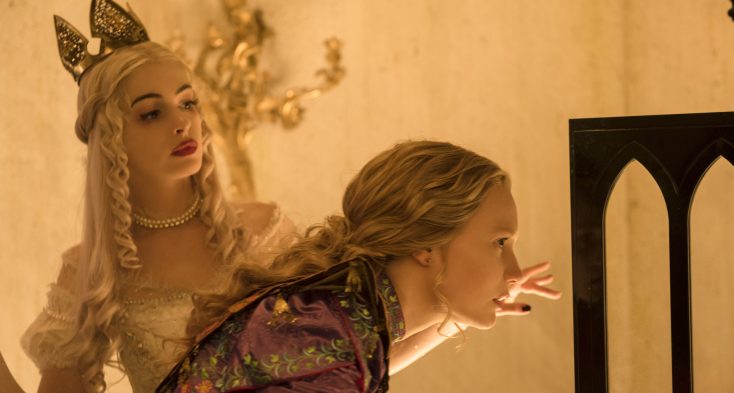 It’s hard to believe six years have passed since Disney reimagined its beloved animated tale “Alice in Wonderland” as a live-action feature film. Since then, a couple of other Disney animated classics have gotten the live-action adaptation treatment, including “Cinderella” and “The Jungle Book.” While later adaptations have been more critically praised, Disney decided to go back to the film that arguably started this new wave of live-action retellings by bringing Lewis Carroll’s sequel to “Alice’s Adventures in Wonderland,” “Alice Through the Looking Glass,” to the big screen last May.

Featuring the original 2010 live-action “Alice in Wonderland” cast, the film follows a now grown-up Alice (Mia Wasikowska) as she returns to Wonderland to save her dear friend Hatter (Johnny Depp), who has fallen into a deep depression thinking that the family he once lost is somehow still alive. Alice must take on Time himself (played by the always brilliant Sacha Baron Cohen) to find out the truth about Hatter’s family. In the process of her quest, she uncovers what really happened between Mirana (Anne Hathaway) and Iracebeth (Helena Bonham Carter) when they were kids—and the white lie that gave birth to Iracebeth’s tyrannical Red Queen.

Ironically, for a film about how precious time is, “Alice Through the Looking Glass” takes a while to get to the point. While Alice unearths some interesting revelations about some beloved characters, the film itself is far from Disney’s most interesting live-action fairy tale. The acting is great and the visuals are wonderful, but the screenplay by Linda Woolverton (“Alice in Wonderland,” “Maleficent”) takes too long to grab viewers’ interest—especially younger viewers who have a limited attention span to begin with. Of course, the 2010 version of “Alice in Wonderland” is probably Disney’s weakest live-action adaption fairy tale to date, so it’s hard to expect “Alice Through the Looking Glass” to compete with the near-perfect “Cinderella” or “The Jungle Book.” Although the film is enjoyable, it’s simply not necessarily rewatchable.

The bonus features on the Blu-ray/DVD Combo Pack with Digital HD (Walt Disney Studios Home Entertainment, MSRP: $39.99) are fitting for the film they’re attached to: interesting, but not thoroughly entertaining. Probably the best extra of the bunch is the “Behind the Looking Glass,” which uses the film’s famed chronosphere, which allows the person who possesses it the ability to travel the Ocean of Time to the past, to take a look back at the making of the film. Featuring interviews from the cast and crew, viewers will discover how the “Alice Through the Looking Glass” novel “didn’t have much of a plot” (at least according to Helena Bonham Carter) and how the filmmakers turned the sequel into a prequel of sorts by going back in time to show Wonderland’s classic characters when they were younger. The eight-minute extra also goes over “Alice in Wonderland’s” timeline, from the book’s original release to when Disney released the animated and live-action adaptations, and discusses how this new cinematic chapter isn’t so much good versus evil like the first story, but much more nuanced in showing who is right and who is wrong. As Anne Hathaway says, it’s really “a family drama set against a cartoon background.”

Two additional featurettes, “A Stitch in Time: Costuming Wonderland” (also available on the DVD release, MSRP: $29.99) and “Characters of Underland,” focus on the humans and CGI characters in the film, respectively. “A Stitch in Time” goes over the detailed wardrobe choices for the human stars—specifically Wasikowska, Depp, Baron Cohen and Bonham Carter—and talks about the challenges of making the costumes for the returning characters as interesting as they were before. “Character of Underland,” meanwhile, focuses on the supporting CGI stars of the film—McTwisp, Thackery, the Cheshire Cat, Tweedledee and Tweedledum, Mallymkun, Absolem and Wilkins—and how the filmmakers wanted to make sure the story was populated with both human and animal characters. It’s interesting to hear how the gender of Mallymkun was changed from “Alice’s Adventures in Wonderland” so the dormouse could have a thing for Hatter and nice to see the featurette dedicated to the late Alan Rickman, who voices Absolem in the film.

Given the many digital effects in the movie, it should come as no surprise that two “Scene Peelers” are also included on the release, showing blue screen footage of Alice going through the looking glass and entering Time’s castle for the first time next to the final CGI scenes featured in the film. Both Scene Peelers come with an introduction from the film’s director, James Bobin (“Da Ali G Show,” “Muppets Most Wanted”), who points out how the looking glass scene only took a week to shoot but a year and a half to finish.

Viewers get a behind-the-scenes look at the making of P!nk’s “Just Like Fire” music video, too, where the talented singer discusses her relationship with the music video’s director, Dave Meyers, why she wanted to contribute to the film’s soundtrack and how her daughter and husband make cameo appearances in the “Alice Through the Looking Glass”-inspired video. Naturally, the finished music video is included among the extras as well.

Five deleted scenes—“Alice’s Bedroom and Rabbit Hole,” “Alice Tackles Hamish,” “Time Comforts Racie in the Sitting Room,” “Racie in the Castle” and “Time Can’t Follow Alice”—are also featured on the Blu-ray disc, which viewers can watch with optional audio commentary from Bobin. The commentary track doesn’t add too much to the experience—most of the scenes were cut or trimmed for time and pacing reasons, minus the one scene where Alice tackles Hamish (Leo Bill), which was cut because it made her seem a little crazy. None of the scenes really add much to the film either, although there was a nice moment early on in Alice’s bedroom that showed her reminiscing about her time in Wonderland and her friendship with Hatter.

A feature-length audio commentary by Bobin is included as well that offers a few interesting tidbits about the movie, like the fact that Depp and Baron Cohen improvised one scene for almost a half hour and ended up breaking the camera cause the take went so long and it was so hot on set. Bobin also points out his nod to Scooby Doo in the film, how the cast was all good sports during particularly hot and cold shoots, when certain scenes were filmed on a set and when they were filmed at an actual location and how Alice’s generation was really the first generation of strong, independent women who insisted on being treated equally. Bobin even jokes at the end of the film when Alice is seen with short hair that she cut her hair because she didn’t care what other people would think. While the commentary track is informative at times, there are several extended lulls that cause viewers to lose interest.

Wrapping up the bonus features is the quick featurette “Time On…” that features Baron Cohen in character discussing such things as Time’s friendship with Lewis Carroll, what Time thought when Carroll first wrote “Alice Through the Looking Glass” (he thought the book was rubbish) and Time’s role in the film as eye candy to attract young girls “ages 50 to 65.” The extra concludes with a picture of Time and Carroll together. Although comical, the featurette is far too brief (just under two minutes). Still, it’s a nice inclusion for fans of the “Borat” and “Ali G” star.

While “Alice Through the Looking Glass” will never be considered one of Disney’s masterpieces, the dazzling film is still worth a look for those who missed it in theaters. Eventually, though, it will likely be the live-action Disney movie that time forgot.