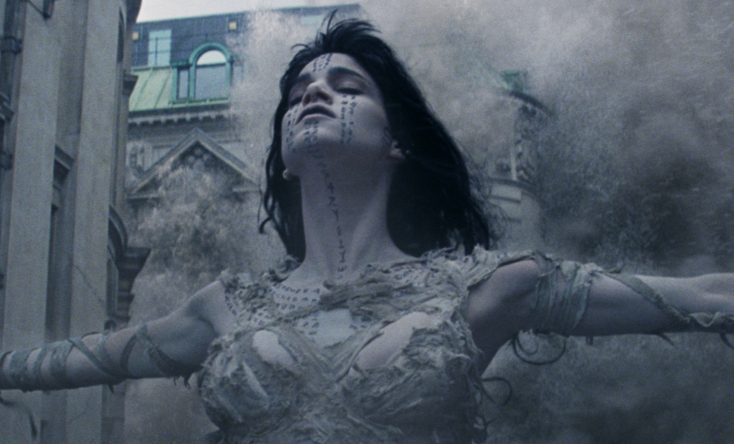 Although Universal’s completely refurbished reboot of its 85-year-old “Mummy” franchise arrives under the studio’s new “Dark Universe” banner, this enjoyably entertaining tongue-in-cheek adventure turns out to be more comedy than Karloff. Sure, there’s a potentially catastrophic scenario that involves bringing the Egyptian god of death to our world, and quite a few people literally have the life sucked out of them. But this flick is such a fast-moving fun ride that it offers a promising start to what is planned to be a new shared-world series of updated classic creature features. Think Marvel, but with monsters as the main characters.

Tom Cruise is terrific as the thieving but good-natured Nick Morton, a present-day version of Indiana Jones whose interest in acquiring antiquities has nothing to do with academia. A stolen map that may point to hidden treasure, unless something has been lost in translation (hint!), leads him to an enemy-controlled Iraqi village. A run-and-gun firefight there is the first of many exciting action scenes that perfectly balance the tale’s picturesque Pharaoh-era flashbacks, dead-of-night bad doings and secret-organization machinations.

Sofia Boutella (“Star Trek Beyond,” “Kingsman: The Secret Service”) is bad-girl irresistible as the Egyptian princess Ahmanet, whose devil’s bargain to claim the throne she believed was rightfully hers was rudely interrupted way back when. Mummified alive for millennia before escaping her pilfered sarcophagus, she sets her sights on Nick as the new vessel for the death god Set.

Fortunately, Nick has hooked up with the ridiculously beautiful blond Egyptologist Jenny Halsey, played with sexy smarts by Annabelle Wallis (“King Arthur,” TV’s “Peaky Blinders”). She owes Nick one after he saves her from a plummeting plane in the movie’s most thrilling scene, a wild free-for-all disaster that throws everyone weightlessly around a rapidly disintegrating cargo hold.

Russell Crowe is alternately amusing and alarming as Jenny’s smilingly self-assured boss Henry, who has a fascinating secret that shouldn’t be spoiled. Henry heads the clandestine organization Prodigium, whose mission is to recognize, contain, examine and destroy all manifestations of evil. The bad news for Nick is that being cursed and psychically connected to the exotic Ahmanet makes both of them targets for extermination.

The movie’s weak link is Jake Johnson (“Let’s Be Cops,” TV’s “New Girl”), who is bro-speak irritating as Nick’s partner-in-crime Chris Vail. His hammy presence seems intended to tip the movie into an outright “Shaun of the Dead”-style parody, which is at odds with the rest of the movie’s affectionate-takeoff tone. That may be a fine line, but Johnson definitely is on the wrong side of it. Vail’s annoying presence may be due to a case of too many cooks almost spoiling the broth, considering how many writers are credited here: three for the screenplay, and three others for the story.

Other than that flaw, “The Mummy” is nimbly directed by producer and co-writer Alex Kurtzman (“People Like Us”), who also co-wrote two “Transformers” flicks, a pair of “Star Trek” installments and Cruise’s “Mission: Impossible III.” He proves he knows his way around a big-budget spectacular by serving up sensational special effects ranging from sandstorms to swimming zombies to scary swarms of spiders. A frantic churchyard battle against the disgustingly deteriorated undead that leads to a high-speed ambulance chase through the woods wonderfully defines the term “scared silly.”

When Prodigium head Henry points out that Nick has entered “a new world of gods and monsters,” the phrase’s double meaning is akin to Nick Fury advising “Iron Man”‘s Tony Stark that he has “become part of a bigger universe.” If subsequent installments of Universal Studios’ monster mash makeovers (which will include Frankenstein, Dracula, the Wolfman and the Invisible Man) are as light, limber and likable as this one, “The Mummy” could result in more than one revival.