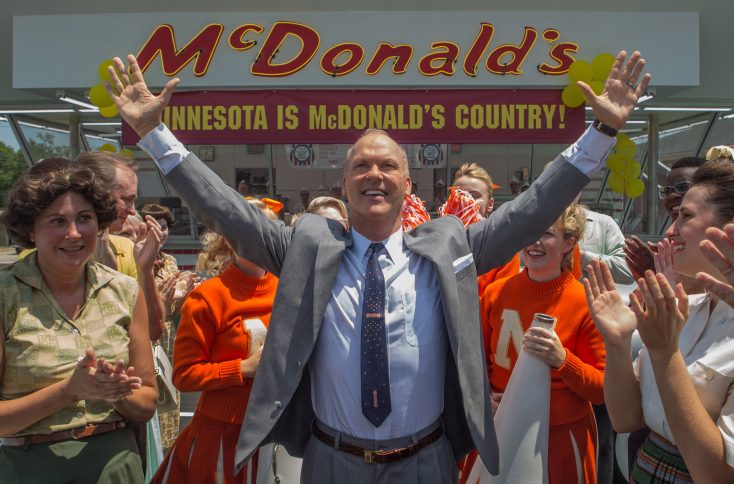 Not many people found “The Founder” when it was in theaters earlier this year, but the story behind America’s most iconic fast food establishment is definitely worth seeking out on Blu-ray and DVD.

The story of how a struggling salesman from Illinois met two brothers working a revolutionary burger operation in Southern California in the 1950s and turned it into a billion-dollar empire, “The Founder” stars Michael Keaton (“Birdman or (The Unexpected Virtue of Ignorance”) as McDonald’s so-called founder, Ray Kroc. Truthfully, Ray wasn’t the founder of McDonald’s at all, which should be obvious given his last name. The real founders of the fast food eatery were siblings Mac and Dick McDonald (played by John Carroll Lynch and Nick Offerman, respectively), who brought Kroc on to help franchise the concept when he became enamored with its potential—and eventually lost their business to him.

While most people have dined at a McDonald’s at least once in their life, not everyone knows the story behind its global success. “The Founder” is a well-written, well-acted, beautifully designed film that sheds some light on the fast food chain’s controversial beginnings. Keaton plays Ray Kroc perfectly, leaving audiences questioning whether he’s a hero or a villain. While there’s no doubt the McDonald brothers got the short end of the stick regarding their deal with the ruthless businessman, without Kroc’s determination, McDonald’s would never have been the iconic fast food establishment it is today. The engaging and unbiased script by Robert Siegel (“The Wrestler”) tips its hat to both Kroc and the McDonald brothers wherever it’s appropriate, acknowledging both the innovative contributions the McDonald brothers brought to the table as well as Kroc’s persistence and vision.

The film falters, though, when it tries to incorporate Kroc’s personal life into the narrative. Scenes of Kroc at home with his first wife Ethel (Laura Dern) bring the movie to a screeching halt. Not that Dern doesn’t play the part of the neglected spouse well (Keaton actually praises her performance for not having Ethel come across as a shrew during the press conference extra included on the DVD and Blu-ray), it’s just that the story between Kroc and the McDonald brothers is so captivating, Kroc’s failing marriage isn’t nearly as interesting to watch. The Ray-and-Ethel storyline also doesn’t really play an important part in the film, so the scenes just seem thrown in the movie for filler.

Both “The Founder” DVD (Anchor Bay Entertainment, MSRP: $29.95) and Blu-ray/DVD Combo Pack with Digital HD (MSRP: $39.99) contain almost an hour of identical bonus materials, including a behind-the-scenes gallery that focuses on the making of the film. Viewers can either watch the five featurettes individually or via a “play all” function.

“The Story Behind the Story” discusses how the film’s producer, Don Handfield, first became interested in Ray Kroc after hearing Mark Knopfler’s song “Boom, Like That” 11 years ago and how Dick McDonald’s family waited for 50 years to tell McDonald’s story on the big screen. Director John Lee Hancock (“The Blind Side”) also shares how he thought the story was interesting because he initially pulled for Kroc at the start of the film, but then felt “at best” ambivalent toward his approach to business by the end of the movie. As Nick Offerman points out, the film leaves final judgement up to the interpretation of its audience.

“Michael Keaton as Ray Kroc” features the cast and crew singing the actor’s praises as “The Founder’s” leading man, discussing the many films Keaton has starred in over the years and the impact he had on some of the actors on set. Offerman jokes that whenever he was in a scene with the Academy Award nominee he felt like a bad actor because he was so in awe of watching Keaton perform that he forgot he had lines, too. Keaton also discusses during the featurette how amazed he was that no one ever thought to tell McDonald’s story before.

“The McDonald Brothers” focuses on McDonald’s real founders and how Dick was the idea man while Mac was the people person. The featurette briefly praises Nick Offerman and John Carroll Lynch’s performances as well, with producer Don Handfield noting how versatile Offerman is even though the “Parks and Recreation” star is best known for comedy. Michael Keaton briefly reflects on the cultural impact McDonald’s had on the country, too, during the enlightening extra.

“The Production Design” takes a look at how the art department created a film that, in Nick Offerman’s words, made people feel like they had “stepped into a Norman Rockwell painting.” Handfield recalls how when Michael Keaton first walked on set he thought the crew had found an old McDonald’s and refurbished it for the production, when in actuality the restaurants featured in the film were built from scratch by production designer Michael Corenblith and his team. Corenblith takes viewers on a tour of the original San Bernardino McDonald’s revolutionary kitchen during the featurette, which was painstakingly recreated for the movie, pointing out some interesting details along the way like how McDonald’s signature orange drink was made from bruised oranges that couldn’t be sold because of their appearance but were still good to juice. Corenblith also addresses how he made sure McDonald’s iconic yellow, red and white colors weren’t used prominently elsewhere in the film to give the restaurant’s famous color scheme sort of a futuristic feel that clashed with the look of the rest of the movie.

Wrapping up the featurettes is a quick Building McDonald’s: Time Lapse Video that shows the crew building the McDonald’s location seen in the film with the now-famous golden arches.

The only other extra included on the DVD and Blu-ray is a near 40-minute video of the press conference select members of the cast and crew held in Los Angeles on Jan. 12, 2017, before the film’s expanded theatrical release nationwide. While some of the information covered is repeated from the behind-the-scenes featurettes, the press conference is still fairly informative, and includes Dick McDonald’s grandchildren Jason and Corey French talking about the making of the film and how surreal it was to visit the set. Additionally, Jeremy Renner (“The Avengers”), who produced the film, discusses what drew him to the movie and why he didn’t cast himself for a part. Other interesting tidbits shared during the panel include how much Michael Keaton, Laura Dern, Nick Offerman and John Carroll Lynch knew about Ray Kroc prior to signing on to the film; Michael Keaton’s observations on what the American dream means to those overseas after promoting the movie in foreign countries; how writer Robert Siegel is still torn when watching the film on what he thinks of Ray Kroc (sometimes he hates what he did to the McDonald brothers, other times he gets where Kroc is coming from); and that John Carroll Lynch really likes Egg McMuffins.

While the general public may not love McDonald’s as much as they once did due to more and more people become increasingly concerned with the types of food they’re putting into their body, that doesn’t mean viewers should stay clear of “The Founder.” The film is an informative and interesting look at the fast food giant, and anyone who has ever eaten at a McDonald’s before is sure to find its story highly entertaining.

‘Boy Behind the Door,’ ‘National Champions,’ ‘Shooter’ and More on Home Entertainment This Week