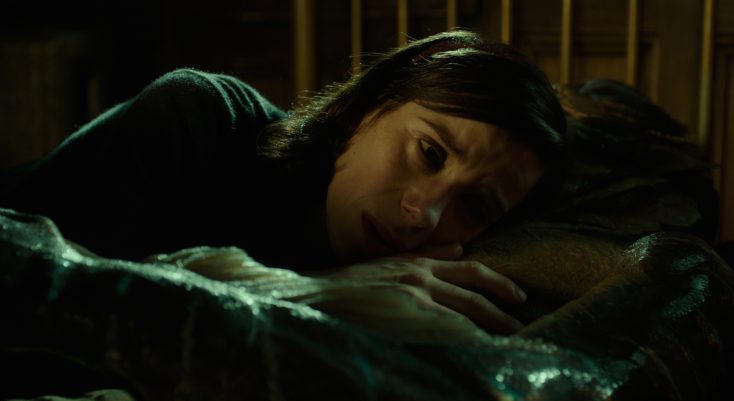 “The Shape of Water” is an R-rated and sometimes viciously grim adult fairy tale with a sweetly sensual and irresistibly touching cross-species romance at its center. Although occasionally reminiscent of numerous other films in plot or appearance (“E.T.,” “Pennies From Heaven,” “Splash,” “Amelie,” and even David Lynch’s “Dune” come to mind), it somehow feels refreshingly original, in addition to being thoroughly charming. It also manages to include implicit criticisms of human failings such as racism, homophobia, sexism, anti-Semitism and prejudice against the disabled without seeming too preachy or didactic about being good for you.

In other words, this is the movie that fans of director Guillermo del Toro have been hoping for since his 2006 fantasy masterpiece “Pan’s Labyrinth.” His other features since then—a visually impressive but flat 2008 sequel to “Hellboy,” the 2013 battling-robots adventure spectacular “Pacific Rim,” and 2015’s forgettable haunted-house flick “Crimson Peak”—had their moments, but none possessed the heart or soul of this awards-worthy wonder.

Like “Pan’s Labyrinth,” “The Shape of Water” features actor Doug Jones very convincingly costumed as a startlingly inhuman creature, but this time only his exterior is monstrous. Resembling a very upgraded reboot of the creature from the black lagoon or a hunkier Abe Sapien, he is imprisoned in a Baltimore research facility’s holding tank in the Cold War days of 1962, after being dragged from a South American river where tribes worshipped him as a god. The American military is brutally studying his physiology for tips on how to win the space race, but the Russians intend to lethally sabotage that plan. “We don’t need to learn,” one of their agents says. “We need Americans not to learn.”

Actress Sally Hawkins perfectly conveys the heartbreaking vulnerability and courage of mute cleaning woman Elisa Esposito, who takes pity on the tortured creature. Michael Shannon is frighteningly excellent as government agent Richard Strickland, who is savagely determined to learn the creature’s secrets—either by administering the electric cattle prod he calls his “Alabama howdydoo” or by vivisection. Richard Jenkins shines as Elisa’s pleasantly deadpan neighbor Giles, a former ad-agency illustrator and alcoholic striving to get his career back. Michael Stuhlbarg is researcher Dr. Robert Hoffstetler, who has significant secrets of his own and Octavia Spencer is Elisa’s cleaning-staff compatriot and sometime sign-language translator Zelda Fuller.

The screenplay by del Toro and Vanessa Taylor is a marvel of mixed tones that range from tender eroticism to quirky comedy to bloody horror, yet successfully blend into a literally wonderful love story. The always creative Alexandre Desplat supplies an enjoyably distinctive score that perfectly complements the onscreen strangeness. And the production design by Paul Denham Auterberry is stunning, whether conveying the industrial-concrete gloom of Elisa’s oppressive workplace, the homey eccentricity of her period-piece apartment, or the floating images of her dreams.

The film’s title refers to an unidentified poem quoted in voiceover about the humbling, overwhelming ecstasy of religious love: “Unable to perceive the shape of you, I find you all around me.” It also works as a metaphor for the movie’s primary moral. Like water, true love will conform to fill the dimensions of any vessel that contains it, whether mute maiden or misunderstood monster. As del Toro has noted, “It doesn’t matter what shape we put love into, it becomes that, whether it’s man, woman or creature.”

This is one of the year’s best films, and one so beautiful and emotionally immersive that it genuinely deserves to be seen on a theater screen.

“The Shape of Water” opens in New York Friday, Dec. 1. The film expands to Los Angeles on Dec. 8, and rolls out to other markets in subsequent weeks.

Disney’s ‘Wreck-It Ralph’ Is a Winner