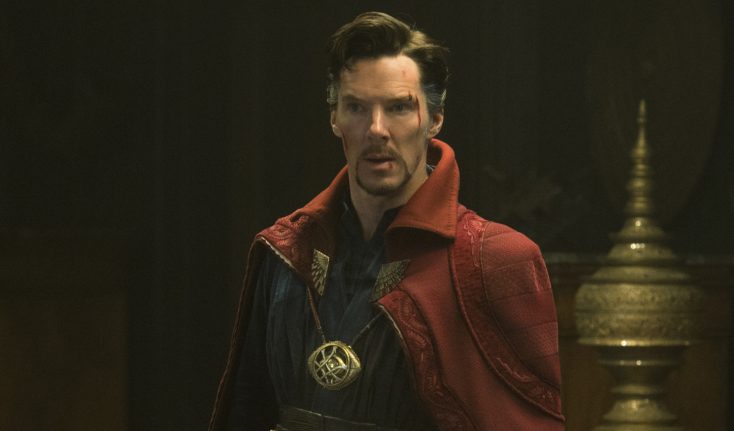 If ever there was a movie to own in 3D, it would have to be Marvel Studios’ “Doctor Strange.” Not surprisingly, the jaw-dropping superhero blockbuster is now available to watch at home in 3D thanks to a three-disc Cinematic Universe Edition that packages a Blu-ray 3D disc with 2D Blu-ray, DVD and Digital HD copies of the film (a 2D Blu-ray/DVD Combo Pack with Digital HD is available as well).

The story of Dr. Stephen Strange (Benedict Cumberbatch), a world-famous neurosurgeon whose life is forever changed after a car crash renders his hands useless, the film introduces the egotistical surgeon-turned-sorcerer into the ever-growing Marvel Cinematic Universe (MCU). Though far from the studio’s best film, a strong cast and eye-popping, “Inception”-like visual effects make the origin story entertaining from beginning to end as Dr. Strange travels to Kamar-Taj in search of a cure and discovers the mystical arts instead.

The Blu-ray editions of the film come loaded with bonus features, including five behind-the-scenes featurettes that take a closer look at the mind-blowing movie. Viewers can either watch each featurette separately or altogether via a Play All option.

“A Strange Transformation” focuses primarily on the star of the movie and how the filmmakers pushed back shooting the film for six months so that Cumberbatch (who was already contracted to do a stage version of “Hamlet”) could accept the part. A testament to Cumberbatch’s tireless work ethic, the actor began shooting “Doctor Strange” in Nepal just 36 hours after taking his final bow onstage. The featurette also takes a brief look at the history of Marvel’s “Doctor Strange” comics, how the film differentiates itself from other movies in the MCU (according to Tilda Swinton, who plays the Ancient One in the movie, it almost feels like a “huge experimental film”) and the filming of Dr. Strange’s horrific, life-changing car accident, which was shot on two different continents with eight different Lamborghinis.

“Strange Company,” meanwhile, focuses on the rest of “Doctor Strange’s” star-studded cast, including Swinton as the Sorcerer Supreme; Rachel McAdams as Dr. Strange’s former love interest, Dr. Christine Palmer; Mads Mikkelsen as the villainous Kaecilius; Benedict Wong as Dr. Strange’s intellectual mentor, Wong; and Chiwetel Ejiofor as Dr. Strange’s mystical trainer, Mordo, as well as the film’s director, longtime “Doctor Strange” comic book fan Scott Derrickson (“Sinister,” “The Day the Earth Stood Still”). Topics discussed during the extra include just how ambitious the movie was and Derrickson’s controversial decision not to cast a Tibetan man as the Ancient One and instead to approach the character in a new way with Swinton in the role.

“The Fabric of Reality” discusses not only the costumes in the film but also the movie’s sets and production design. As Cumberbatch notes, “Every set is a sublime work for art.” Details brought to light during the informative extra include how Dr. Strange’s clothes have less buttons post-accident since he has a harder time using his fingers and how Kathmandu suffered an earthquake shortly after the crew scouted the Nepal city for the film. The crew decided to shoot there for four days anyway, as they fell in love with the location so much. The extra also features a cute clip of a costumed Cumberbatch surprising a local comic book store in New York by popping in unannounced while shooting the movie.

“Across Time and Space” looks at the visual effects of the film and how, as Swinton put it, the movie was more about “creation, not destruction” and “bending things, not breaking them.” The extra also takes a look at the exciting new fighting style created specifically for the movie that blends three to four different types of martial arts and how creating the astral form of the characters when they projected their soul outside of their body was both “the simplest and hardest” visual effect seen in the film, as the crew didn’t want the astral forms to look like ghosts but they still wanted the effect to look ghostly. Additionally, viewers will hear Cumberbatch reflect on how he got punched, hit and even tripped on his cape while filming the many action sequences in the film, which is “so not surperheroic, but funny.”

Wrapping up the behind-the-scenes featurettes is “The Score-cerer Supreme,” which focuses mainly on creating the film’s score. Since “Doctor Strange” was an original story and not a reboot, composer Michael Giacchino discusses the freedom he had with writing the music and how he was basically able to do what he wanted so long as the score was a bit darker than the other Marvel films and more “mystical.” Viewers will see scenes from the film alongside the orchestra’s recording sessions and learn how Giacchino built most of the music around a harpsichord and an electric sitar. There’s also a bit at the end of the extra that takes a look at the film’s post-credits scenes and the comedic timing Cumberbatch and Chris Hemsworth (who plays Thor in the Marvel Cinematic Universe) had while filming their tag to set up the next film in the “Thor” franchise, “Thor: Ragnarok.”

Viewers will get to see more of Thor in the satirical short “Team Thor: Part 2,” which reunites Thor with his roommate, Darryl, and hilariously chronicles what Thor has been up to on Earth since the Avengers fought in “Captain America: Civil War.” Running approximately five minutes in length, viewers will see Thor and Darryl disagree about Thor needing to get a job to pay rent (Thor thinks his Asgardian coins should be an acceptable form of payment, as they will fetch quite a penny from fans since he’s a celebrity), Thor being massively out of touch with reality (he often says he’ll deal with things “next century”) and Thor telling a class full of children how “friendship is not forever” as he reflects on how no one even bothered to call him when the Avengers were fighting against one another. Thor comments, though, on how he at least has his “best friend forever,” Darryl, and then asks him if he wants to try to hold his hammer (“As if,” Thor scoffs).

“Marvel Studios Phase 3 Exclusive Look” also takes a brief behind-the-scenes look at the shooting of “Thor: Ragnarok” as well as “Guardians of the Galaxy Vol. 2” and sheds some light on the upcoming “Black Panther” and “Avengers: Infinity War” movies.

Five deleted and extended scenes are included on the Blu-ray releases as well — “Strange Meets Daniel Drumm,” “Kaecilius Searches for Answers,” “The Kamar-Taj Courtyard,” “Making Contact” and “Lost in Kathmandu” — which viewers can either watch individually or altogether via a Play All option. Probably the most entertaining scene of the bunch is the extended “Lost in Kathmandu,” where Dr. Strange helps a limping dog with his injured foot then, when the dog tries to shake Dr. Strange’s hand with his other paw as a thank you, jokes with the pup, “Wait ’til you get my bill.” Kaecilius’ blood-splattered approach to proving there is no afterlife is also quite interesting in “Kaecilius Searches for Answers.”

A fairly funny gag reel is included on both Blu-ray editions, too, featuring the cast goofing off and messing up their lines on set. Highlights include Cumberbatch scaring McAdams during a hospital scene, making his injured hands talk to each other from the hospital bed and constantly missing a prop Ejiofor throws at him during one of the training sequences.

Wrapping up the bonus features is a commentary track by Derrickson that was recorded a day before the film’s premiere. While Derrickson’s candid commentary covers some interesting details about the film, like how accurate all of the medical procedure scenes were and how early test screening audiences loved the film’s visual effects but found them to be a bit taxing, a good portion of the track is dedicated to why Derrickson made some of the decisions he did when making the movie and how he got the project. Derrickson discusses how he went to eight different meetings before getting the job; stands up for his “controversial” decision to cast a white British woman as the Ancient One and make Wong the major Asian character instead, noting how Wong went from Dr. Strange’s sidekick in the comics to his intellectual mentor; and even addresses the film’s “Inception” comparisons, saying how he felt “Doctor Strange” built on what was achieved in that film rather than ripping it off or repeating it. Derrickson also reflects on how George Lucas and James Cameron helped influence some of his decisions on set, talks about his admiration for the cast – particularly Ejiofor, who he calls one of the most educated and eloquent people he’s ever met – and even apologizes to his high school English teacher for all of the “ums” said during his commentary.

The Cinematic Universe Edition also includes a collectible “Doctor Strange” lenticular inside of its packaging for fans to display. The single-disc DVD release sadly contains no bonus features.

Although Dr. Strange may not be as charismatic as “Iron Man’s” equally egotistical Tony Stark, he’s still a welcome addition to the MCU and his origin story is easily the most stunning superhero film to come out of Marvel Studios thus far. Its 3D Blu-ray release is just what the doctor ordered to get the most out of the mind-bending special effects now that the movie is no longer in theaters. Even if you don’t have 3D Blu-ray capabilities, though, the extensive list of extras also found on the 2D Blu-ray/DVD Combo Pack — not to mention the engaging story and powerful performances — make “Doctor Strange” a must own for any Marvel fan. It may not be the best single-character introduction in the MCU, but it’s an impressive origin story nonetheless and a journey Marvel fans are sure to want to experience again and again.