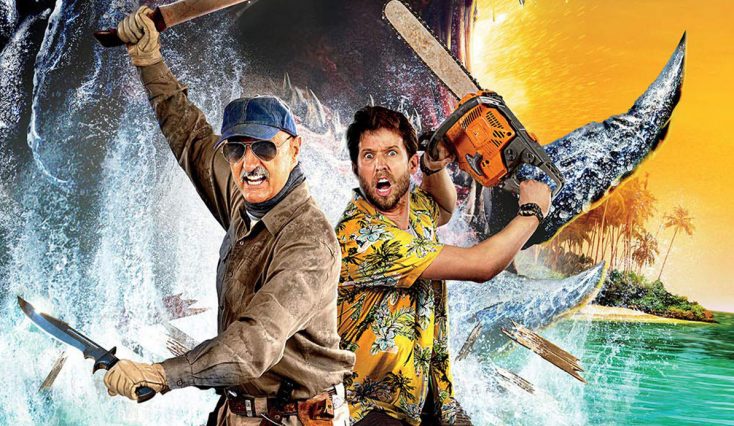 BACK TO THE FUTURE: THE ULITMATE TRILOGY. (DVD Artwork). ©Universal Home Entertainment.

“Back to the Future: The Ultimate Trilogy”

Time to head back in time when “Back to the Future: The Ultimate Trilogy” arrives on 4K Ultra HD for the first time ever Tuesday Oct. 20, from Universal Pictures Home Entertainment (UPHE).

In 1985, director Robert Zemeckis, executive producer Steven Spielberg and producer/screenwriter Bob Gale embarked on a three-part journey through time that broke box-office records worldwide and catapulted “Back to the Future” into one of the most beloved trilogies in motion picture history.

This collection is loaded with bonus material including a bonus disc with more than an hour of brand new content such as rare audition footage from Hollywood stars Ben Stiller, Kyra Sedgwick, Jon Cryer, Billy Zane, Peter DeLuise and C. Thomas Howell, a tour of the film’s props and memorabilia hosted by co-writer/producer Bob Gale, a sneak peek at the new musical show, and a special episode of the popular YouTube Series “Could You Survive the Movies?”

Join Marty McFly (Michael J. Fox), Doc Brown (Christopher Lloyd) and a time-traveling DeLorean for the adventure of a lifetime as they travel to the past, present and future, setting off a time-shattering chain reaction that disrupts the space-time continuum.

“Cut Throat City” arrives in a Blu-ray Combo Pack and on DVD Tuesday Oct. 20, from Well Go USA Entertainment. It also is now available to own on Digital.

After Hurricane Katrina, four boyhood friends return to NOLA’s Lower Ninth Ward. As FEMA fails to provide aid, they reluctantly turn to a local gangster for help. When the job tanks, they must outrun and outsmart a system rife with corruption. Bonus content includes behind-the-scenes footage and deleted scenes.

“Cut Throat City” tells the story of four boyhood friends from New Orleans’ Lower Ninth Ward who return after Hurricane Katrina to decimated homes, no jobs, and no help from FEMA. Out of options, they reluctantly turn to a local gangster, who offers them one shot at turning their situations around—by pulling off a dangerous heist in the heart of the city. When the job goes bad, the friends find themselves on the run, hunted by two relentless detectives and a neighborhood warlord who thinks they stole the heist money.

Scott and Vincent, top recruits at the prestigious Cicero Market Technologies Corporation, are tasked with the development and implementation of cutting edge technologies. The sole purpose of their work is to bring about medical, environmental and physics advancements. However, overcome by their own curiosity, the pair begin to sneak their work home with them. They push the boundaries of particle collision science to undiscovered levels stumbling upon a parallel universe complete with an alternate version of Scott. As their days and nights unfold, they begin to discover that others seek their tech to advance their own agendas, which they intend to fulfill at any cost.

Colossal Content is a new film distributor from Paul Tomborello and Sean C. Stephens, and “Expulsion” marks the company’s first official release ahead of several other projects currently in various stages of development or acquisition.

“Save Yourselves!” is now available on Blu-ray, DVD and Digital, from Universal Pictures Home Entertainment.

A young Brooklyn couple (Sunita Mani, “Glow” and John Reynolds, “Stranger Things”) heads to an upstate cabin to unplug from their phones and reonnect with each other. Blissfully unaware of their surroundings, they are left to their own devices as the planet falls under attack. The film is written and directed by Eleanor Wilson.

Bonus features including closer look into the film’s visual effects, deleted and extended scenes, a blooper reel and more.

RLJE Films, a business unit of AMC Networks, will release the thriller “Spree” Tuesday Oct. 20, on Blu-ray and DVD.

Widely regarded as one of the finest and most frightening ghost stories ever written, Shirley Jackson’s “The Haunting of Hill House” serves up sinister source material for this exciting thriller starring Liam Neeson, Catherine Zeta-Jones, Lili Taylor, Owen Wilson and Bruce Dern.

The limited-edition Paramount Presents Blu-ray disc is presented in collectible packaging that includes a foldout image of the film’s theatrical poster, and an interior spread with key movie moments. Newly remastered from a 4K film transfer supervised by de Bont, “The Haunting” Blu-ray also includes a new “Filmmaker Focus” with the director, access to a Digital copy of the film, as well as a the previously released vintage behind-the-scenes featurette hosted by Zeta-Jones, and original trailers.

RLJE Films, a business unit of AMC Networks, will release the thriller “The Owners” Tuesday October 20, on DVD and Blu-ray.

A group of friends think they found the perfect easy score—an empty house with a safe full of cash. But when the elderly couple that lives there comes home early the tables are suddenly turned. As a deadly game of cat and mouse ensues the would-be thieves are left to fight to save themselves from a nightmare they could never have imagined.

The Sword of God

Get medieval with the dark, enthralling Middle-Ages thriller, “Sword of God,” arriving on DVD/Digital Tuesday Oct. 20, from Film Movement.

In the early Middle Ages, a holy order of knights embarks on a dangerous journey to spread Christianity and baptize the pagan inhabitants of an isolated village hidden deep in the mountains of a faraway island. After being shipwrecked, two lone survivors set out to complete their mission, but instead find themselves pitted against one another in a blood-soaked battle between salvation and damnation. Directed by Oscar-nominated filmmaker Bartosz Konopka, this Polish-language (with English subtitles) genre-defying epic has won several awards at film festivals around the world.

A family vacation takes a terrifying turn when parents Paul and Wendy discover their young daughter has vanished without a trace. Stopping at nothing to find her, the search for the truth leads to a shocking revelation in this engrossing psychological thriller.

“The Vanished” also will be available in select theaters, On Demand and on Digital.

The mighty Shriekers are back and more terrifying and deadlier than ever in “Tremors: Shrieker Island,” the newest chapter of the long-running “Tremors” franchise, premiering exclusively on Digital, Blu-ray, DVD and On Demand Tuesday Oct. 20.

Noted Graboid hunter (played by Michael Gross, “Family Ties,” “Suits”) reprises his iconic role as Burt Gummer along with Jon Heder (“Napoleon Dynamite,” “Blades of Glory”) as Burt’s potential protégé in this all-new thrilling and hilarious movie that brings wild new adventures and terrors to the team against the backdrop of a small island in the Tropics filled with magnificent beaches, crystal blue water and lush forests.

Loaded with epic monster attacks, quick-witted humor and outrageous antics, “Tremors: Shrieker Island” on Blu-ray, DVD and Digital makes its debut timed to coincide with the 30th anniversary of the original film and comes packed with exclusive bonus features including a collection of top 30 movie moments showcasing footage from all seven films, a breakdown of the various species of “Tremors” monsters, and a special tribute to Michael Gross from Kevin Bacon, Jamie Kennedy, Ariana Richards and several past and present cast and crew, taking fans deeper into the renowned franchise and legendary world of “Tremors.”

Additionally, die-hard “Tremors” can celebrate 30 years of the horror-comedy franchise with “Tremors 7-Movie Collection,” available on DVD Tuesday Oct. 20. For the first time ever, new and longtime fans can experience the excitement and adventure of all seven movies in one set: “Tremors,” “Tremors 2: Aftershocks,” “Tremors 3: Back to Perfection,” “Tremors: The Legend Begins,” “Tremors 5: Bloodlines,” “Tremors: A Cold Day in Hell” and “Tremors: Shrieker Island.”

RLJE Films, a business unit of AMC Networks, will release Season 2 of the AMC series “NOS4A2” Tuesday Oct. 20, on DVD and Blu-ray.

Based on the highly acclaimed best-selling novel by Joe Hill (“Horns”), the horror thriller television series premiered the first season on AMC last year as the second-best cable debut of 2019.  The second season returned to AMC in June, and was also simulcast on BBC America.

“NOS4A2: Season 2” picks up eight years after the events of season one. Vic McQueen remains more determined than ever to destroy Charlie Manx. Charlie, having faced his own mortality, emerges desperate for revenge against Vic. This time, he sets his sights on the person who means most to Vic – her eight-year-old son Wayne. The race for Wayne’s soul sends Vic and Charlie on a high-speed collision course, forcing both to confront the mistakes of their pasts in order to secure a hold on Wayne’s future.

“Quiz” tells the incredible true story of the biggest game show scandal in UK history. When a simplistic, “question and answer” quiz show, “Who Wants to be a Millionaire?,” goes on the air in the UK the nation is gripped. As the show’s ratings grow, so does Diana Ingram’s desire to be in the hot seat with the chance of winning the biggest cash prize in history. When her husband Charles, an eccentric army man, makes it onto the show, he causes a major scandal after being accused of cheating his way to winning £1 million.

The Great: Season One

The hilarious and offbeat period comedy “The Great: Season One” arrives on DVD Tuesday Oct. 20, 2020 from Paramount Home Entertainment. Season One is now available for purchase on Digital platforms.

Created and executive produced by Academy Award nominee Tony McNamara (“The Favourite”​), “The Great” is a satirical, comedic drama—and occasionally true story—about the rise of Russia’s Catherine the Great (Elle Fanning) from outsider to the longest reigning female ruler in the country’s history. An idealistic romantic young girl, she arrives from Prussia for an arranged marriage to the mercurial Emperor Peter (Nicholas Hoult) hoping for love and sunshine, and finds instead a dangerous, depraved, backward world that she resolves to change.  All she has to do is kill her husband, beat the church, baffle the military and get the court on her side. The series aired on Hulu earlier this year and has been renewed for a second season.

The four-disc DVD set features all 10 episodes, plus exclusive bonus content including interviews with the cast and series creator about the provocative and irreverent depiction of Catherine’s extraordinary story; behind-the-scenes tours of the lavish sets with members of the cast; a look at the opulent makeup, hair and costume designs; and a gag reel.

Front Row Features is giving away a copy of RZA’s star-studded crime drama “Cut Throat City” to three lucky readers on Blu-ray/DVD Combo Pack. To enter the contest, simply email socalmovieeditor@aol.com by Oct. 26 for your chance to win. Good luck!