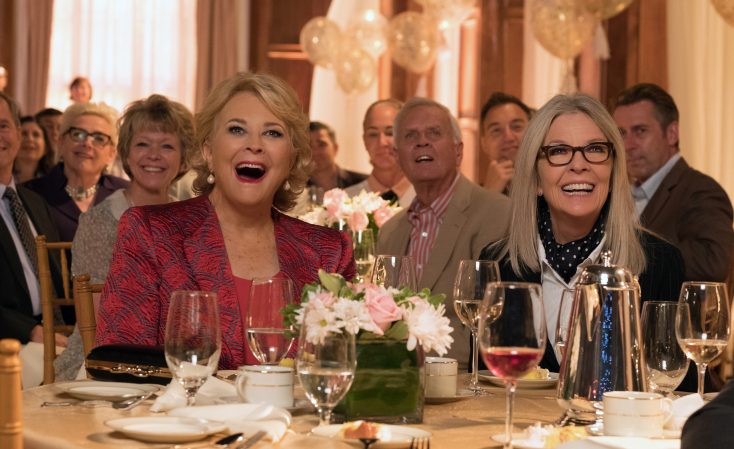 Releasing the same week as 20th Century Fox’s highly anticipated “Deadpool 2” and a week before Lucasfilm’s “Solo: A Star Wars Story,” Paramount Pictures’ sexagenarian rom-com “Book Club” is hoping to cash in on an oft-neglected audience at the box office during its summer blockbuster season: middle-aged and elderly women.

The sleeper hit hopeful focuses on four longtime friends—divorced federal judge Sharon (five-time Emmy Award winner Candice Bergen, “Murphy Brown”), recently widowed mother of two Diane (Academy Award winner Diane Keaton, “Annie Hall”), successful and single hotelier Vivian (two-time Academy Award winner Jane Fonda, “Klute” and “Coming Home”) and long-married chef Carol (Academy Award winner Mary Steenburgen, “Melvin and Howard”)—who have been part of a book club together for most of their lives. Every month, one of them brings a book for all four women to read and the next month they gather to talk about it over wine.

Sharon has been perfectly content being by herself since getting divorced almost 20 years ago, but when she finds out her ex-husband (Ed Begley Jr., “St. Elsewhere”) recently got engaged to a woman almost the exact same age as her son’s fiancee, she decides (with some nudging from her friends) it’s time to create an online dating profile. Vivian, meanwhile, has been happily hopping from bed to bed her whole life—just so long as she never actually sleeps with the men she’s sleeping with. When a former flame (“Miami Vice’s” Don Johnson, who coincidentally is the father of Dakota Johnson, who played “Fifty Shades of Grey’s” protagonist, Anastasia Steele, in the big-screen adaptation) re-enters her life, though, Vivian must decide if she’s truly happy being a single sexpot before the one that got away slips through her fingers once again.

Diane has other problems to worry about now that her husband has passed away, as her two overprotective daughters (Alicia Silverstone, “Clueless,” and Katie Aselton, “The League”) want her to move closer to them in Arizona so that she’s not living by herself in California. During a flight to visit them, however, fate intervenes by having Diane sit next to a single pilot (Andy Garcia, “Ocean’s Eleven”) who instantly becomes smitten by her and her aversion to flying.

While Diane’s children are constantly worrying about their mother dying alone, Carol is worried about her marriage dying. After 35 years of not being able to keep their hands off of one another, Carol and her husband Bruce (Emmy Award winner Craig T. Nelson, “Coach”) have hit a dry spell following his retirement. Carol tries to reignite the flame in any way possible—although even some kinky inspiration from “50 Shades of Grey’s” Christian Grey doesn’t seem to be doing the trick.

Audiences follow these four lovelorn women as they realize that they’re never too old for a little romance. A few laugh-out-loud moments aside, however, “Book Club’s” story by writer-director Bill Holderman (“A Walk in the Woods”) and first-time screenwriter Erin Simms is fairly cliche and predictable. The true joy that comes from watching the movie isn’t seeing Carol sneak two Viagra pills into her husband’s beer and then watching him step out of his car with an erection after being pulled over by a cop for hazardous driving. The film is at its best whenever its four lead actresses are on-screen interacting with each other. Bergen, Keaton, Fonda and Steenburgen seem to be having a blast together, and it’s truly a joy watching these four women carry the movie by themselves.

Still, it’s a shame that the material these acclaimed actresses were given isn’t up to their capabilities. Even the premise of using “Fifty Shades of Grey” as the catalyst for the characters’ sexual reawakening isn’t used to its full potential. So many jokes and references could have been made about the book (and its sequels, which the “Book Club” women also read). Instead, audiences are given a quick montage of shots of Bergen, Keaton and Steenburgen looking shocked while they read it. Only Steenburgen’s character really ever alludes to some of the things Christian Grey does in the book, and even then the references aren’t played for as big of laughs as they could have been. Probably the biggest laugh that comes from using the steamy BDSM series in the movie is when Bergen blurts out one of the book’s more famous lines (which isn’t suitable for print here), which is a shame since the source material could have delivered so many more laughs if used properly.

Ultimately, “Book Club” isn’t giving viewers anything new to enjoy, nor does it keep audiences on the edge of their seats wondering if this fabulous foursome will find their happily ever afters. Fans of its cast will no doubt enjoy seeing these remarkable actresses in the movie but may leave the theater wishing the movie had been funnier. “Book Club” had so much potential to be fun and bawdy, but apparently someone behind the scenes decided to use their safe word too much, resulting in a cute rom-com that’s predictable, safe and far from great.

No Time for Politics in ’13 Hours’