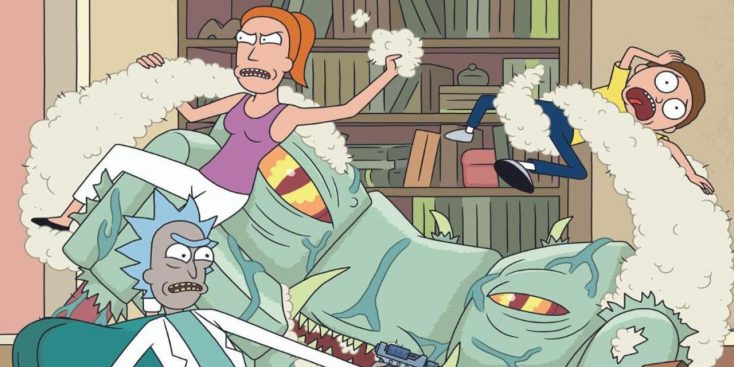 The films are: “Rocketship X-M” (1950), “The Brain from Planet Arous” (1957) and “The Hideous Sun Demon (1958). The DVD set features the original theatrical versions for optimal viewing, these classics have never looked better.

“Rocketship X-M” stars Lloyd Bridges, Osa Massen and John Emery in this sci-fi classic in which a crew of scientists on a mission to the moon end up off-course and land on Mars. The film is directed by Kurt Neumann.

In “The Brain from Planet Arous,” John Agar, Joyce Meadows and Robert Fuller star in this mind-altering epic directed by Nathan Hertz.

“The Hideous Sun Demon” is directed by and stars Robert Clarke delves into a scientific experiment gone wrong. It also stars Patricia Manning and Nan Peterson.

The DVD/Digital will be available for the suggested retail price (SRP) of $29.95.

The Criterion Collection edition of “The Last Waltz” arrives in a 4K UHD + Blu-ray Combo as well as a Blu-ray edition Tuesday March 29.

More than just one of the greatest concert films ever made, “The Last Waltz” is an at once ecstatic and elegiac summation of a vital era in American rock music. Invited to document the farewell performance of the legendary group the Band at San Francisco’s Winterland Ballroom on Thanksgiving, 1976, renowned filmmaker Martin Scorsese conceived a new kind of music documentary. Enlisting seven camera operators (including renowned cinematographers Vilmos Zsigmond, László Kovács and Michael Chapman) and art director Boris Leven to design the strikingly theatrical sets, Scorsese created a grandly immersive experience that brings viewers onstage and inside the music itself. That music—as performed by the Band and a host of other generation-defining artists, including Bob Dylan, Joni Mitchell, Van Morrison, the Staple Singers, Muddy Waters and Neil Young—lives on as an almost religious expression of the transcendent possibilities of rock and roll.

The box set includes a new 4K digital restoration, supervised and approved by musician Robbie Robertson, with 5.1 surround DTS-HD master audio soundtrack. In the 4K UHD edition, it includes a new 4K UHD disc of the film presented in Dolby Vision HDR and one Blu-ray with the film and special features, alternate uncompressed stereo soundtrack, two audio commentaries, featuring director Martin Scorsese; Robertson; other members of the Band; members of the production crew; and performers Dr. John, Ronnie Hawkins and Mavis Staples, a new interview with Scorsese, conducted by critic David Fear, a documentary from 2002 about the making of the film, outtakes, an interview from 1978 with Scorsese and Robertson, a trailer and TV spot, English subtitles for the deaf and hard of hearing and an essay by critic Amanda Petrusich.

Robert Redford made his directorial debut with the critically acclaimed drama “Ordinary People,” which now arrives on Blu-ray as part of the Paramount Presents line Tuesday March 29, from Paramount Home Entertainment.

Donald Sutherland, Mary Tyler Moore and Timothy Hutton give powerful and moving performances as a family being torn apart by tragedy and the unrelenting pressure to maintain a façade of normalcy.

“Ordinary People” marked Hutton’s first film role and his performance not only earned him the Oscar for Best Actor in a Supporting Role, but it also made him the youngest person to win in the category.

Remastered from a new 4K film transfer overseen by Redford, the Paramount Presents Blu-ray is presented in collectible packaging featuring a foldout image of the film’s theatrical poster and an interior spread with key movie moments. The disc also includes new interviews with Hutton and Judith Guest, author of the novel upon which the movie was based.

“Pursuit” arrives on Blu-ray and DVD Tuesday March 29, from Lionsgate.

John Cusack (“Grosse Pointe Blank”) and Emile Hirsch (“Into the Wild”) star in this action-thriller about a tough cop’s hunt for an even tougher criminal. Calloway (Hirsch), a ruthless hacker, is desperate to find his wife—who’s been kidnapped by a drug cartel—when he crosses paths with Detective Breslin. But after Calloway escapes police custody, Breslin joins forces with a no-nonsense female cop to reclaim his prisoner. But is Calloway’s crime-boss father (Cusack) somehow involved in this explosive situation?

“Pursuit” is directed by Brian Skiba from a screenplay he wrote with Andrew Stevens, Dawn Bursteen and Ben Fiore.

Bonus features are a behind-the-scenes featurette and the trailer.

Buster Moon and his crew are back preparing to launch their most dazzling extravaganza yet in “Sing 2,” available to own for the very first time on 4K UHD, Blu-ray and DVD Tuesday March 29, from Universal Pictures Home Entertainment. It also is available now on Digital.

Having earned a 98 percent audience score on Rotten Tomatoes, fans of all ages can now sing, dance and laugh more than ever with this collector’s edition, brimming with exclusive bonus content, including two never-before-seen mini movies with some of your favorite characters, sing-alongs to the hit songs from the film, a dance-along with renowned choreographer Sherrie Silver, outtakes with the star-studded cast and more interactive fun for the perfect family movie night.

All of your favorite singing and dancing all-stars from Illumination’s Sing return in the definitive feel-good event of the year. The ever-optimistic Koala, Buster Moon (Matthew McConaughey) and his cast have big dreams of staging their most dazzling show yet in the glittering entertainment capital of the world, Redshore City. There’s just one hitch: they must persuade the world’s most reclusive rock star, Clay Calloway (Bono), to join them. Rosita (Reese Witherspoon), Ash (Scarlett Johansson), Johnny (Taron Egerton), Meena (Tori Kelly) and Gunter (Nick Kroll) return with all-new characters, spectacular hit songs and electrifying performances in “Sing 2,” a comedy about the emotional healing power of music.

From creators Justin Roiland (“Solar Opposites”) and Dan Harmon (“Community”), go on an intergalactic adventure across the multi-verse with the epic release of the “Rick and Morty: Seasons 1-5” boxed set on Blu-ray and DVD from Warner Bros. Home Entertainment Tuesday March 29.

Get Schwifty while you binge on one of cables #1 watched comedies – and follow the misadventures of America’s favorite crazy scientist and his grandchildren with this outrageous boxed set which includes all 51 episodes from the first five seasons of the award-winning series, along with copious special features, including audio commentary, deleted scenes, “Inside the Episode” segments, numerous featurettes, past animatic sketches, and more.

With Blu-ray’s unsurpassed picture and sound, “Rick and Morty: Season 1-5” Blu-ray release will include 1080p Full HD Video with DTS-HD Master Audio for English 5.1. Featuring all 51 episodes from seasons 1-5 in high definition, as well as a digital code of the seasons (available in the U.S. only).

Front Row Features is giving its readers something to sing about: the chance to win a copy of the hit animated movie “Sing 2!” Three lucky readers will receive a complimentary digital code that they can redeem on Movies Anywhere to enjoy “Sing 2,” courtesy of Universal Pictures Home Entertainment. To enter the contest, simply email socalmovieeditor@aol.com by April 4 and let us know who your favorite character is from the “Sing” movies. Good luck!