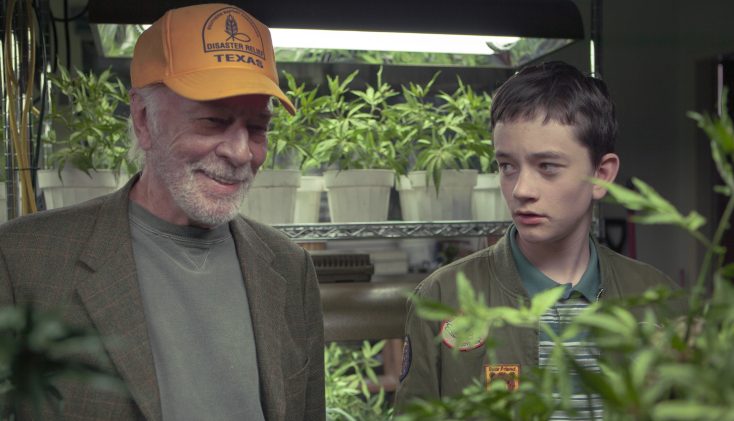 HOLLYWOOD—After replacing alleged serial fondler Kevin Spacey in “All the Money in the World,” Christopher Plummer once again finds himself in another film imbroglio. The Oscar-winning octogenarian stars in Shana Feste’s semi-autobiographical family dramedy “Boundaries.” Some are calling for a boycott of the Sony Pictures Classics film scheduled for release this Friday because of some offensive and threatening Twitter statements made by co-star Peter Fonda.

Starting after midnight Wednesday, June 20 Fonda began posting a series of messages to his 50,000+ followers on Twitter. He called for President Trump’s youngest son, 12-year-old Barron, to be kidnapped from his school and placed in a cage with pedophiles. He also urged kidnapping White House spokeswoman Sarah Sanders’ and DHS chief Kirstjen Nielsen’s children, and proposed that Nielsen get poked while naked in a cage, referring to both of them using an offensive term for a woman’s vagina. Fonda, best known for playing a drifter in “Easy Rider,” made the tweets in response to the President’s controversial policy of separating families of illegal immigrants from Mexico and Central America at U.S. border detention centers.

Plummer, co-star Vera Farmiga (supposedly suffering from an upper respiratory ailment) and Fonda were no-shows at a press conference where they were scheduled to appear Wednesday at the tony Beverly Wilshire in Beverly Hills. A publicist shrugged off their absences from the publicity event with a casual “that’s not really here nor there.” Farmiga and Fonda apparently were at the hotel for some TV interviews in the morning. But by midday, as the backlash over Fonda’s overnight calls for the kidnapping and rape of children reached fever pitch, either the actors, their publicists or the studio itself decided to cancel further interviews. That left Feste (the writer-director of “Boundaries”) and 16-year-old Lewis MacDougall, who plays Plummer’s grandson in the three-generation family dramedy to field questions from the press, under the careful eye of Sony Pictures Classics publicists.

Plummer plays a sketchy marijuana dealer who joins his unsuspecting estranged daughter (Farmiga) and grandson on a road trip along the Pacific Coast, where they make stops along the way so he can meet with his friends/clients. Fonda has limited screen time as one of the Plummer character’s old friends.

Asked about the film’s sudden connection to the immigration debate, Feste responded, “I’d love to just talk about the film. That’s what’s so important to me. I haven’t made a film in three years, so when you do get make a film and sit at a table (of journalists), you want to keep it about the movie, because that’s the most important thing. That’s why we’re all here, I hope.”

Later in the day, Fonda issued an apology for his “vulgar and inappropriate” tweet about Barron, saying in a statement provided to Fox News, “I tweeted something highly inappropriate and vulgar about the president and his family in response to the devastating images I was seeing on television. Like many Americans, I am very impassioned and distraught over the situation with children separated from their families at the border, but I went way too far. It was wrong and I should not have done it. I immediately regretted it and sincerely apologize to the family for what I said and any hurt my words have caused.”

Whether the sudden notoriety “Boundaries” has achieved following the Fonda controversy will affect ticket sales at theaters remains to be seen.