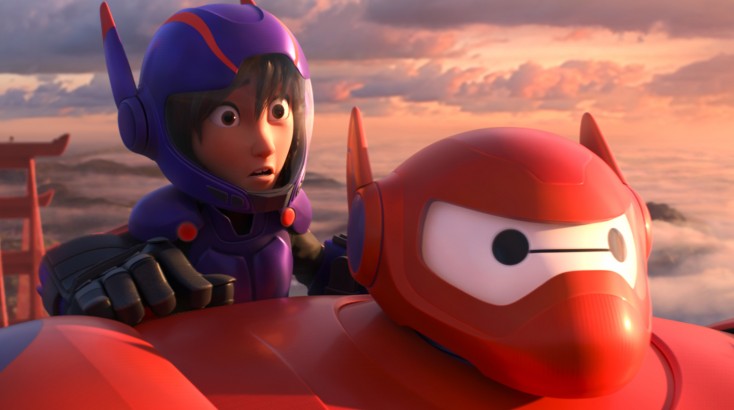 HOLLYWOOD—It’s been 16 years since a major Disney animated movie featured an Asian hero as a lead character with “Mulan.” Now, from the producers of “Frozen” and “Wreck-It-Ralph,” the Mouse House’s “Big Hero 6” showcases a multicultural group of superhero characters, which are played by actors of different races.

Asian-American actor Ryan Potter voices the hero of the film, 14-year-old Hiro Hamada. Another Asian-American cast member is Jamie Chung, who plays his friend and classmate GoGo Tomago. Wasabi is played by African-American Damon Wayans Jr. Honey Lemon is played by Hispanic actress Genesis Rodriguez. While Fred, the sole Caucasian is the bunch, is played by T.J. Miller, who is white.

Hiro’s brother Tadashi (voiced by Daniel Henney, who is of Korean and Irish descent) inadvertently brings the group together to fight evil with his cutting edge-robot Baymax (voiced by “30 Rock’s” Scott Adsit). Baymax is an inflatable robot originally programmed as a personal health care assistant.

The animated fantasy adventure, co-directed by Don Hall and Chris Williams, is a Marvel property that is mostly influenced by Japanese culture, including the hybrid city of San Fransokyo, featuring the physical elements of San Francisco and Tokyo. Both Daniel Henney and Ryan Potter have been highly vocal about the fact that the lead characters in this major Hollywood film are Asian.

Hiro is urged by his brother Tadashi to stop betting on robot battle games and use his talents for a more worthwhile project like he has with his robot Baymax invention. But tragedy strikes and Hiro must decide if he will help capture a masked villain with his newly found friends turned superheroes and reboot the helpful Baymax into a butt-kicking crimefighter.[private]

During an interview with Henney, Potter, Chung, Wayans and Rodriguez at the Walt Disney Animation Studio, they spoke about the film’s diverse characters and cast, working solo in a sound booth and revealed which superhero characters they would like to be if they could.

Q: Daniel and Ryan, you play brothers in the film. Having to work in the sound booth solo, how were you able to connect with your characters along with creating the bond as brothers?

Daniel: We hadn’t met beforehand, and we didn’t meet until the movie was finished. I really relied on the directors to tell me what (Ryan) has done in the booth. I got the vibe and tone in what moments to hit correctly, so I can work with him in a way. It’s a bit weird. We have a brotherly connection in a weird way. We come from similar backgrounds. It’s definitely there.

Q: How exciting is it to represent your culture being Asian-American in a Disney film that hasn’t had major character in nearly a generation?

Ryan: I think someone said that we’re the first biracial Disney characters. That kind of blew my mind. I was going back and thinking about it and I was like, “Yeah, We kind of are.” I’m very fortunate and proud to play Hiro. I’m sure you are as well (motioning to Daniel).

Daniel: It’s a thing where I’m proud to be involved in it for many reasons, but it’s also who these characters represent in the world. Asian men are kind of marginalized and de-sexualized sometimes, in a way. These characters are not. These characters are strong, smart and charming young men and that’s what makes me so proud. I think of myself like that sometimes. That’s who I am as an Asian man. We’re strong people and that’s nice to be represented that way in this film.

Q: Tell us a little bit about the process of recording the voices. Did some of you work together or did you work separately like Daniel and Ryan?

Jamie: We all worked separate. I think with the busy schedules that we have, it would’ve been hard to get us all in a room together. What I love is the attention to detail and with individual characters they can really concentrate on your character and perfect and mold it. You have to leave your fears at the door because you have to be fearless in the sound booth and just go for it and have fun.

Q: Did you see the film already and, if so, did it seem like they took some of your own personal characteristics and included them in the movement of your character?

Damon: Yeah. What was super-interesting to me was you go into the booth and say your lines several times maybe 10-15 times, each line. In your head, you’re going, “This is kind of redundant,” but the outcome… They know how to use one of those variations to plug into those scenes and it makes it seem like we’ve all been recording together the whole time. They’re like scientists when it comes down to story, character and art. Disney is like bar none. No one can touch them.

Q: Jamie, you’re from the Bay area. How was it to see that they took portions of San Francisco and created San Fransokyo?

Jamie: It was so cool for the first 10 minutes. What I loved about the movie is that the animators stayed true to geographically how the city is. In terms all the great landmarks, like the Transamerica building with a “Big Hero 6” flare or the Golden Gate Bridge, it was really nostalgic in a strange way.

Jamie: Treasure Island. It was cool.

Q: Would you be like your characters in real life?

Jamie: I mean I wish I was cool as GoGo in real life. I wish I were as fearless as her. She was really like… nothing bothered her. She really took control of the situation when she took over the car. I don’t know. I’d love to be her.

Damon: I enjoy danger. I’d definitely be the frontrunner of the group. I might die first but it doesn’t matter. I’d die a martyr.

Genesis: Honey Lemon is a very heightened version of myself. I’m not as hyper as Honey Lemon and I’m not as high in the voice. I’m big in justice and fighting for what I believe in, so I definitely am like my stronger female character. Honey and GoGo are such cool tough girls.

Ryan: Hiro is much smarter than I am. He can get into much bigger trouble than I can. I think if we were brothers in real life, he’d be reeling me in.

Q: If you could have any of the superhero powers from this film, what would they be and why?

Ryan: Honey Lemon. I want to be Honey Lemon. I mean to be able to have all those different (chemical) elements in your purse and mix them up, that would be so cool.

Daniel: It’d probably be Honey Lemon for me too. I think GoGo is really cool as well.

Q: Why do you think audiences should see this film?

Genesis: It’ unlike any other Disney movie I’ve seen. It has so much going on with it. It’s a comedy. It’s an action adventure movie. It has so much of the comic book elements, the action sequences. Then again, it’s going to choke you up and make you cry. It really is a roller coaster ride that you have to go on, and it’s beautiful. It’s visually stunning in terms of the city. The flying sequences are the most beautiful things I’ve seen in animation. I think everyone who sees it will fall in love with Baymax. I can’t wait.

Jamie: What’s great about “Big Hero 6” is that it stays true to past Disney animation films. It really is such a well-made movie. It’s just visually stunning and it’s got a whole lot of heart, the story is fantastic, it’s all about family and it’s funny. [/private]