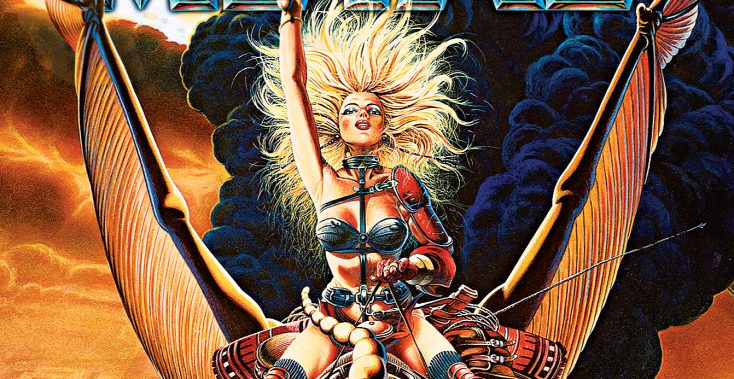 THE GIRL CAN’T HELP IT. (DVD Artwork). ©The Criterion Collection.

The Girl Can’t Help It (Comedy)

The 1956 comedy classic “The Girl Can’t Help It” arrives is a special Criterion Collection edition on Blu-ray and DVD Tuesday April 19.

In 1956, Frank Tashlin brought his talent for zany visual gags and absurdist pop-culture satire that he’d honed as a master of animation to the task of capturing, in glorious DeLuxe Color, a brand-new craze: rock and roll.

This blissfully bonkers jukebox musical tells the story of a mobster’s bombshell girlfriend—the one and only Jayne Mansfield, in a show-stopping first major film role—and the washed-up talent agent (Tom Ewell) who seeks to revive his career by turning her into a musical sensation. The only question is: Can she actually sing?

A CinemaScope feast of eye-popping midcentury design, “The Girl Can’t Help It” bops along to a parade of performances by rock-and-roll trailblazers—including Little Richard, Fats Domino, Julie London, Eddie Cochran, the Platters and Gene Vincent—who light up the screen with the uniquely American sound that was about to conquer the world.

Based on the fantastical illustrated magazine of the same name, “Heavy Metal” was produced by Ivan Reitman who enlisted the help of some of Hollywood’s animation masters to create the otherworldly tale of a glowing green orb from outer space that spreads destruction throughout the galaxy. Only when encountered by its one true enemy, to whom it is inexplicably drawn, will goodness prevail throughout the universe.

“Heavy Metal” is directed by Gerald Potterton from a screenplay by Dan Goldberg and Len Blum. It is based on the art and stories by Richard Corben, Angus McKie, Dan O’Bannon, Thomas Warkentin and Bernie Wrightson.

Based on his 2015 Tony award-winning play of the same name, writer-director Stephen Karam’s debut drama “The Humans” arrives on Blu-ray + Digital and DVD Tuesday April 19, from Lionsgate.

A Life Among Whales (Documentary)

Just in time for Earth Day, the deep-sea documentary “A Life Among Whales” arrives on DVD/Digital Tuesday April 19, from Indiepix Films.

Until recently, whaling was more or less universally accepted and whales were seen as resources to be exploited rather than thinking, feeling animals with their own intrinsic value. But thanks to the work of passionate conservators such as Dr. Roger Payne, a renowned whale biologist and activist credited with spearheading global public awareness of the plight of whales, the world no longer turns a blind eye to these beautiful ocean behemoths.

Weaving together a unique hybrid of natural history and biography, the award-winning “A Life Among Whales” is a fascinating exploration into Payne’s life and pioneering work in the 1960s and 1970s. The documentary features remarkable cinematography and captures Payne’s infectious spirt and fascinating discoveries.

Winner of the prestigious Silver Hugo Education Award, “A Life Among Whales” from director Bill Haney (“The Price of Sugar,” “American Violet”) is narrated by Payne himself. Haney chronicles the biologist’s remarkable career, kicked off by his controversial discovery in the early 1970s that whales “sing” songs. This revelation helped ignite the modern-day environmental movement and Payne’s pioneering spirit has constantly advanced the boundaries of science and activism over the ensuing four decades.

Bonus features include a director’s intro and whale songs—two tracks from Payne’s landmark album “Songs of the Humpback Whale” from 1970.

After the discovery of a mysterious VHS tape, a brutish police S.W.A.T. team launches a high-intensity raid on a remote warehouse, only to discover a sinister cult compound whose collection of pre-recorded material uncovers a nightmarish conspiracy.

Bonus features on the Blu-ray and DVD editions include a behind-the-scenes featurette, the San Diego Comic-Con panel, a commentary with the filmmakers and producers, deleted and extended scenes, and more.

Contestants Discuss Their Blind Auditions on NBC’s ‘The Voice’