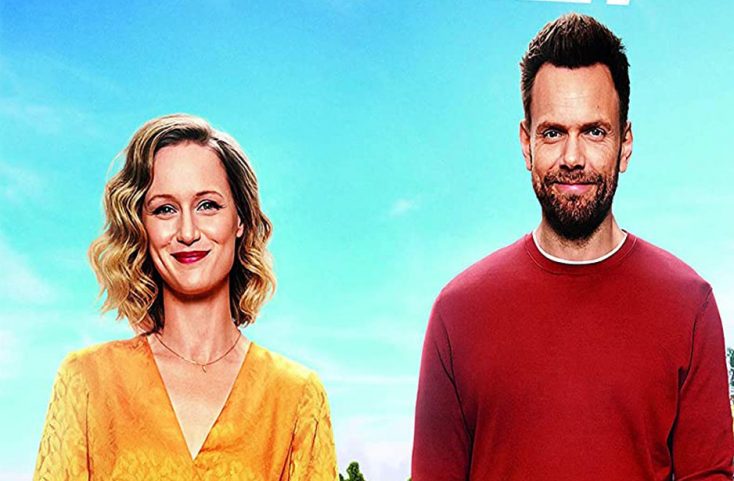 Desperate for cash to save his deathly ill mother, college wrestler Ali (George Kosturos, “American Wrestler: The Wizard”) enters the hidden world of underground fighting. Ali shows promise but, lacking skills, he gets beaten bloody. Duke (Sean Patrick Flanery “The Boondock Saints”), a troubled handler, takes pity on the boy and trains him to be a fierce competitor—but is it enough to make Ali a winner? Based on a true story, this gritty action tale is directed by Shaun Piccinino from a screenplay he wrote with Brian Rudnick and Carol Morris. The film also stars Tommy Flanagan (“Sons of Anarchy”).

The action tale also can be seen in select theaters and everywhere movies can be rented.

A happily married couple (Joel McHale and Kerry Bishé) discover their friends are resentful of their lustful relationship in “Happily,” arriving on DVD Tuesday May 25, from Paramount Home Entertainment.

In this thriller written and directed by BenDavid Grabinski, a visit from a mysterious stranger leads to a dead body, and the couple begin to question the loyalty of their so-called friends. Stephen Root, Paul Scheer, Breckin Meyer, Natalie Zea and Natalie Morales also star.

“Happily” also is available now in select theaters, On Digital and On Demand.

When down-on-his-luck Bart (Finn Wittrock, “American Horror Story”) has a chance encounter with the enigmatic Vienna (Zoë Chao, “Love Life”), the two fall fast and hard. An enchanted weekend courtship leads to unexpected revelations, but the secrets both carry could be their undoing or the chance for a fresh start.

Relive the romance, music, and comedic charms of the indelible classic “My Fair Lady,” debuting on 4K Ultra HD Tuesday May 25, from Paramount Home Entertainment.

Winner of eight Academy Awards, including Best Picture, the romantic comedy also won the Best Picture Golden Globe and was selected for the Library of Congress’ National Film Registry. Adapted from the Broadway stage hit, the film stars Rex Harrison as Professor Higgins, a role that earned him the Oscar for Best Actor in a Leading Role, and Audrey Hepburn as the unforgettable Eliza Doolittle.

The 4K Ultra HD release features stunning picture quality courtesy of a recent 8K film transfer, as well as English 7.1 Dolby TrueHD sound for the finest home presentation. The 4K Ultra HD/Blu-ray Combo also includes access to a digital copy of the film and more than two hours of previously released bonus content, including a making-of, vintage video of the 1963 production kick-off dinner, the 1964 premiere in Los Angeles, a radio interview of Rex Harrison, production tests, theatrical featurettes and much more.

The highly-stylized thriller “Nina Wu” arrives on DVD/Digital Tuesday May 25, from Film Movement.

After years of toiling in bit parts, aspiring actress Nina Wu (Ke-Xi, “The Road to Mandalay”) finally gets her break as the female lead in a big-budget espionage thriller. The role, which calls for nudity and explicit sex scenes, is made all the more challenging by the director’s savage belittlements. Hovering on the brink of stardom, Nina’s psychological resolve begins to crack under the pressure. As she clings to her sanity, a traumatic past event begins to resurface.

This sumptuous, stylized thriller, reminiscent of David Lynch’s “Mulholland Drive,” Darren Aronofsky’s “Black Swan” and other poison pen letters to the entertainment industry, it premiered at Cannes in 2019 in the Un Certain Regard Competition, and captured the Audience Choice Award at the Malaysia Golden Global Awards and Best Screenplay at the To Ten Chinese Film Festival.

The DVD/Digital of “Nina Wu,” which includes bonus behind-the-scenes featurettes, will be available for $24.95 (SRP). It is in Mandarin with English subtitles.

Long ago, in the fantasy world of Kumandra, humans and dragons lived together in harmony. But when sinister monsters known as the Druun threatened the land, the dragons sacrificed themselves to save humanity. Now, 500 years later, those same monsters have returned and it’s up to a lone warrior, Raya, to track down the last dragon in order to finally stop the Druun for good. However, along her journey, she’ll learn that it’ll take more than dragon magic to save the world—it’s going to take trust as well. From directors Don Hall and Carlos López Estrada, co-directors Paul Briggs and John Ripa, producers Osnat Shurer and Peter Del Vecho, the film features the voices of Kelly Marie Tran as Raya and Awkwafina as Sisu.

The Blu-ray contains bonus extras including the animated short, “Us Again.” Other bonus features include: An Introduction to “Us Again,” in which director Zach Parrish takes viewers behind the scenes of the Walt Disney Animation Studios short; “Us Again” in which an elderly man and his young-at-heart wife rekindle their passion for life on one magical night; Taste of Raya, a dine-along with Kelly Marie Tran and the film’s creative team—virtually—over a Southeast Asian menu inspired by the countries that influenced the film as they discuss their experiences creating the world of Kumandra; Raya: Bringing it Home is about how during the global pandemic of 2020, production of “Raya and the Last Dragon” moved to the houses of over 450 people.

Peer through a window into their lives and learn how they overcame massive obstacles to make an animated feature from home; Martial Artists, where viewers can get a kick out of learning about the martial art forms and weapons used in the film as co-screenwriter Qui Nguyen and visual anthropologist Dr. S. Steve Arounsack share the inspiration behind the film’s action-packed elements; We are Kumandra, where viewers can meet members of the Southeast Asia Story Trust and discover the cultural influences that inspired the film … and how important this representation in a Disney animated film is to the people of the region; outtakes; fun facts; and deleted scenes.

Four family-friendly movies starring the beloved Peanuts gang are available now on Blu-ray for the first time in the “Snoopy Collection,” from Paramount Home Entertainment.

The “Snoopy Collection” also includes access to digital copies of each of the films, all of which were written by Peanuts creator Charles M. Schulz.

The live-action adventure tells the story of six friends who witness a train wreck while making a Super 8 movie, only to discover that something unimaginable escaped during the crash, and the only thing more mysterious than what it is, is what it wants.

The 4K Ultra HD release includes access to a digital copy of the film and more than two hours of previously released bonus content including a commentary by Abrams, producer Bryan Burk and director of photography Larry Fong, making of featurettes, deleted scenes, Easter eggs and more.

David Oyelowo’s directorial debut feature “The Water Man” will be available On Demand and on Digital platforms beginning May 25, from RLJE Films.

Gunner (Chavis) is a teenage boy who sets out on a quest to save his ill mother (Dawson) by searching for a mythic figure who possesses the secret to immortality, the Water Man. After enlisting the help of a mysterious local girl, Jo (Miller), they journey together into the remote Wild Horse forest — but the deeper they venture, the stranger and more dangerous the forest becomes. Their only hope for rescue is Gunner’s father (Oyelowo), who will stop at nothing to find them and, in the process, will discover who his son really is.

David Tennant (“Doctor Who,” “Broadchurch”) stars as Dennis Nilsen, one of the most infamous serial killers in UK history in the Sundance Now exclusive series “Des.” The series is available now on Blu-ray and DVD, from Sundance Now.

Known as the “kindly killer,” Nilsen was an unassuming civil servant who spent five years murdering young men he met on the streets of Soho. When he was finally caught in 1983, he had murdered 15 victims, making him Britain’s most prolific serial killer of the time.

Daniel Mays (“Line of Duty”) and Jason Watkins (“The Crown”) also star in this chilling series that delves into Nilsen’s emotionally elusive psyche after his arrest. The three-episode series premiered on Sundance Now.

The “Des” Blu-ray and DVD include a bonus 10-minute behind-the-scenes making of featurette. Each is available for $29.99 (SRP).

“Infinity Train: Book Two” will be released on DVD Tuesday May 25, from Warner Bros. Home Entertainment.

“Infinity Train: Book Two” follows Mirror Tulip, an escaped reflection from the mirror world, and Jesse Cosay, a 14-year-old jock from Arizona. As the pair finds themselves on the run from the mirror police, themes of identity, friendship and peer pressure arise.

Go on an epic journey with all 10 episodes from the second season and bring home more than an hour of bonus features including commentaries, animatics and an image gallery.

“One Lane Bridge,” a crime drama series set in New Zealand, arrives on DVD Tuesday May 25, from Acorn TV.

In this dark crime drama with a supernatural edge, a small town is upended when a local man’s body is found at the bottom of a one-lane bridge that’s long been a locus of unexplained events. While investigating the murder, an ambitious Māori detective inadvertently reawakens his second sight, a gift that endangers his life but may help solve the mystery of the sinister landmark. The series premiered on Sundance Now.

The two-disc DVD set includes all six episodes of this exciting crime drama, and is available for $39.99 (SRP).

Sarah Snook (“The Dressmaker”) stars in this sci-fi drama set 15 years in the future. Science has made a discovery that changes the lives of everyone on the planet—a test that unequivocally tells you who your soulmate is. Each of the six episodes in the anthology series features a different cast and explores an entirely new story around discovering (or opting not to discover) the results of this new test and the impact of those results on a myriad of relationships.

“Soulmates: Season One” includes a behind-the-scenes look at the making of the series.

After 15 incredible seasons, Warner Bros. Home Entertainment marks the end of an era with the release of “Supernatural: The Fifteenth and Final Season” and “Supernatural: The Complete Series.” Both sets will be available on Blu-ray and DVD beginning Tuesday May 25.

Carry on with the thrilling and terrifying journey of the Winchester brothers in Supernatural: The Complete Series. Sam (Jared Padalecki) and Dean (Jensen Ackles) face everything from demons to vampires, ghosts, angels and pagan gods. And with the help of the fallen angel Castiel (Misha Collins), they discover that every threat they vanquish opens a new door for evil to enter.

“Supernatural: The Fifteenth and Final Season” contains the final 20 episodes from the landmark series’ final season, as well as a bonus disc loaded with over two hours of special features including the special retrospective episode “Supernatural: The Long Road Home.” Also on the bonus disc, and exclusive to Blu-ray and DVD, are two all new featurettes, deleted scenes and a gag reel. The set will be available on DVD for $44.98 (SRP) in the U.S., and $49.99 (SRP) in Canada, and on Blu-ray which includes Digital Copy (U.S. only) for $49.99 (SRP) and $54.97 (SRP) in Canada.

With Blu-ray’s unsurpassed picture and sound, “Supernatural: The Complete Series” and “Supernatural: The Fifteenth and Final Season” will be released in 1080p Full HD Video with DTS-HD Master Audio for English 5.1. Both Blu-ray sets will feature a high-definition Blu-ray and a Digital Copy (US Only) of all episodes.